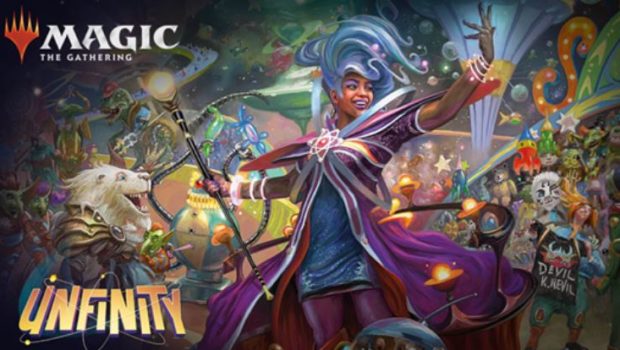 Step into a cosmic carnival with Magic: The Gathering Unfinity!

Come one, come all! Wizards of the Coast today released Unfinity, the latest set for the world’s oldest and best trading card game, Magic: The Gathering (MTG). Unfinity is the first-ever black bordered un-set that sweeps players into a sci-fi carnival of cosmic proportions with hilarious and fun new mechanics. The set contains 244 cards and releases for tabletop today.

There’s more than just magic to be found in the vibrant and wacky cosmic carnival of Unfinity. Unfinity doesn’t just break the rules, but blasts them into space by being the first un-set that contains black-bordered “eternal” cards that are legal for Commander, Legacy and Vintage play. Some cards, however, are just meant for the circus: these are characterised by an acorn-shaped holofoil that indicates they’re intended for casual play only.

Hilarity abounds in Unfinity, with ridiculously fun new mechanics following the space and carnival themes. New Artifact cards called Attractions will bring the carnival experience to any match, triggering different abilities based on the roll of a six-sided die each turn while the card is in play. Featuring minigames such as ‘Dart Throw’ or locations like ‘The Superlatorium’ that offer unique interactivity and in-game prizes, attractions are a crucial part of any Unfinity Draft. The new set also introduces Stickers, allowing players to boost the power/toughness of their cards or activate new abilities through sticking new names, art and stats to existing cards. These can be purchased with Tickets, a new resource counter found on most cards that can be customised with stickers.

Collector’s will marvel at Unfinity’s stunning suite of out-of-this-world lands, including reimaginings of the Ravnica dual-lands, affectionately dubbed ‘shock lands’ by Magic’s community. The entire set of shock lands is available in borderless cosmic artwork from box toppers, draft boosters and collector boosters. To really embrace the sci-fi, Orbital and Planetary “space-ic” lands are also up for grabs in foil, non-foil and flashy new Galaxy foil treatments, showcasing the marvellous spacescape awaiting beyond the colourful carnival.

The spoils don’t end there. Unfinity also pay’s homage to an atomic-futurism-meets-MTG aesthetic with eye-popping showcase cards, retro-fying 30 Legendary creatures with the “Showcase Cards of Tomorrow”. For players who also miss the classic un-installments, ‘The List’ for Unfinity features 60 cards from previous un-sets in silver-border frames.

Unfinity will be available as Draft Boosters and – for the first time for an Un-set – Collector Boosters.