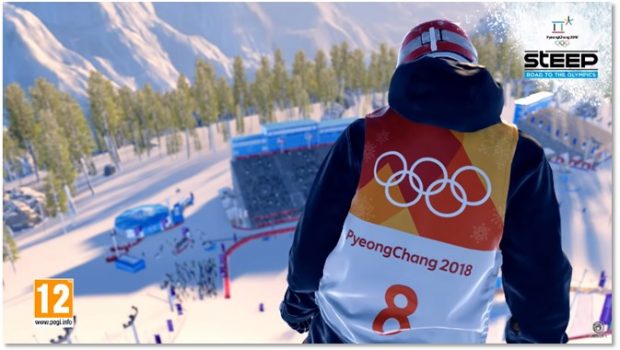 Sydney, Australia — October 13, 2017 — Today, Ubisoft® announced that Steep™ Road to the Olympics, an expansion to the open world action-sports game Steep (launched in December 2016) and an Official licensed product of the Olympic Winter Games PyeongChang 2018, integrates a variety of professional athletes from all around the world into the in-game story mode. Available on December 5, 2017 on PlayStation®4 computer entertainment system (includes enhanced features on PS4 Pro), Xbox One (includes enhanced features on Xbox One X) and Windows PC, Steep™ Winter Games Edition will include Steep™ base game and Steep™ Road to the Olympics expansion and are now available for pre-order.

In Steep™ Road to the Olympics story mode, players will experience the journey of a young athlete training in three freestyle events (Big Air, Half Pipe and Slopestyle) to reach the Olympic Winter Games and be the first athlete ever to win gold in 3 freestyle disciplines. The competition takes place in the unique South Korean mountains, where the Olympic Winter Games PyeongChang 2018 are being held this coming February. Players will also be able to explore the mountains of Japan, carving through unique powder and exceptional environments.

Before each challenge, players will be treated to training tips and insights from Olympians on the variety of Steep™ Road to the Olympics events, track designs and the competition itself. Video testimonials from 10 legends and rising stars will be integrated in-game: Lindsey Vonn, American Alpine Skiier who has won numerous competitions including a gold medal in the downhill event at the Olympic Winter Games 2010; Kevin Rolland, French freestyle skier and progressive risk taker who won an Olympic bronze medal in the halfpipe at the  Olympic Winter Games Sochi 2014; Sage Kotsenburg, American snowboarder who won the first-ever Olympic gold medal in men’s snowboard slopestyle at the  Olympic Winter Games Sochi 2014; Ayumu Hirano, Japanese competitive snowboarder who won an Olympic silver medal in the halfpipe 2014 Olympics; Alexis Pinturault, a French alpine ski racer and Olympic medalist in 2014 for Giant Slalom; Tessa Worley, a French competitor of all five alpine disciplines and specialist of Giant Slalom; the Australian snowboarder Scotty James, a 2x world Halfpipe champion and 2017 Superpipe champion; Gus Kenworthy, a American freestyle skier who won the silver medal in Ski Slopestyle at the Olympic Winter Games Sochi 2014; young American snowboarder and 2017 Slopestyle snowboarding champion, Julia Marino and Bode Miller, an Olympic gold medalist and the most decorated male American alpine ski racer of all time.

The expansion Steep™ Road to the Olympics can be purchased for 30€ and Steep™ Winter Games Edition that includes the base game Steep and the expansion can be purchased for 50€. Steep™ Winter Games Gold Edition, with the base game Steep, the expansion, and the Year 1 Season Pass, which gives players access to three previously-released DLC packs featuring additional sports, challenges and outfits will be available for 70€.

With development led by Ubisoft Annecy*, Steep – the open world action sports game featuring ski, snowboard, paraglide, wingsuit, rocket wingsuit, sled, base jump and speed riding – is designed for a culture that’s all about sharing experiences with the world. Steep features seamless multiplayer, populating the world with players as they explore the Alps and Alaska. Players and friends across the globe can take on challenges together, or compete with each other to snag the top spot on the leaderboards. The game’s replay feature expands this experience, allowing players to relive their wildest tricks and memorable lines and even share them as videos on social media. It doesn’t stop there, as challenges can be created from any line to compete with friends and achieve the best time or score based on customizable factors, such as completing tricks to score. Players can also participate in several competitive live programs such as the monthly Steep World Tour, where players take on specific challenges to qualify in tournaments and have a chance to win exclusive rewards.