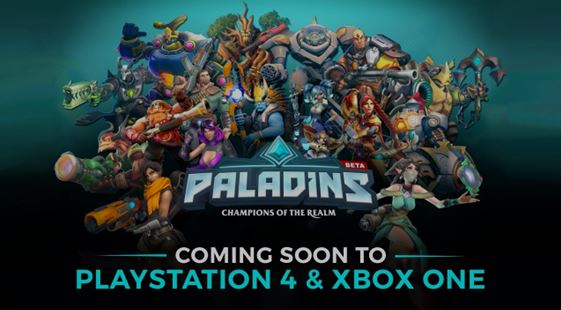 October 3, 2016 – Melbourne, VIC – Xbox One and PlayStation 4 gamers will soon be able to play Paladins: Champions of the Realm, the new hit team-based shooter from SMITE developer Hi-Rez Studios.

Paladins is a Free-to-Play fantasy-themed first-person shooter which has taken the PC gaming world by storm in recent weeks. The game drew more than 1 million players in its first 10 days on Steam Early Access. Paladins is now consistently one of the top 10 most-played games on Steam, and is regularly in the top 3 on the Steam Free-to-Play charts.

“We’ve been overwhelmed by PC gamers’ response to Paladins so far,” said Todd Harris, Co-Founder and Chief Operating Officer of Hi-Rez Studios. “But the number of tweets, e-mails, and posts from gamers demanding Paladins on their favourite console has been equally overwhelming.”

Fortunately for Xbox One and PS4 owners, Paladins was designed with console in mind from day 1 of development. The control scheme was polished by big-name console gamers, ensuring Paladins feels just right to console shooter enthusiasts.

In Paladins, players fight their way through a fantasy world known as the Realm. There, they compete in competitive team-based multiplayer matches, fighting over gold and mysterious crystals.

Players take control of one of 17 Champions in every match, ranging from a deadly sniper to a mech-riding goblin, a mystical elf, a jetpack-clad dragon, and a bomb golem. New Champions are added to the realm regularly, keeping gameplay fresh and exciting.

Each Champion can be customised to fit each player’s unique play style through an innovative collectible card system. Players build their own decks of cards to amplify and augment each Champion’s core set of abilities, empowering their personalised play styles.

Paladins is free to download and play on all platforms. All gameplay content can be unlocked free of charge, while cosmetic items are available for purchase.