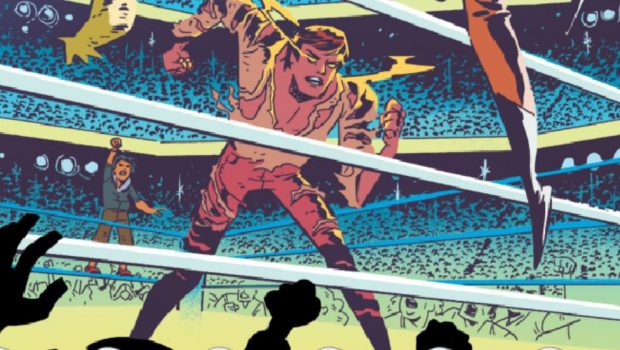 AHOY Comics’ election to determine which STEEL CAGE feature is to be awarded its own series has ended. The deadline for online voting has passed. The ballots have been counted.

As editor-in-chief of AHOY Comics I must now inform you, with deep regret, that evidence exists of serious voting irregularities. The total number of ballots cast bears no discernible relation to STEEL CAGE’s circulation figures. One feature, which trailed significantly over the first week, gained a huge majority in one day, perhaps in minutes–an insurmountable lead it maintained to the end.

Our technicians inform me that this could have been the work of a few quick keystrokes, perpetrated by almost anyone–from the despicable agent of a rogue government to a lonely, misguided teenager.

Make no mistake. No one at AHOY is accusing any STEEL CAGE creators of wrongdoing. Every one of our writers, artists, colorists, letterers, designers, and production staff comported themselves honorably and with dignity throughout this process. We respectfully salute one and all.

Nevertheless, due to the alarming evidence of tampering–I do not, I will not, I cannot certify this election.

Instead, in fairness to the creators and to the readers who voted for them, all three candidates will be awarded their own series. Beginning next year, watch for the announcements of NOAH ZARK #1, BRIGHT BOY #1, and TRUE IDENTITY #1, worthy comics all.

We launched this effort with every intention of carrying out the will of the majority. It is the precious right of all comic book fans to go about their work, pursue their studies, and tuck their children in at night secure in the knowledge that their votes have been counted. AHOY’s commitment to the democratic system of comics remains unshakable. With the support of our publisher, Hart Seely, and our entire staff, I call upon all relevant authorities to investigate this unspeakable outrage and bring the offenders to justice.