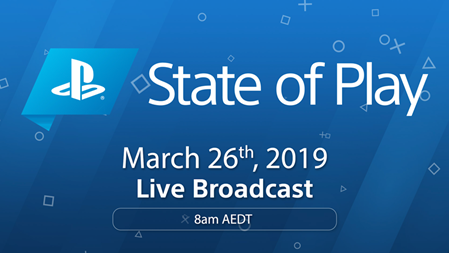 Exciting news to share! The debut of PlayStation’s brand-new video showcase, State of Play, is taking place tomorrow at: Tuesday 26th March at 8.00am AEDT.

State of Play will share updates and announcements from the world of PlayStation. This first episode will showcase upcoming PS4 and PS VR software, including new trailers, new game announcements and new gameplay footage.

PlayStation fans around the world can also expect State of Play to return throughout the year with more updates and announcements.

This episode will be available to watch live on Twitch, YouTube, Twitter or Facebook worldwide, and we’ll be offering up the VOD edition shortly after the episode airs.

Keep a close eye on the official PlayStation AU social channels or head over to PlayStation Blog for more information and where to tune in.