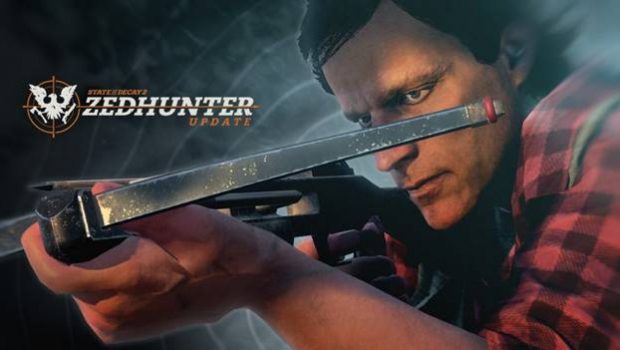 Today, to celebrate and thank the 4 million strong State of Decay 2 community, we’re releasing the Zedhunter Update to Xbox Game Pass subscribers and current players for free. Players will get this pack, which adds a wealth of new options and ways to enjoy the game, as part of a content update beginning today – it’s our way of saying thanks to the 4 million of you who have supported our game since launch.

At X018 last weekend, we provided some initial details for the Zedhunter Update and how it brings new weapons and gameplay items to your community, but now we’re ready to give you a deeper dive into the Zedhunter Update’s additions. The Zedhunter Update integrates into your main community game and adds an iconic zombie-slaying weapon: crossbows, with eight new types now available! This is big, as crossbows are silent and powerful weapons – for example, scoped crossbows can more easily score headshots without drawing any attention or aggression from other zombies nearby.

Crossbow bolts can also be recovered afterwards (making them the eco-friendliest post-zombie apocalypse weapon around), and unlike traditional firearms, crossbows never jam or break. Because they’re powerful, efficient and silent, using them against a plague zombie gives you a higher chance of extracting a plague sample. The new crossbows might be your go-to weapon, but the Zedhunter Update also comes with three new melee and three new close-combat weapons for the more hands-on and stealthier survivor – giving you plenty of swords and knives to fight enemies with.

Expect even more customization options in the Zedhunter Update; the content update will include the ability to reset a survivor’s core skill specializations. If you ever wanted to switch your Cardio from Marathon to Backpacking you can read a new training manual and then change the specialization of that core skill – though be aware that the trade-off is that you’ll gain experience for this new skill slower than usual. Additionally, we’ve added six new “quirk skills” (like “Hygiene”) which provide new buffs to your survivors or to your community; you can find these skill books by tracking down the Skills Trader when that character visits your town.

One other gameplay addition we’re excited about is the addition of three new potent plague consumables. These can drastically enhance your survivor’s abilities; but we should mention that they’re basically poison to humans, since they involve consuming a touch of plague infection. Maybe a little infection is worth it for the ability to see in the dark or sneak past zombies without drawing their attention – it’ll be up to you to decide.

To help introduce all this new content, we’ve added several missions to the game (and updated others). If you want to experience these new missions, keep an eye out for missions labeled “Mysterious” you may happen across during your quest. Lastly, we’ve added three new achievements for you to attain for as you play through the new Zedhunter Update additions.

As mentioned before, the Zedhunter Update will be free for all SOD2 players – Xbox Game Pass members, Standard Edition and Ultimate Edition owners – beginning today. If you’ve been waiting to jump into the game, now’s the perfect time with the Xbox Black Friday sale coming around the corner. Whether you start a new Xbox Game Pass for just $1 for the first month, or get either the Standard Edition and Ultimate Edition on sale for 35% off, the Zedhunter Update will be ready and waiting for you.

At Undead Labs, we’ve set out to build the ultimate zombie survival fantasy and are committed to delivering that in every way – which is why we’ve also announced that in the near future players can look forward to a new difficulty experience, along with the chance to return to Trumbull Valley in 2019. With today’s free Zedhunter Update, we’re giving our 4 million (and growing) players even more tools to answer the question: how will you survive?