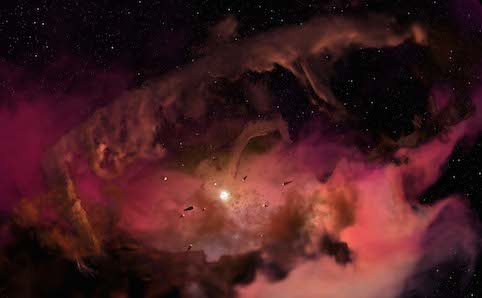 Summary: Seeing Starlight at the Melbourne Planetarium at Scienceworks is quite a jaw dropping experience that almost creates this out of body feeling

Currently playing at the Melbourne Planetarium located inside Scienceworks, Starlight is the latest edutainment film (aka documentary) that takes viewers behind the mystery of stars located in our wide cosmos. The film is told through the eyes of Margaret that is masterfully narrated by Australian actress Sigrid Thornton as this young girl was once scared of the dark but when she was shown the night sky, this fear was replaced with both wonder and curiosity.

As the story behind Starlight progresses, Margaret’s wonder and curiosity soon turns into a thirst for information as she explains to the viewer how starlight can not only be seen at night through the multitude of stars within the Milky Way but also during the day through our own sun that was once known as Sol by the ancient Romans.

The fictitious Margaret goes into some detail about the life and finally death of suns from glorious red giants to stunning white dwarfs and finally supernova explosions which is both easily understood by both adults and children alike. This documentary also informs the viewer about the composition of stars that is quite fascinating to learn about these humble celestial bodies.

To help compliment this amazing story, Starlight boasts some extraordinary computer animation which almost makes it feel like you are on floating through the cosmos as it commences on Earth and moves throughout the universe that eventually takes us back to our home planet. Best of all, this documentary is created in Australia and the end result is truly a spectacular planetarium film.

Seeing Starlight at the Melbourne Planetarium at Scienceworks is quite a jaw dropping experience that almost creates this out of body feeling. Add in the excellent commentary from Sigrid Thornton and Starlight is definitely a must see film at the Melbourne Planetarium that we could happily recommend to the entire family. With a few weeks left of the 2015 summer school holidays left, Scienceworks is definitely the place to be!