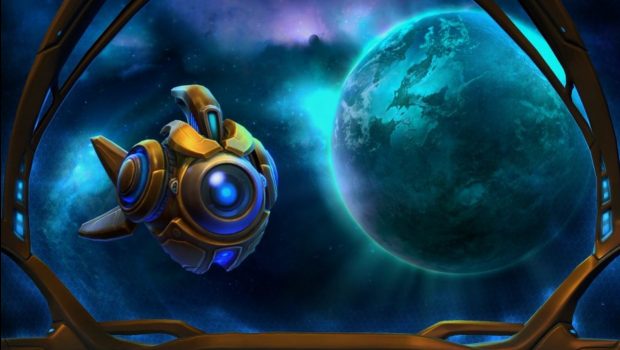 StarCraft’s Probius Prepares to Warp into Heroes of the Storm

During the weekend, at IEM Katowice, Probius from the StarCraft universe was announced as the next Specialist hero to be heading to the Nexus. This little probe will be available to try on the Heroes of the Storm Public Test Realm (PTR) from 7 March, AEDT by downloading the PTR game client via the Battle.net Desktop Application.

To embed the video:

Since his activation, Probius has always wanted to prove himself. He may be small, but he made a big difference by warping in a critical pylon during the retaking of Aiur. As the bravest of probes, Probius is eager to fulfil his purpose in the Nexus. His first trait is Warp In Pylon which generates a power field and grants vision of the surrounding area. His basic abilities include Worker Rush, which adds an additional 50% movement speed for 5 seconds; however be careful, as taking damage ends this effect early. Probius also has Disruption Pulse; a burst of energy that deals 150 damage to all enemies it passes through. Probius can also open an unstable Warp Rift that takes 1.25 seconds to arm, but then slows nearby enemies by 20%, lasting 9 seconds. Warp Rifts hit with Disruption Pulse will explode for 261 damage to all nearby enemies. Pylon Overcharge is the first of his two heroic abilities, and increases the size of Pylon power fields, while also allowing them to attack enemies within it for 110 damage per second, for 10 seconds. Null Gate is his second heroic ability, and allows Probius to project a barrier of negative energy in the target direction for 4 seconds. Enemies who touch the barrier take 64 damage per second and are slowed by 80% for as long as they remain in contact with it. Probius may seem small, but his impressive arsenal will prove invaluable when turning the tide of battle.