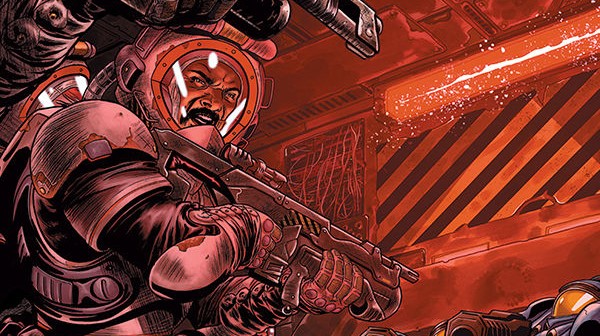 Starcraft Scavengers #3 opens with an intense stand-off between a group of Terran scavengers, and a far superior and heavily armed force of Dominion marines. The scavengers are given the order to surrender, but after one loses his cool and opens fire, they’re met with a hail of bullets in retaliation. This goes about as well for them as one might expect, and the crew of the Magpie is quickly subdued and taken into Dominion custody. This dramatic opening sets the stage for that which is to come. As things progress, it becomes clear that there’s some kind of unexplained threat that was awakened aboard the derelict Protoss vessel the crew of the Magpie was here to (illegally) salvage. Much of this is revealed by the young and inexperienced scavenger, Caleb, and his interrogation at the hands of Dominion Captain Barlow. Written by Jody Houser and with art by Gabriel Guzman, Scavengers is a tale in the same vein as Alien, but set in Blizzard’s Starcraft universe.

The writing is quick and the action intense. When I picked up this issue, I found I couldn’t put it down—I had to find out what would happen next. The characters come across clearly, from Caleb’s youth and inexperience, to Barlow’s stern authoritative presence as a Dominion officer, to the hot-headed firebrand that is Kyra. While my sympathies were with the crew of the Magpie, the story kept me fully aware that not only was their operation illegal, it had crossed over into dangerous territory—Barlow was well within her rights to keep them detained while trying to figure out what had killed the rest of the scavengers on the derelict ship.

The story does an excellent job of maintaining the tone of the Starcraft universe, while still remaining accessible to those less familiar with the setting.

The art is very Starcraft. The Terran marine armor is beautifully rendered, with crisp battle-worn textures and intricately detailed joints. The opaque yellow visors had me instantly picturing the portrait frame of the unit from the video game series so vividly, that I had to go and load up a YouTube video and gorge myself on Terran marine quotes.

The characters and their expressions are drawn with careful attention to their personalities. Caleb’s inexperience easily comes across through his expressions and stance. Barlow’s stern countenance is both authoritative and intimidating.

That said, this story might not be for those who are faint of heart. The gore in this tale starts out fairly mild—smoke curling from the shattered face plate of a dead scavenger’s armor—but quickly progresses to the more visceral. We’re talking eyes being impaled with spikes, blood dripping off boots, and shattered ribs visible through gaping chest wounds type visceral. Nothing feels excessive or out of place, however. Everything that’s drawn is drawn for a reason, and that reason is often to heighten the suspense, or add to the unfolding drama.

Starcraft: Scavengers #3 is a thrilling, suspenseful tale that had me gripped from the very start. This is a Starcraft tale, that is just as accessible for newcomers to the setting as it is for die hard fans. I look forward to seeing what’s coming in the upcoming conclusion. 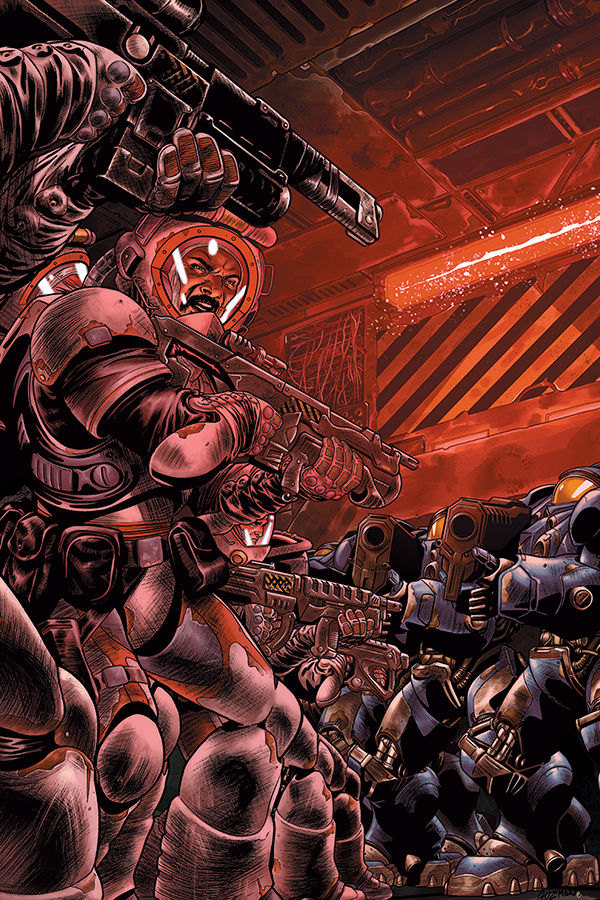