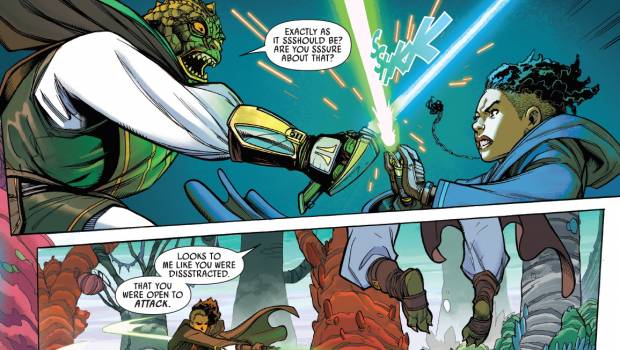 Summary: Starts off a bit slow but still has more action than just explaining like the Eternals first issue. One for the fans who want something new and not just the same characters from the movies.

Set hundreds of years before the events of the Clone Wars when the Jedi were the dominant force in the galaxy and the Old Republic was at its height. Padawan Keeve Travis is undergoing what she thinks will be her trials on a remote planet in the outer rim, but turns out to be a fight for survival. “We planned it that way all along! Ho! Ho! Ho!” Indeed!

This is the start of a whole new storyline for Star Wars where they are going right back before both the prequels and the sequels to carve out a new story. Yoda is featured in the story but is relatively younger at the time. There is a timeline of this story and the new Star Wars shows that are coming out over the next few years included at the start of the book.

With such a blank slate to start with and no original trilogy characters to use the story they tell can be something original and go off in a new direction. There are interesting enough characters here and they did not feel the need to spend half the story explaining what things were and just jumped into the action.

Supposedly this is meant to be part of a much larger shared universe continuity with characters introduced here being able to be used in other stories going forward. As the Mandolorian showed they are not above using characters and ideas from the old expanded universe so hopefully some of the Knights of the Old Republic turn up sooner or later.

While maybe not for the casual fan who is more into the films and Mandolorian, this would be great for people who are more into the Star Wars lore and want something original and that goes in a new direction.