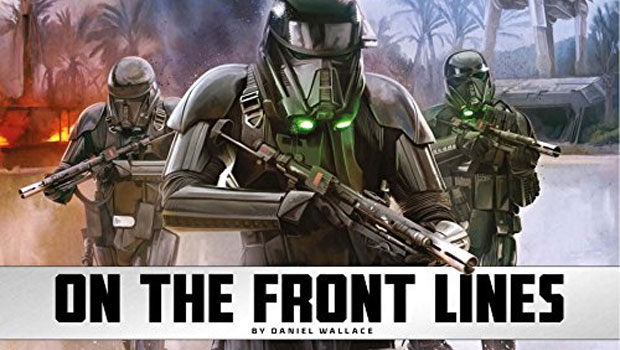 Summary: Star Wars on the Front Lines takes you directly to the key battles of this sci-fi universe!

Written by Daniel Wallace, Star Wars on the Front Lines focuses on the greatest battles of the Star Wars universe with some stunning information and imagery to accompany the text. Before jumping into this stunning hardcover book, the introduction helps the reader put some perspective on the history of Star Wars, including its catalysts.

This information describes how the Republic was created in order to eliminate violence throughout the galaxy that unfortunately became corrupted by the Senator Sheev Palpatine (aka The Emperor). So as Palpatine attempted to gain power, he thwarted his enemies which created the Clone Wars and even though order was restored, it was enforced by the Empire’s harsh might, only to be challenged by the Rebel Alliance which once again changed the status quo. This catalyst then led to the great battles of Hoth, Jakku and finally the rise of the First Order. 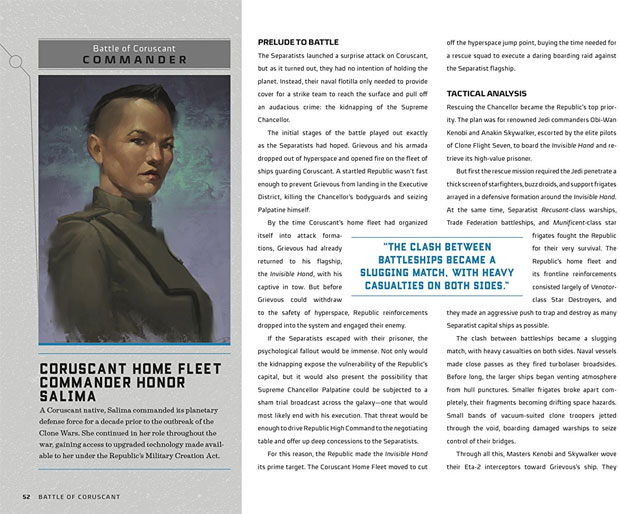 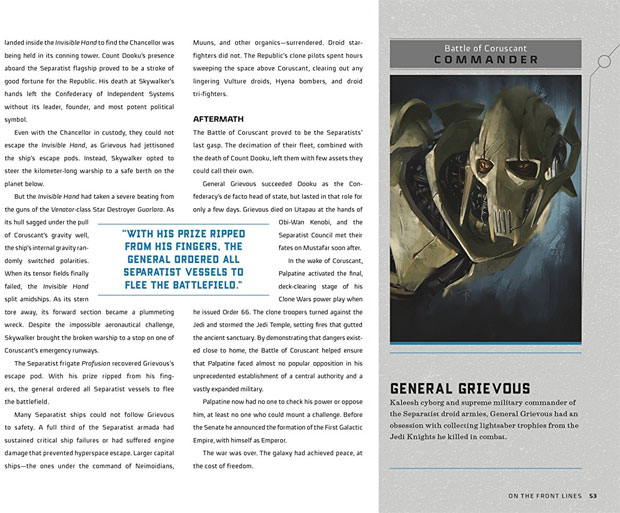 Star Wars on the Front Lines features three parts that include;

which also includes a timeline of the battle plus an acknowledgement section.

The author even includes the key players of the battle such as General Obi-Wan Kenobi and General Whorm Loathsom of the Battle of Christophsis plus an overview of what occurred between the two, including key moments. I like how Wallace adds combatants to the battles, including other ‘tools of war’ like tanks, tie-fighters and of course deadly droids. Complimenting this text are some amazing visuals and although I’ve had limited experience with the cartoon series, this book nicely puts some context on these key battles.

More importantly, this book covers all the films, even last year’s Rogue One with the Battle of Scarif. Each battle has a section called Tales of Valor which showcases the heroes such as Jyn Erso. Although some artistic liberty has been taken by the writer, the sections on “I was there” adds a personal account of the battle itself which is kind of interesting and fun. Add in full colour paintings of these key battles and it’s easy to get quite lost in these pages. 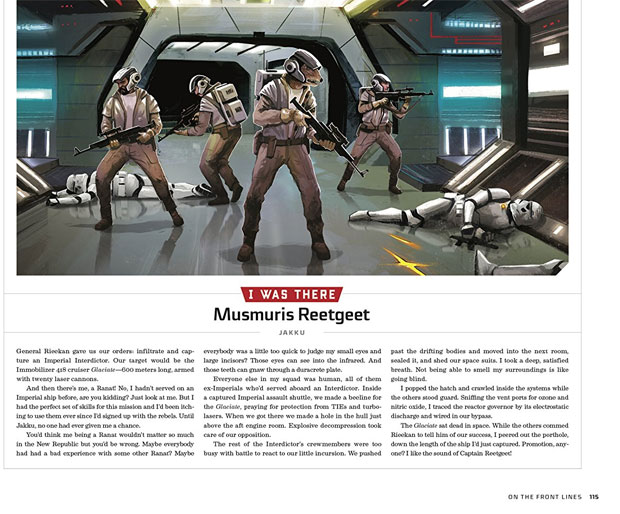 My favourite section was on the Battle of Jakku which was mentioned in Star Wars the Force Awakens and occurred after Return of the Jedi. This part really puts this battle into perspective and fills a vital gap in the Star Wars mythology as although the Empire lost the battle on Endor, it actually took another year until the Rebel Alliance finally vanquished them which was on the planet of Jakku. The last commander of the Empire was Grand Moff Randd who revered the Emperor and vowed revenge on the New Republic. Wallace should also be commended on the text which is easy to read and flows very well. The timeline sections makes for an interesting read, particularly as it links the years between the battles quite well. 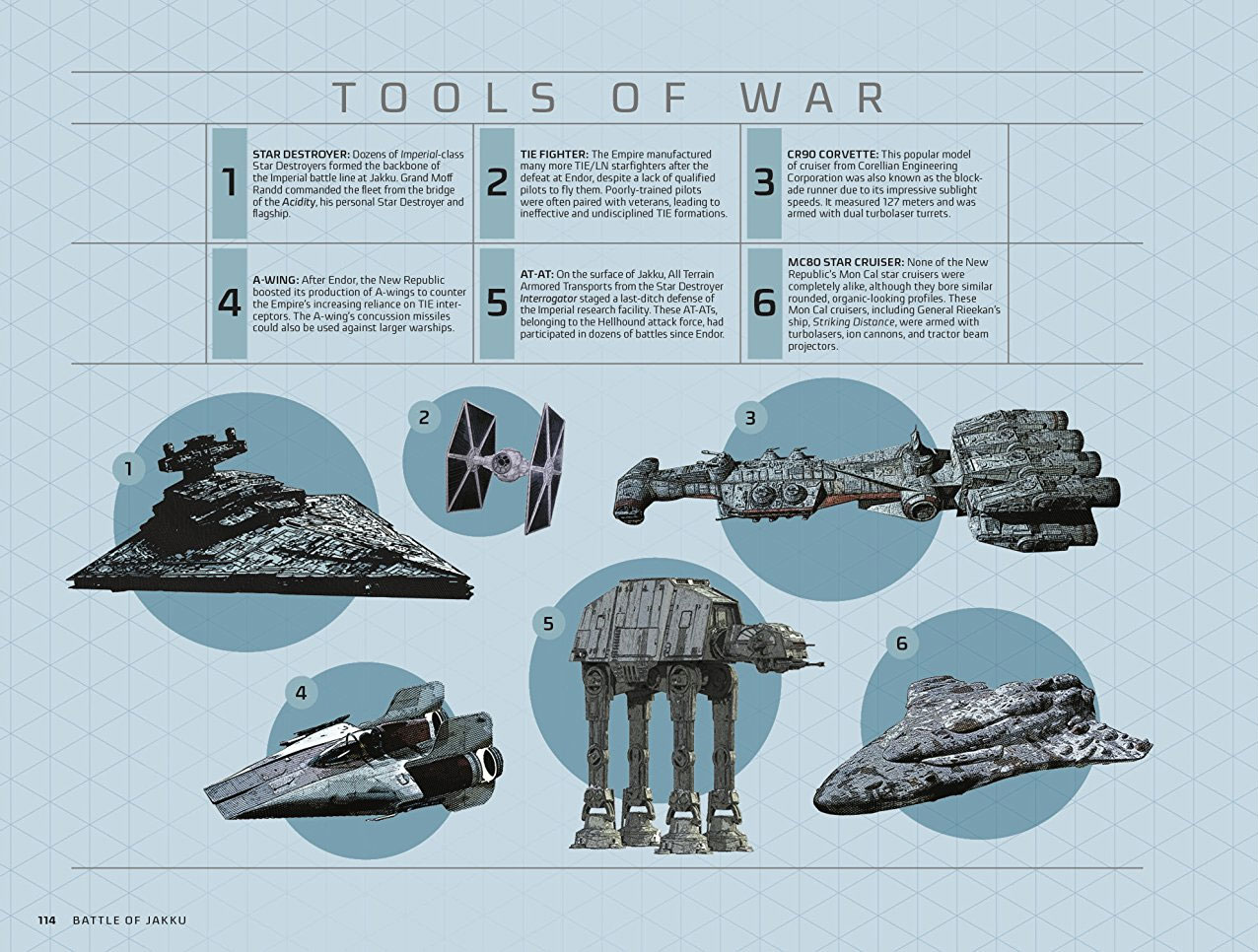 Star Wars on the Front Lines is a must have for any Star Wars fan and if you’re interested in reading about this fictitious sci-fi history, author Daniel Wallace successfully retells these key battles that is matched with some stunning artwork and a great perspectives on what happened.