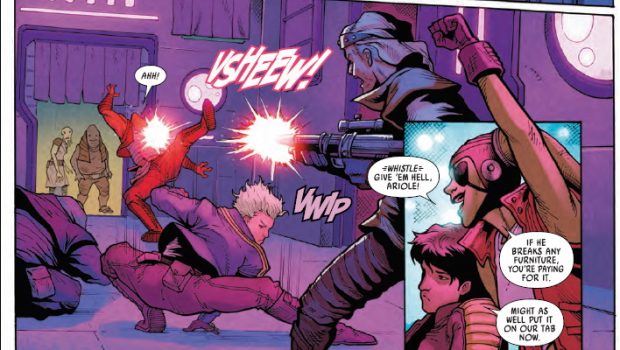 Summary: A bit of slower one but you can't have Dr Aphra being blown up in every episode and expect it to keep going for very long.

Dr Aphra and her offsider barely escape being killed by an attack by the Unbroken Clan and travel to the planet to retrieve the supposedly advanced hyperdrive only to find the person behind the demonstration is going to flee the planet and the device will explode if it is used. Just as they are confronted by the big wig just as the place is attacked by someone who also wants the advanced hyperdrive.

There is a side plot of Lady Domina Tagge explaining how her family got into supplying the Empire with weapons and technology and another one of her contractors in a random firefight, but I am not sure where that particular part of the story fits with the rest of it.

After all the action of the previous story this is another one where it is more background information that drives the story forward rather than being on the go as much. I am still surprised that Dr Aphra can get anyone to go along in her schemes at all by this point as even Darth Vader has thrown her into space at least once by this point.

I would recommend this one if you are a fan of this character or want a story about a character who is not one of the main ones from the rest of the Star Wars story. There is a big event soon that will draw all the story threads into the main Star Wars story again that involves Han Solo, but I will see how it goes.