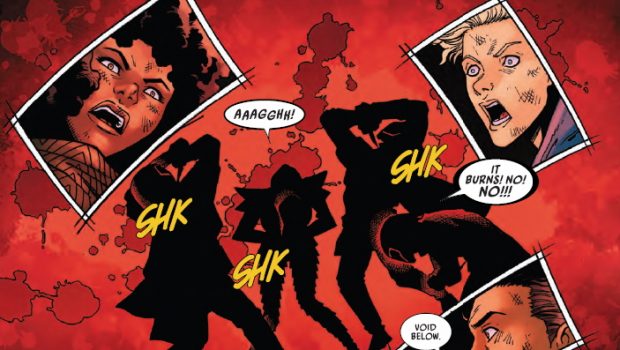 Summary: Finally the end of the War of the Bounty Hunters storyline for this series and sets up some interesting things going forward. Well worth a look.

Still in the middle of a firefight with the Crimson Dawn’s assassins, Aphra is forced to do something rash in activating an ancient artifact to deal with the attackers. This works for now, but may come back to cause her problems in the future. In a rare show of restraint she only disables the ship of the other two and doesn’t kill them.

The series is finally finished the War of the Bounty Hunters storyline just in time to go into the Crimson Dawn story. There are things revealed in this story that are going to be important going forward but I am glad this story is still going forward on its own.

I still don’t know why people would trust Aphra at all as she tends to turn on people out of spite and it would have to be a big pay off to keep working with her.

The part about the ancient civilisation artifact having unlimited power is only touched on, but is sure to come back in the future as even using it for less than a minute nearly kills Aphra.

I would recommend this one if you are still following this character and it also it has some interesting developments in it for the ongoing story.