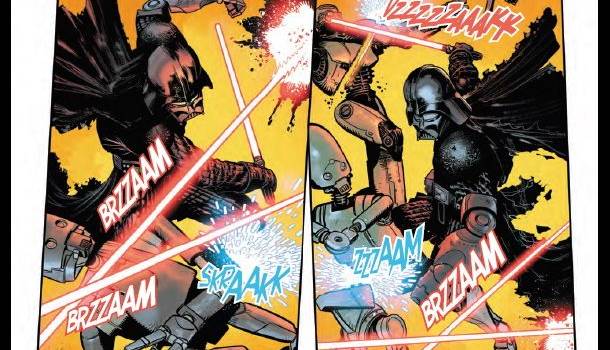 Summary: This could have ended easily a few issues ago but if you are still on board at this sage why not go all the way through?

Darth Vader is in the midst of a fight with a Sith assassin and his mercenary robots and what you expect to happen does but the robots are not that happy about it. More of the sequel trilogy gets shoehorned into the original trilogy timeline as usual.

While the survival of the main character is never in doubt in these stories given the place of this series in the Star Wars continuity, it is the thrill of getting to see the further adventures of someone you never usually get to see going off on their own adventures that is the attraction here.

As with other stories in the Star Wars universe the robots are both not living beings and also concerned about their own safety when the story demands it. Darth Vader always knew they were scrap metal.

The end was kind of like “are we doing this again? Really?” but I suppose they have to go bigger and better to keep the story going forward.

If you are already invested in the story I would keep reading, if you are not by now you would have already left. In some ways I still think the story could have ended after the events of Naboo and still been satisfying.