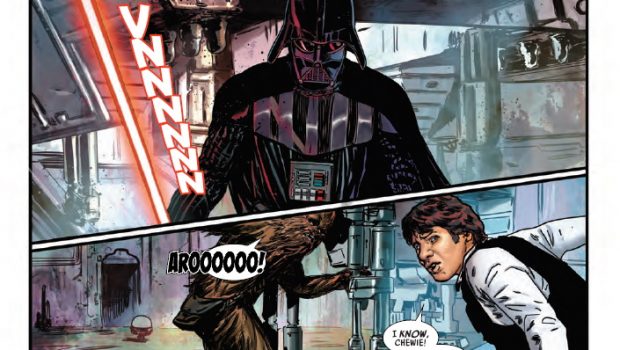 Summary: Not as bad as the last one and you get to see something you did not see before with the original trilogy, worthwhile.

After last time anything would be an improvement, but let’s not get into that now. Darth Vader proves how stubborn he is by refusing anaesthetic when he is getting operated on and when he passes out from the pain he remembers the first time he came across Han Solo.

Feels like a bit of a stretch still for this to be shoehorned into the original trilogy, but if it is part of the War of the Bounty Hunters I would like to see how it goes.

Oochi the Sith Assassin managed to survive somehow and is helping Vader on his new mission, the Emperor does not care as much that Vader will him now as a lot of people want to do that he says.

Was a lot of interesting art in this one and moments from the original trilogy that makes this one a lot more worthwhile. Also getting to see a who bunch of the same ship as the Millennium Falcon was pretty great as Han Solo is hiding out on Corellia at that point in the story.

While not a must-read, this is still good back story for the characters and a good lead up to the events of the War of the Bounty Hunters.