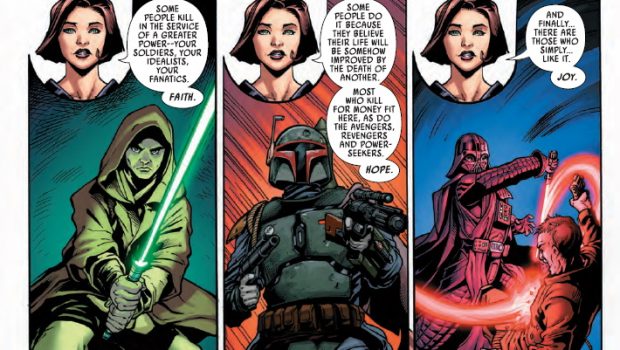 Summary: This was a surprise in a good way. Actually got me to care about this series.

No word of a lie I was not really looking forward to this series after War of the Bounty Hunters kind of turned out meh due to all the different titles you had to keep track of to get the entire storyline (some of the one-shots were decent).

This one does go into more of the story of Ochi of Bestoon and Deathstick as they are each sent off by QI’RA on a do or die mission that must not fail and we get to find out more about them and what motivates the characters as the leader of Crimson Dawn knows how to use them to her advantage.

With the recent events of the Book of Boba Fett it is a bit of a kick the pants to start paying a bit more attention to some of the “side” stories as it seems all the cards are now in play as to who could turn up in a live action adaptation  as long as it is Disney Canon and relevant to the story they could pull anything out of the hat.

I won’t spoil this one but Ochi’s mission is spectacular and definitely has him as a marked man after he does it. QI’RA knows how to use his own fear against him in this case and he would do anything for her.

This series is running towards another crossover event but is still pretty early in this series so there is still plenty of time to get on board without missing anything. Worth having a look at if you want to see more of the Crimson Dawn.