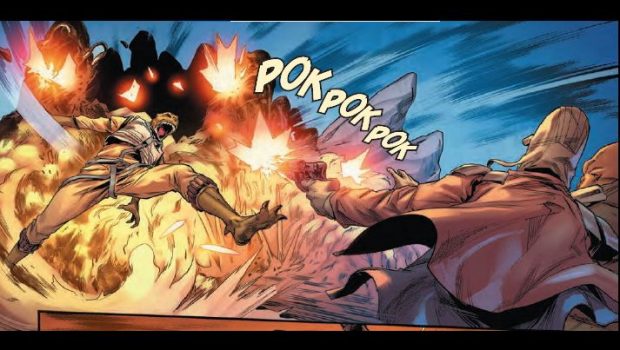 Summary: Bossk finally gets his time to shine. Also brings the "we don't need that scum" line from Empire Strikes Back into context if the bounty hunters have been fighting each other this entire time.

Bounty hunter Bossk awakens to find he is part of the Great Hunt of Malastare. “Some of you may survive” is all he can say to the other people who are targeted as prey. Vallance is not really in this one but things are leading towards the Hunt for Solo event that will bring things into the Empire Strikes Back time period.

This series also puts the “we don’t need that scum” scene in Empire Strikes Back into context as if they have been fighting each other for whoever long the events of this series are going on not even the Empire can ignore it by now. Bounty hunters seem to be given all the worst jobs that not even the “bad guys” want to waste their resources on and the Emperor does not care about the people under his command at all. This also explains the lack of safety rails or any emergency procedures that would stop something, say like a giant reactor that powers a moon-sized battle station exploding.

Bossk finally getting his own story is great as he only turns up in the one scene of Empire Strikes Back and nothing much else is known about him. He is not able to use normal humanoid weapons due to his claws and prefers to use hand to hand combat. It does really seem like he would be a formbidable opponent to Vallance and Boba Fett.

A lot of excellent action, explosions and death and just what this series needed for a refresher before it goes onto a new part of the story.

This would be a good one to have a look at even if you have not been following the series as it is its own story and you don’t really need to know what happened before.