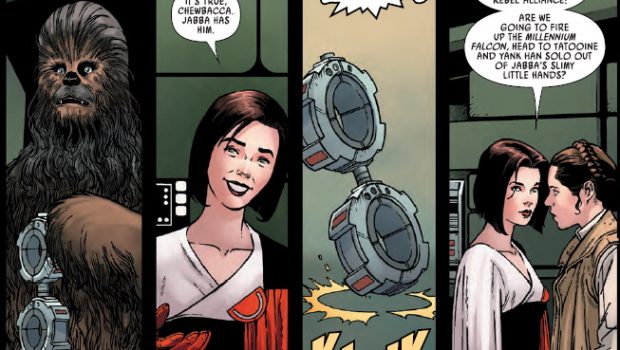 Summary: If you are reading this all the action happened in the last issue, this one is a bit more restrained. Worth it for more the character backstory.

Thinking that Han Solo perished when the Imperial cruiser they were on had a hole blew in and his body went out into space, the gang tries to come to terms with their loss. Things get even worse when the Crimson Dawn flagship appears out of nowhere and disables their controls. Instead of attacking them the leader of the organisation wants to have a woman to woman conversation with Leia.

This is another entry in this series where something big has happened in the story just before. While it is best if you have seen it before you can still follow the story in this case. It is more use for backstory for the characters as the head of the Crimson Dawn explains her history with Han Solo and Lando even gets some alone time with Lobot.

Chewbacca does get to hug Leia and is not set on fire in this one at least. He does say a lot even without having to say anything.

If you are into more action in a story then I would probably skip this one, but if you want to learn more about the characters in this series then pick it up.