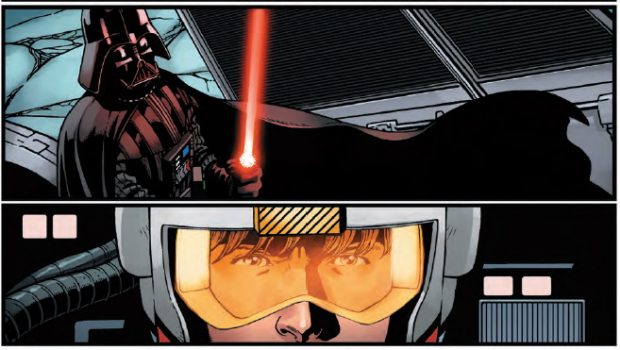 Summary: More Vader vs Luke bleh. Lando gets his time to shine in this one.

The tiresome Vader chasing Luke around all over continues with the more interesting part of this story being Lando volunteering to crawl into the Millennium Falcon innards to fix some wiring and getting to have a one of one with Elthree, the Falcon’s navigation computer who can no longer speak normally but still communicates in their own way.

Lobot is still being the cool dude and helping out with the ships. I mentioned Lobot’s part in this series to some fans of Star Wars and they were very interested as you don’t really hear that much about him in the movies.

Another entry where it does not seem like that much happens, but it does have a lot of character development and lead into Jedi. Makes more sense why Lando was trusted by Han to fly the ship at the end of that movie since he had spent all this time trying to get him back off Boba Fett/the Empire and Jabba the Hutt.

By no means a necessary purchase but if you are a fan of Star Wars and like the old school type of story and detail on some characters you know from the films I would recommend it.