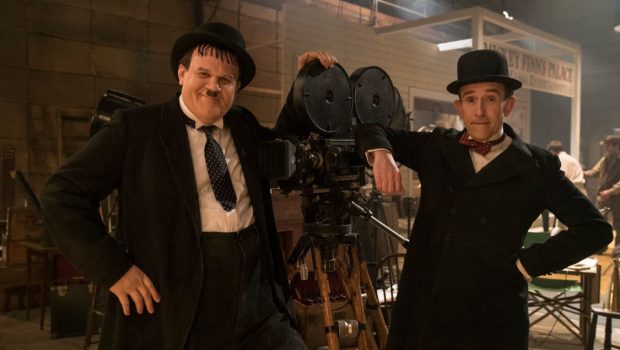 Stan & Ollie is a lightweight, fun and enjoyable tribute to the famous comedy duo of classic Hollywood comedy, Laurel and Hardy. Their biopic is courtesy of director Jon S. Baird whose previous work has mostly been in television. He directed an episode of the short‑lived Martin Scorsese HBO series Vinyl. One of the major feature films he shot was the bizarre psychedelic cop comedy, Filth (2013), which starred James McAvoy.

Baird has made two smart decisions with this biopic. The first is hiring screenwriter Jeff Pope (Philomena, 2013) to script the film, and the other is casting quality comedic actors, Steve Coogan and John C. Reilly, as Stan Laurel and Ollie Hardy, respectively. The film inspires big laughs and is a well-acted dramatisation of the feud that threatened the loyalty and the platonic love shared between the men. While it wisely deters from the chronological trappings of many biopics, the meagre scale limits the memorability of proceedings but not its enjoyment.

The film opens inside a Hollywood movie set. In one continuous tracking shot, we follow behind Stan and Ollie as they walk across various stages. In this handsome sequence, Baird’s resistance to cut represents the strength of the bond and the admiration the duo has for one another. However, their friendship is quickly tested by a studio boss, Hal Roach (Danny Huston). He threatens to break up their partnership. Despite the warning, Stan is confident they will remain inseparable. The loyalty of the slapstick partnership is further tested when Ollie agrees to partake in a film with a different actor.

The story forwards sixteen years. Stan and Ollie are still performing the same aging gags on stage together during a tour of England. Stan believes that the publicity of the tour will ensure that they will both feature in a Robin Hood movie. However, the film seems increasingly unlikely because Stan’s contacts refuse to meet with him and commit to financing the project. He refuses to disclose the situation’s tepidness to Ollie or their wives. 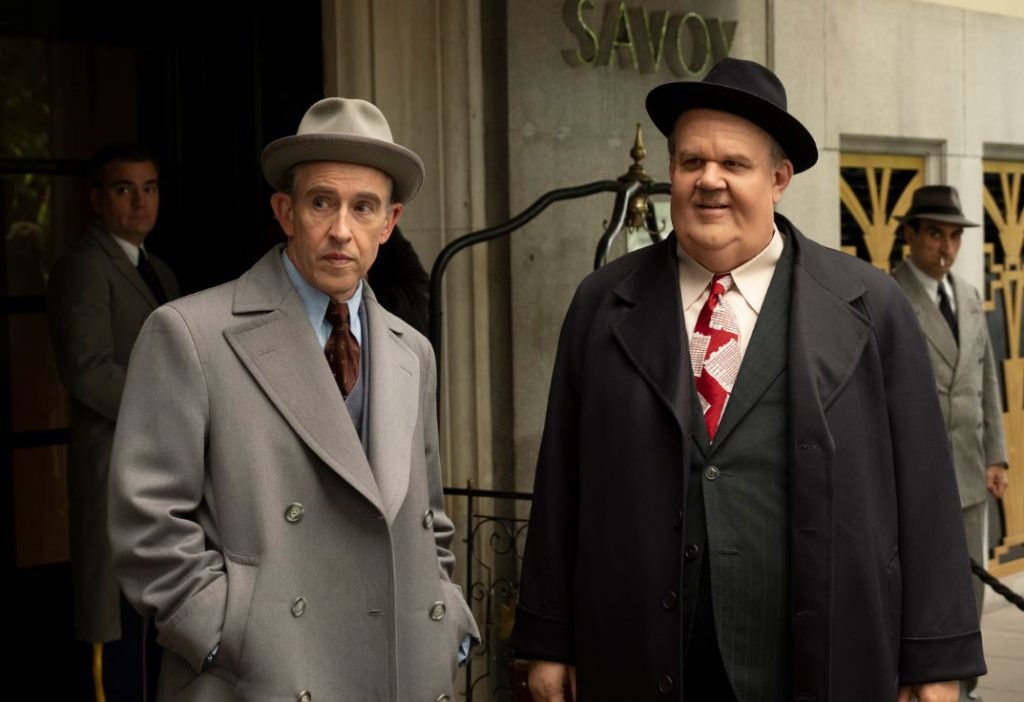 There is no love shared between the two women. When Ollie’s wife, Lucille (Shirley Henderson), is not exchanging barbs with Ida Kitaeva Laurel (Nina Arianda), she is sceptical of Stan’s plan. Ida is a Russian actress who constantly reminds people that she was in a movie with Preston Sturges. Meanwhile, the duration of the tour places a terrible strain on Ollie’s health. He is already overweight and struggling to persist with the gags and the dance routines.

The film’s most enjoyable facet is the comic timing provided by the lead actors. John C. Reilly and Steve Coogan have excellent comedic and dramatic chemistry. While the slapstick comedy they undertake is old fashioned, it never feels dated. This is evident from the big laughs their stage work elicits. The gags are effective and never crass. One of the simplest involves Ollie tugging Stan back by his collar so he can walk on stage first. The best skit involves the pair missing one another as they enter and exit opposing doors. The timing and physicality of the gag is sharply realised. 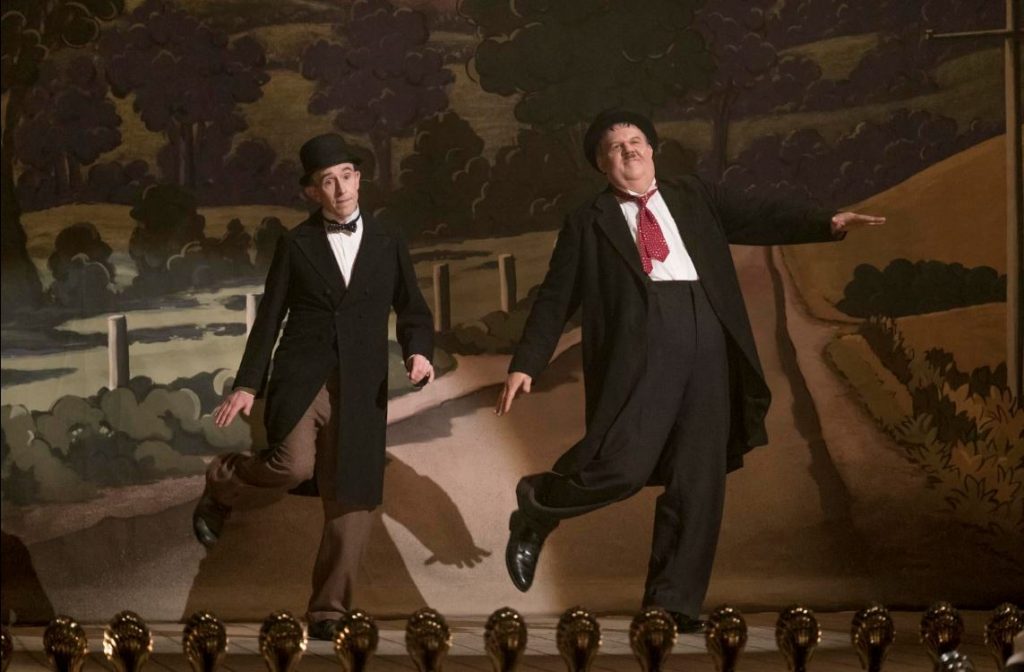 There is also a joke that unexpectedly blurs fiction and reality. The duo are hurriedly approaching a train but then accidentally drop a large, heavy trunk down a flight of stairs. Later, an old man at a party says he loved the gag he saw where they dropped a piano down some stairs. Humorously, their real lives have become inseparable from their jokes.

The biggest departure from the film’s comedic overtones is a colossal fallout shared publicly between the men. The argument is acted at such a note-perfect pitch by both actors, while Jeff Pope’s dialogue is appropriately bitter and acidic in tone. The actors tear into each other and air their grievances without winking at the camera. The scene proves they are as adapt at dramatic acting as they are with clever gags. 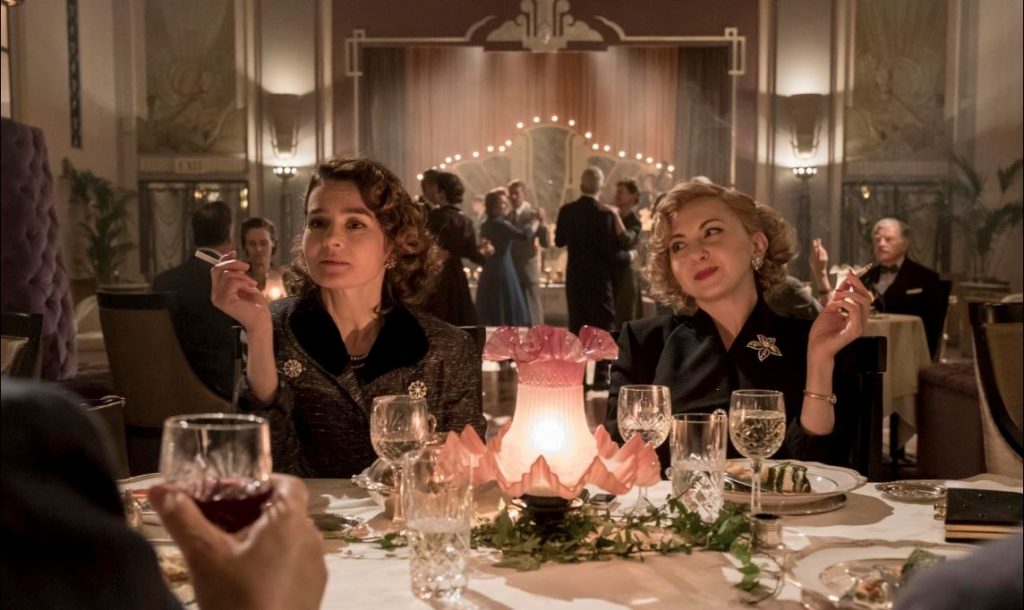 The hulking physicality of Ollie is also critical in infusing the story with dramatic tension. The suitably awkward movements of John C. Reilly add to Ollie’s demise. At one crucial moment he is sweating and can barely finish an important routine on stage because of his heart. The tension grows from the uncertainty of whether he will finish before doing further damage to himself. However, since this is a platonic love story, where two men can comfortably lie in the same bed and touch hands, the show must go on.

The gags are enjoyable and both actors embody the dramatic and comedic demands of their parts. The humour makes the film relaxing and fun to watch, particularly the scene where they are performing on stage. It is also appreciable that it avoids the linear chronology of generic biopics. Although the small scale of the story and the briskness of the resolution, post-fallout, makes the film palatable but slight.

Summary: The film's most enjoyable facet is the comic timing provided by the lead actors. John C. Reilly and Steve Coogan have excellent comedic and dramatic chemistry.