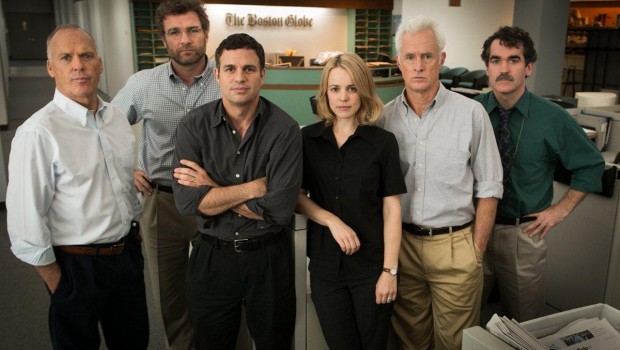 Even the most grounded films based on real events undergo some form of embellishment. Whether it be focusing on the emotional element, streamlining facts, or being spiced up with film techniques, compromises on reality must be made to appease audiences during the transition to the silver screen. Spotlight is refreshing because it indulges in embellishment as little as possible while still telling the human driven side of its’ subject matter: the Boston Globe journalists uncovering systematic child molestation by Catholic priests. The film follows the newspaper’s ‘Spotlight Team’ of investigative journalists in 2001 and early 2002 as they piece together the facts of this true story.

Michael Keaton plays Walter Robinson, the veteran journalist and head of the Spotlight Team. Mark Ruffalo and Rachel McAdams are Mike Rezendes and Sacha Pfeiffer,  two of the Spotlight Team’s reporters who delve into the depths of the incident, pursuing the trail of victims and offending priests. The Boston Globe’s new editor Marty Baron, who prompts the follow up into the story, is played by Liev Schreiber. The portrayal of investigative journalism feels realistic; the devil is in the details as the team searches for both the evidence and correct manner to expose the case. The arduous path is littered with cover-ups, legal-tape, intrigue, and the indifference of the numerous “good-Germans” who know of but do not confront the atrocities afoot to maintain status-quo.

No single character is solely given the spotlight, which works to the film’s benefit as the story is given full priority; no time feels wasted in becoming bogged down in their personal lives and Spotlight’s excellent pacing uses every minute to the full extent. All performances are excellent and believable, from the journalists and other major players, such as Stanley Tucci who plays attorney Mitchell Garabedian who is representative of several victims and pursuing legally sealed documents, and down to bit parts in the form of creepily performed, blasé ex-priest offenders and shattered victims.

Letting the story take the spotlight is also prevalent in the films overall presentation. The score is understated and the camerawork is similarly pragmatic. Again, this benefits Spotlight because fancy trickery needn’t be included to elevate the film or to glorify and demonise its’ subjects. The story presented in it’s raw format is more than sufficient and wholly captivating throughout with seldom a dry or dull moment. However, a nice extra touch is the strategic inclusion, sometimes subtle sometimes not, of churches in exterior shots. The sound of bells are a constant reminder of the scope and gravity held by the story Spotlight has to tell. 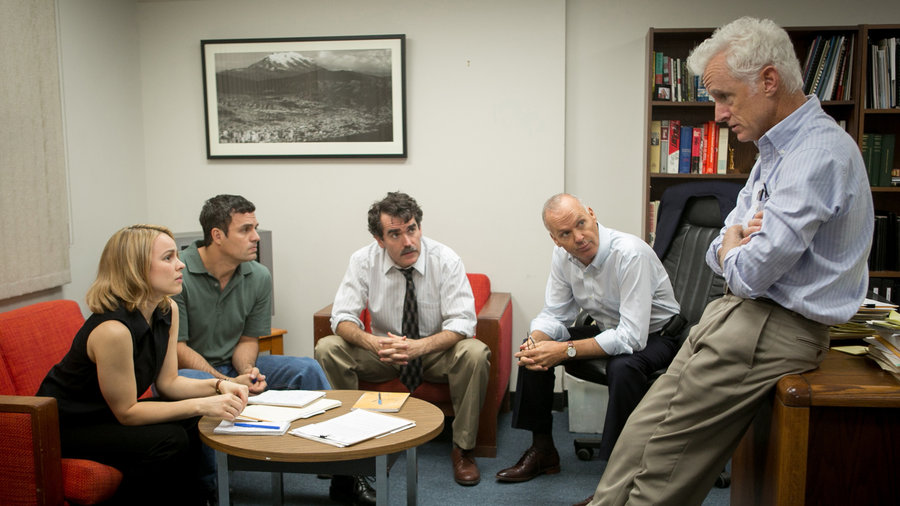 Spotlight marks a return to form for director Tom McCarthy after The Cobbler (2014), starring Adam Sandler. McCarthy  is also the writer alongside Josh Singer, who wrote episodes of The West Wing and the Wikileaks thriller The Fifth Estate (2013). Spotlight is triumphant for its’ raw and uncompromising approach, which is executed in a near-flawless manner. The investigative procedure is handled with such attention befitting the earth-shattering, Pulitzer prize winning story it covers. The findings presented in Spotlight paved the way to shed light on innumerable similar cases worldwide, with the aftershocks still occurring to this day, including here in Australia. The film closes with a list of such locations and it was particularly chilling to see my home city of Wollongong among them.

Summary: A grounded and uncompromising feature that illuminates one of the biggest stories in recent history. Investigative journalism that hits all the targets it aims for.