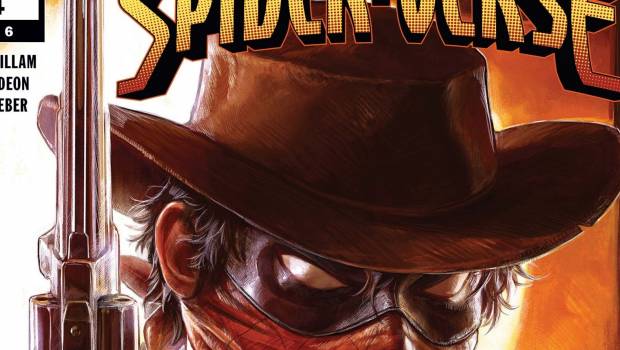 Hot on the heels of the Into the Spiderverse movie, Miles Morales returns in a Quantum Leap style adventure where he leaps between universes to help different versions of the Spiderman on each Earth.

Webslinger is the Spiderman in this adventure with his horse Widow who shares his powers. He has six shooter webslingers rather than body mounted ones and they do run out of web bullets at times.

The horse being able to run up the side of buildings is teased at but we never get to see it.

This is a great setting for this type of superhero story with the Old West being a very familiar backdrop to many old movies and TV shows, having now been around for longer than the period of history it is based on.

The mark of a good crossover story is that the character it introduces could continue for their own adventures and this has that. I want to see more of this character in the future.

Some of the things were funny such as Miles understanding Spanish and the Webslinger not and having the “on the ocean”  problem of people not understand his cultural reference points.

I would recommend this one if you want a different take on the Spiderman story and want to see more of the Into the Spiderverse storyline following up from the movie.