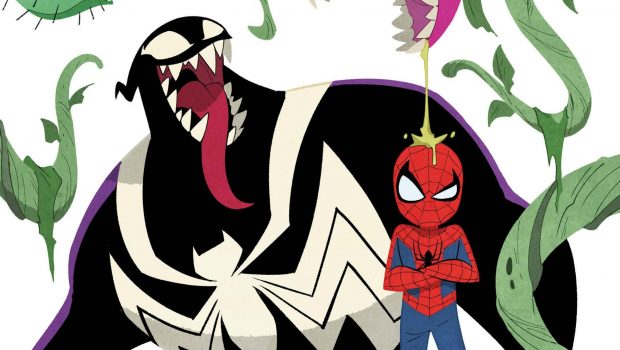 Summary: The Odd Couple via Spiderman and Venom and all the wacky hijinks that ensue.

For some reason that is not explained Spiderman and Venom are now housemates. One morning Spiderman wakes up to find he is in Venom’s body as he needed to “borrow it” for something. This causes no end of trouble for Spiderman as he can’t unlock his phone and then Venom’s enemies come knocking with pumpkin bombs.

A fun little story and one time you can judge a book by its’ cover as if you saw this title on the shelf you would at least pick it up to check it out. Great art style and fun character designs that are just cute enough to be endearing but not enough to look out of place. At first I almost thought it was going to be a Spider Ham story as Spiderman looks so short on the cover.

Spider Gwen also makes an appearance but I am not too sure her role in the overall story. I would like to see more of that character after seeing Into the Spiderverse.

As for the story I would not think Spiderman would be allowed on competitive game shows involving athletic events unless it was for a publicity stunt. In Spiderman Homecoming the movie the henchmen for the Vulture joke about the Avengers costing too much to deal with low-level crime. The famous Superman vs. Muhammad Ali comic also comes to mind

The plot device of the body swap reminds me of the one story from Red Dwarf but I am sure it has been used a lot in comics. Venom is greedy and vain and would use anything if it was for his own advantage.

I would recommend this release if you are a fan of either character and would like to see them in something a bit different.