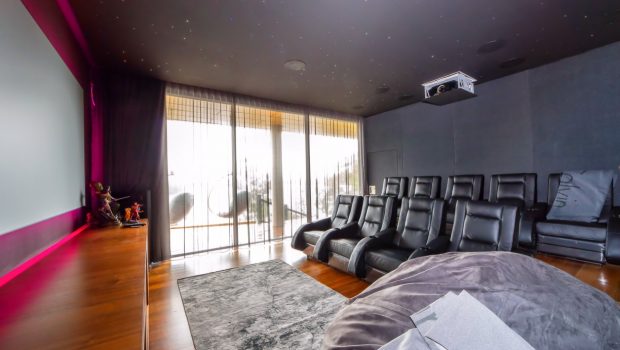 Sony Australia Professional Solutions Business Development Manager Michael Bromley explained, “2019 is the 46th year Sony has been making home cinema projectors. We started back in 1973 and our first 4K projector hit the Australian market in 2011. We have been at the forefront of many of the developments in the industry during that time including laser, 4K, HDR, and 4K HDR laser short throw projectors to name a few. It’s this heritage, innovation, performance and quality we wanted to celebrate through this award.”

Bromley continued, “We have very loyal, professional and passionate partners and we believe these awards are a way for them to be recognised and rewarded not only by Sony, but also by their peers for the incredible work they do.”The 4K Home Cinema Projector Master Installation Awards go to the best and most creative spaces in the industry that use Sony high performance projectors, with this year’s winners receiving an award plaque and a unique Sony LSPX-S2 Glass Sound Speaker prize.

The awards were open to all dealers who installed a Sony SXRD 4K home cinema projector into a project over the last 12 months with special consideration given to those unique entries that overcame specific issues or challenges including the use of ultra-short throw technology, large lens shift and lighting considerations.

Bromley added, “We were overwhelmed by the response and number of entries across ANZ. Home Cinema is clearly evolving. We are now seeing less traditional dark theatre rooms and more multi-purpose spaces, like a lounge or a rumpus room, where clients want the big screen cinema experience in a non-traditional space. The mixture of entries and how projectors were installed into these spaces reflected this. The five finalists really tapped into their client’s briefs and delivered immersive big screen experiences using Sony SXRD 4K projectors in unique ways, without compromising image performance.”

Of the five winners, the judges highlighted that Soundline Audio – Christchurch, NZ (using the Sony VPL-VZ1000ES ultra short throw, SXRD 4K laser projector) team used space hidden in custom designed and built cabinetry with a motorised screen in a small living space to enable the room to quickly go from a relaxing lounge to showing 4K HDR movies in seconds making it both creative and beautifully delivered.

WaveTrain Cinemas – Wonderwall (using the Sony VPL-VW870ES) were commended for delivering a unique, immersive and luxurious space for a true 4K cinema projection experience creating a one of a kind design and installation.

Len Wallis’ Coastal Cinema (using the VPL-VW760ES) was described as “all class”. A more traditional theatre than some of the other winners, but a beautifully executed room that is amazing to experience.

The judges thought that the Lifestyle Store – Seaforth project (using the VPL-VW550ES) really tapped into the type of modern spaces projection can work in. A bright, open and modern space that really needed a big screen experience for fun family time on the couch.

Then the Lifestyle Store – Kangaroo Point project (VPL-VW550ES) created a real hybrid space, with all the trimmings of a dedicated theatre and the flexibility to be a more open and inviting communal space.

Michael Bromley concluded, “The awards were launched to recognise our dealers and the truly inspiring work they do. Sony’s 4K, laser and HDR technology gives our dealers the creative licence to design unique large screen experiences for their clients, no matter how big or small their space, without compromising the visual performance. In years to come the Sony 4K Home Cinema Projector Master Installation Awards will not only provide ongoing recognition of excellence in the industry, but a real barometer of the direction of the home cinema industry in Australia and New Zealand.”