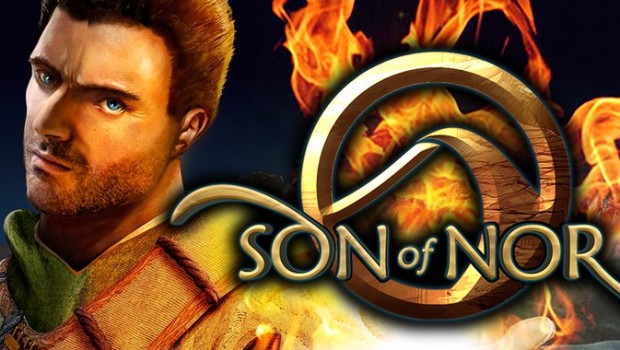 Son of Nor PC Review

Summary: Son of Nor gives the player a chance to play with some cool magic.

Steam Greenlight is full of a mix of games waiting, some hitting crowd funding and even seeing the light of our computer screens. It’s a Wild West mix of ideas and styles that reminds me very much of the days when pen and paper gaming ruled and there where so many exciting styles and ideas to choose from to meet just about anyone’s gaming tastes.

Son of Nor is one such game. It’s not a top “triple A” title with gobs of money to put forth towards its production, but what it lacks in polish it makes up for in a simple straight forward adventure and magical abilities. Simple is good at times, but not for a story such as this. It has some hits and misses, and the cross stitch of events don’t always seem to mesh very well with the story or game as a whole. But don’t let that stop you from experiencing something new, something different with a lot of heart and soul.

To begin with, we see that the world is divided between humanoids and lizard people, the lizards ended up with magical abilities first and thus enslaved the humanoids. Eventually humans get the magical abilities as well, rebel and lead the last of the humanoids to a refuge on this desert world of Noshrac. The refuge is known as The Edge. 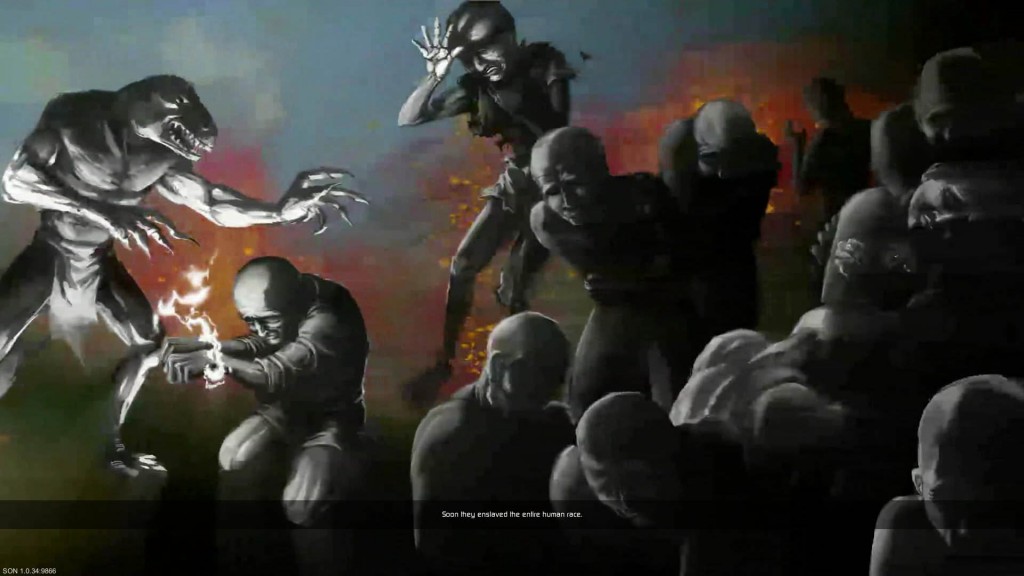 After hundreds of years of piece, the Lizard race is at it again and this is what launches the player’s character into action and the adventure. Odd that the games title is “Son of Nor” when in the initial character screen the character can be male or female.

Creating a character at the beginning has simplistic things you can do, such as change the characters mode of outfit, male or female, and some of the colors of the outfit amongst other things. You name your character and then off you go on the adventure.

To begin with the character already has some abilities that come in handy. There is a form of telekinesis that enables you to pick up certain objects and hurl them at enemy.  There is also assort of terraforming ability that allows you to raise or lower the sands around you on this world.

Not only is having power over the sand good for raising yourself up to higher elevations, but you can cover some obstacles and you can also use the sands as a shield, or lower them to find other things that may be buried. 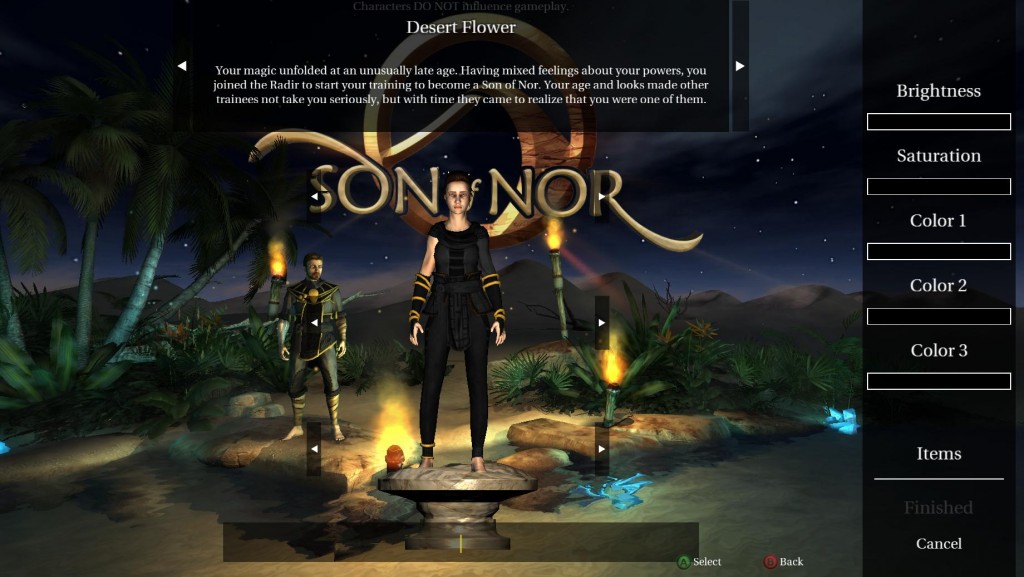 Battles are sometimes surprisingly frantic as the enemy rush you with sword or shoot at you with arrows. Using your abilities to counter and in turn attack, grabbing an enemy with your mind powers and lifting them and hurling them at another foe is lots of fun too.  Players should not get too used to fighting only lizard men. There are a few more surprises throughout the game. Who does not love giant scorpions?

Throughout the adventure new areas are discovered, such as underground areas, and lost temples. Puzzles to work through and traps to get past with the help of your abilities, and some jumping and some platforming here and there for good measure.

As you progress new Elemental magical abilities are made available. Wind, fire and essence magic. Once more magic’s are learned they can be combined to throw the beat down into enemies. 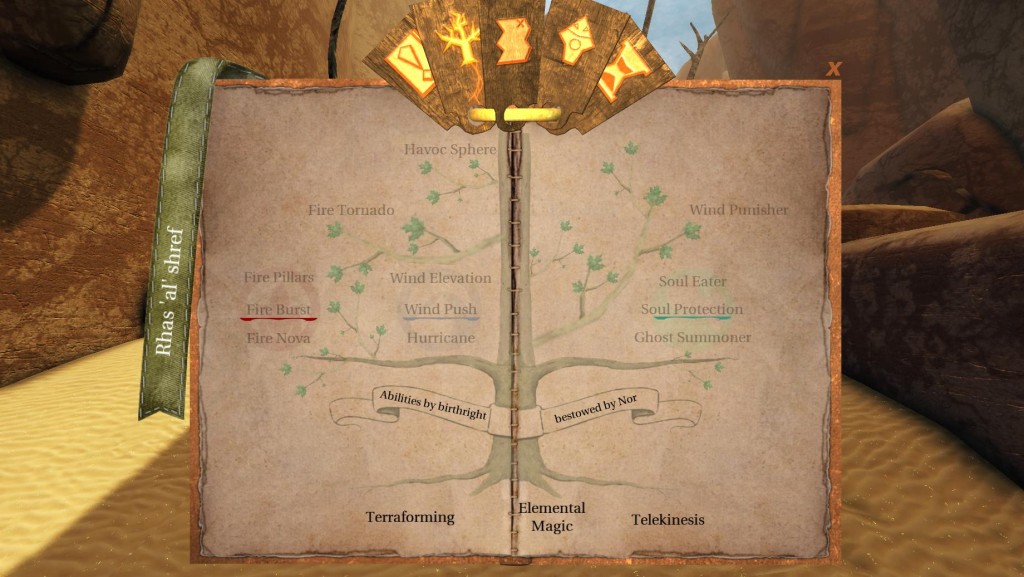 Accessing the magic information and the map and log of the events is done by opening a tome/book on screen. It’s aesthetically pleasing and well utilized in the game. Though game time does not come to a stop when you open it, so opening it during combat has to be done very fast and closed again…because it covers the screen and the action.

It’s not all enemies, there are characters and NPC’s that assist you on the adventure…There are other characters that you have limited interaction with….most of the scripted encounters play and the characters give you further information to move the story along…but in game itself, there is no major interactions to be had. Most of the chunks are the standard cut scenes. Remarks are kind of thrown out there ham-handedly at times about a story point and there is no real build up to a reveal about the person or event to make us as a player care that they betrayed our people….. 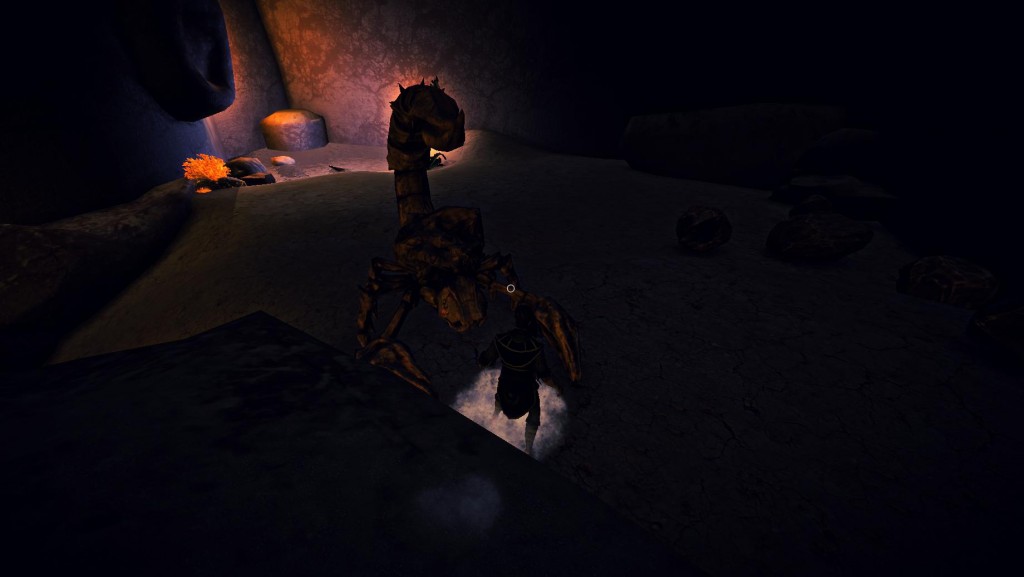 Most of the times you never know much about who it is your talking to or the significance…if any… to the adventure at hand. We just assume since you have been raised here in the compound with them, you have to know them. At one point after the opening play takes place someone wonders out loud where a certain character is as everything was going on… we do soon find out… but since there was no build up and we never knew anything about the character…the reveal gave us as a player, no pay off of surprise, there was no impact what so ever. 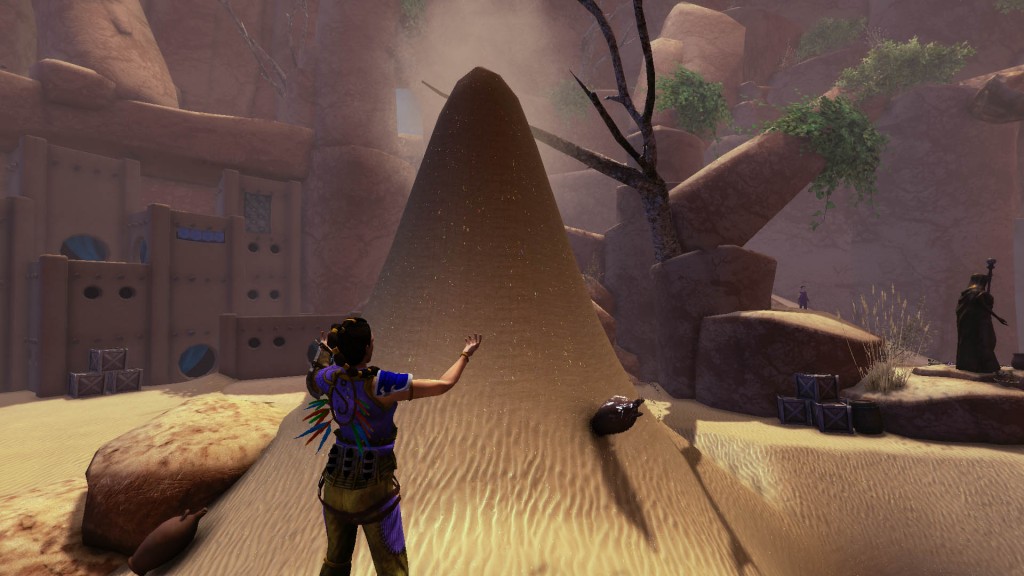 While it could do with more polish, this game not being from a big company, the effort is there, and we expect bigger advances from them in the future. They have a foot in the door and they are on the right track. Now they just have to make the next one even better. Because in the industry, you’re only remembered from the last title you put out.

Son of Nor has some promise, delivers a passable game… but can be so much better. If you come into this knowing you’re playing what can be considered an Indy title you won’t be let down as much. There are some good things going on, and it may hold your interest a bit… if nothing else than for the interesting abilities that are bestowed on the playable character.