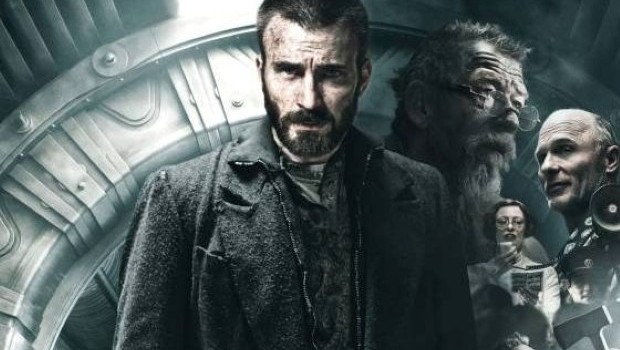 Summary: A comment on social structures and class warfare disguised as a sci-fi film, Snowpiercer is thoughtful and expertly shot.

Inexplicably given an extremely limited release in both the U.S and over here in Australia, South Korean director Bong Joon-Ho’s (The Host) adaptation of the 1982 French graphic novel Transperceneige is an accomplished foray into sci-fi as social commentary. 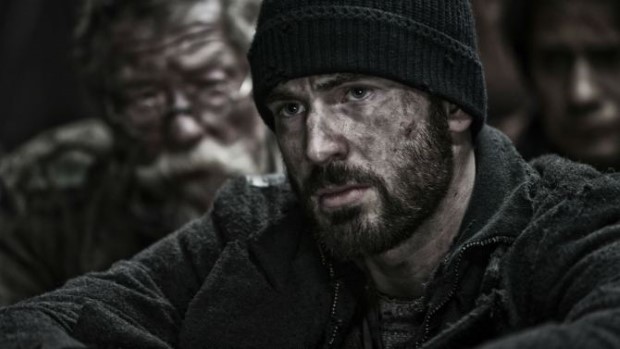 The central conceit of the film centres on the passengers aboard the titular vehicle, a massive train that serves as humanity’s only refuge after a failed attempt to reverse global warming plunged the planet into a second ice age seventeen years earlier.

The high tech vehicle is fully equipped to run endlessly on an annual loop around the earth and offers the survivors sanctuary from the harsh, unforgiving environment outside, but there is some dissent amongst some of the passengers as the train is segregated by class, with the affluent living a life of luxury at the front of the train and those deemed as lower class forced to live a miserable existence in the tail section, oppressed under the totalitarian regime enforced by Mason (Tilda Swinton), the Thatcher-esque right hand woman of the train’s reclusive inventor, Wilford (Ed Harris). 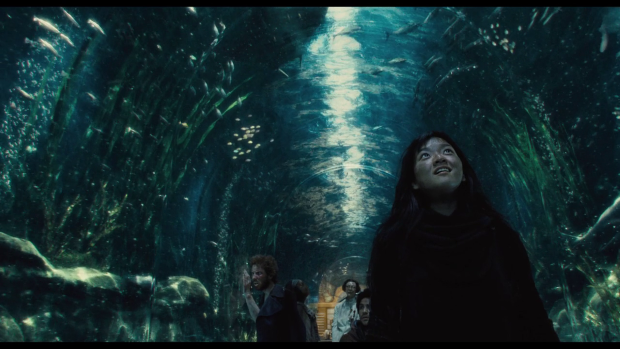 Forced to subsist on a diet of dubious looking gelatinous blocks (Some containing hidden messages from an unknown source) and to bend to the whims of the upper class, the passengers in the rear of the train stage a long planned revolt after two children are taken to the front of the train for unclear reasons. Led by Curtis Everett (Chris Evans) and the frail Gilliam (John Hurt), the rear passengers attempt to make their way to the front carriages with the intention of seizing control of the engine. With the assistance of a drug addled former engineer and his female companion, the group incrementally take control of portions of the train but neither Mason or Wilford are willing to give up their positions of power without a long and bloody fight.

To reveal any more of the plot will be doing viewers a great disservice – It’s best to go into Snowpiercer knowing as little as possible, as the film’s plot takes a few unexpected twists and turns along the way. 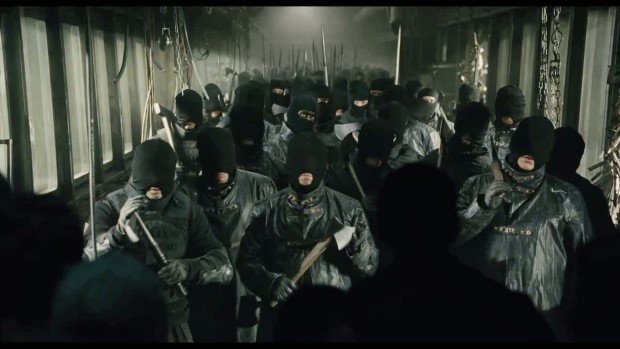 The cast is absolutely superb, with Evan’s displaying a gravitas that may surprise viewers who have only see him play matinee idols like Captain America and the supporting cast, also featuring Octavia Spencer and Jamie Bell, serving to bolster his performance whilst crafting unique and effective performances of their own.

Every aspect of the film has been finely tuned, from the exquisite direction to the austere set designs of the rear carriages to the luxurious interiors of the front carriages and the film deftly balances astute social commentary with moments of horrific violence and a streak of absurdity that makes Snowpiercer stand out as a refreshingly unique alternative to the usual big budget blockbuster fare. 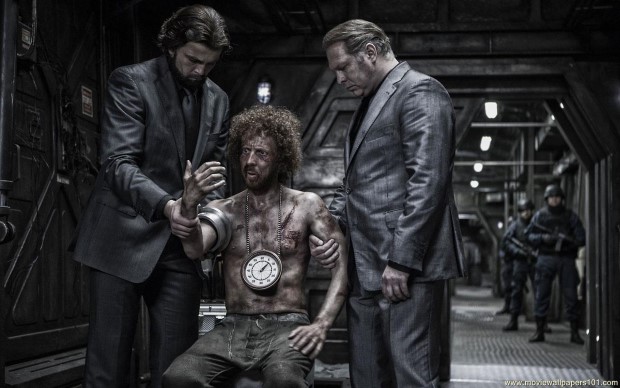 Snowpiercer, despite its intentionally dull colour palette, looks absolutely gorgeous on Blu-ray. When there are moments of colour, they’re vivid and effective when juxtaposed against the gray backdrop of the rear carriages and threaten to overwhelm the senses as our heroes make their way into the more ornate front carriages, particularly the garish classroom scene. There are a few moments where minor crushing is evident, most noticeably in the darker first third of the film, but aside from that the image is crisp and clear and free of any anomalies.

Audio wise Snowpiercer also impresses, with a robust and booming DTS-HD 5.1 lossless soundtrack that boasts finely tuned directionality and clarity. The immersion afforded by the audio track succeeds in transporting the viewer into the train and, overall, Snowpiercer has been afforded an outstanding transfer that does justice to the quality of the film itself. 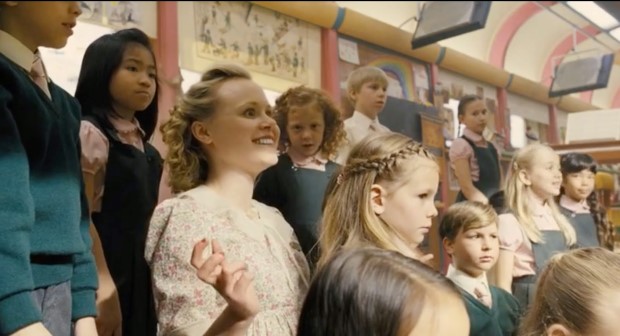 Snowpiercer has a nice selection of supplemental features that serve to shed some light on the production and the adaptation process as well as offering some insight into the events that preceded the film via an animated prologue.

Film critic Scott Weinberg hosts a commentary track where various guests call in an offer their interpretation and perspectives on the film; given the nature of the track there’s no real insight into the process of actually making the film or technical details, rather just a group of fans sharing their thoughts, so your mileage will depend on whether or not this is the kind of commentary track you’re willing to sit through. Personally, although some interesting points are raised, overall the entire affair kind of comes off like an overly long podcast.

There are also featurettes covering everything from the film’s comic book origins and its journey to the big screen to the characters that populate this dystopian fantasy, a making of looking at the production process, interviews with Evans and Swinton and a Q&A hosted by the Alamo Drafthouse where the audience travels via a specially outfitted train car resembling the one featured in the film to a screening of the film followed by a discussion with Bong Joon-Ho.

Overall, a robust package that will reward anyone looking to further immerse themselves in the world of Snowpiercer after the credits roll. 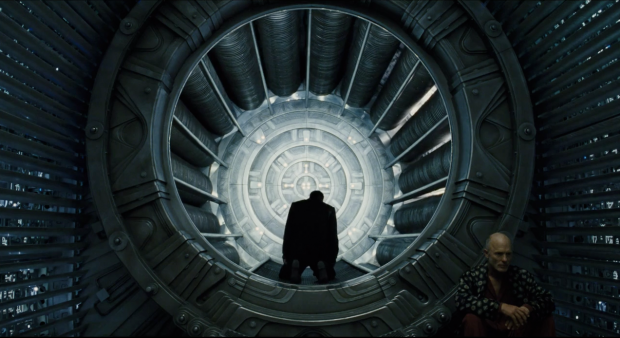 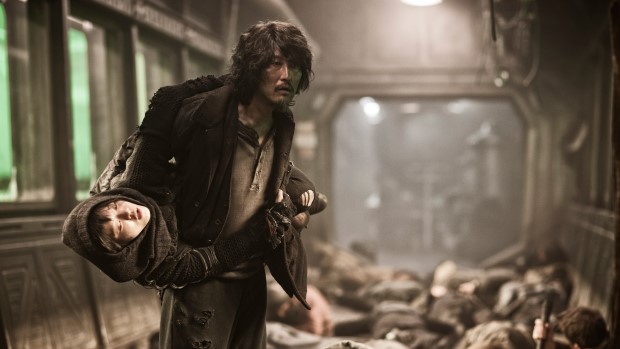 One thing viewers should know before entering the film is that it is depressingly bleak throughout and doesn’t adhere to the traditional conventions of film direction and narrative that many may be accustomed to.

There are moments where viewers may become frustrated when no explanation is offered for what is occurring onscreen, such as the final fate of one of the children from the rear carriage and the ritualistic dipping of weapons in fish blood before a major battle scene (Which I interpreted as the blood being poisonous, hence the coating of the blades), but personally I felt that these stylistic and narrative choices added to the oppressive atmosphere of the film rather than detracted from my enjoyment and, ultimately, you are left to draw your own conclusion.

A comment on social structures and class warfare disguised as a sci-fi film, Snowpiercer is a thoughtful and expertly shot meditation on the extremes people are willing to go to in order to survive. In some respects Snowpiercer reminds me of the work of Terry Gilliam, particularly 12 Monkeys and Brazil, which is praise of the highest order considering his vision of a dystopian future with blatantly absurd elements ranks up there with my all time favourites… And of course the film features an explicit nod to the director with John Hurt’s character.

If you’re expecting an ass kicking extravaganza or a straightforward narrative journey then you may be disappointed by Snowpiercer but, for me, the film stands as one of the strongest offerings of the year and I have no qualms about recommending it wholeheartedly. 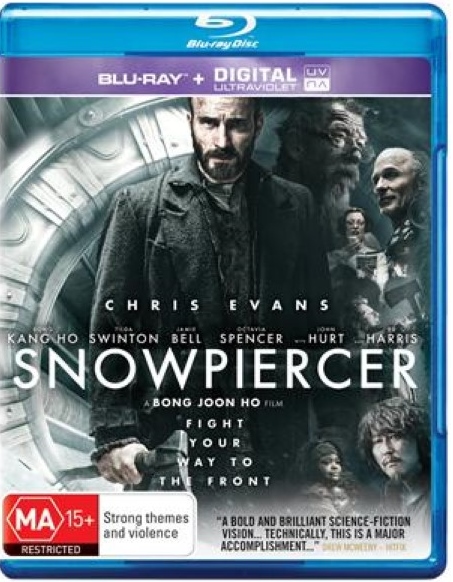