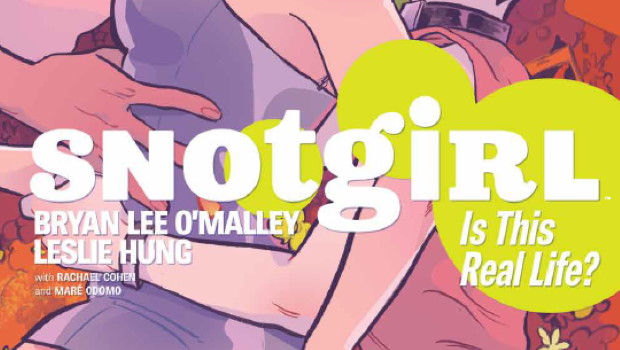 Summary: The hyper-real, real and surreal all twist and swirl together in this Snot Girl Thriller.

There’s a certain charm to Snotgirl that I can’t quite put my finger on. It might be the fact that on the one hand she is trying to present this image of a perfect beauty whose life is perfect and on the other her life is full of insecurity and drama… or it could just be that when you break through all the superficial artifice Lottie really just wants what many of us want… to find love and live “happily ever after”. This volume of Snotgirl finds Lottie wondering just how things are going with Caroline. But that’s just the start of her adventures.

I suspect there’s a fairly fine line between writing stories about “social media influencers” and having them come across as just vapid, self absorbed walking advertising and having them come across as deeper characters with flaws and frailties that make them charming in some ways. Bryan manages the latter. We have plenty of characters in these stories who are arguably quite obnoxious on some levels… they fill their lives with superficial artificiality and seem to put the cause of beauty above all else. But then we get to hear the internal monologues and we learn that they are just trying to make their way through the world as best they know how and more importantly that they are just as vulnerable as the rest of us, they just tend to hide it more often (sometimes unsuccessfully). But this Volume doesn’t just give us more of Lottie’s ups and downs, it gives us mystery, intrigue… a murder mystery? There’s actually quite a lot going on here and it’s an entertaining read.

The panels throughout this book are generally bright and full of vibrant colours, warm tones and the occasional dip into cooler tones for the more sinister elements. The overall feel of the pages when you flick through is light and fun, which is not to say the story doesn’t go dark in some places, but it is a reasonable indication of the overall feel of the book.

I’m still not entirely sure what to make of Snotgirl. I’m pretty sure I like the comic… but there’s a lot to take in when reading these comics as there are typically multiple threads all running at once and crossing over at various points. That complexity and variety with story points is probably what leaves me wanting to find out what happened next and even if the main story portions don’t grab you there’s a decent chance one of the concurrent story elements will. Worth a read if you are into a light hearted take on social media “personalities” and the difference between online personas and the real people who project those personas.