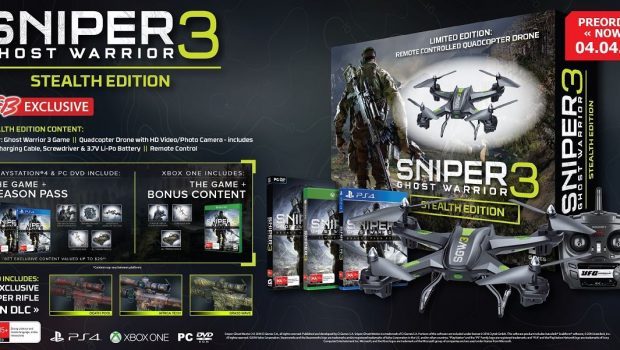 Sydney, 2nd February 2017 – Exclusive to Australia only, the Stealth Edition for Sniper Ghost Warrior 3 has now been announced. It is available to pre-order from today, and it includes a thrilling arsenal of items.

The Escape of Lydia single player campaign and Vehicle Buggy will be available at launch, with the rest of the content becoming available throughout the year.

The Sniper Ghost Warrior 3 Stealth Edition is available to pre-order at EB Games only, and will be released for PC, PlayStation®4 Computer Entertainment System, and Xbox One on April 4th, 2017. It will RRP for $169.95 on PS4 and XBO, and $159.95 on PC.

Sniper: Ghost Warrior 3 tells the story of brotherhood, faith and betrayal in the most complete sniper experience ever. Take the role of an American sniper named Jonathan North, who is dropped into enemy territory in northern Georgia, nearby Russian borders. Explore large open-world maps with dynamic weather and a day and night cycle that actually impacts play and decisions. Customize weapon equipment, accessories, vehicles and a drone, and utilize the three pillars of gameplay to your liking: Sniper, Ghost, and Warrior.