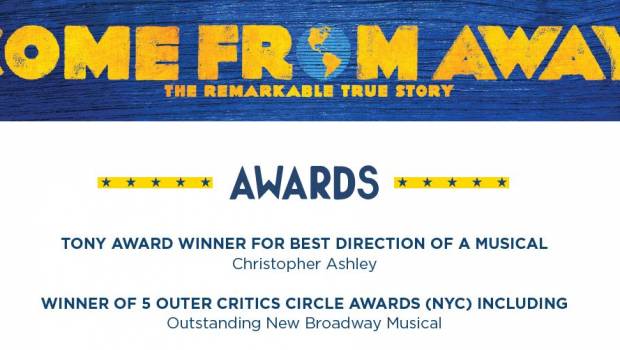 Smash Hit Broadway Success, COME FROM AWAY, Announced to Premiere in Melbourne 3

‘ONE OF THE BIGGEST HITS ON BROADWAY!

Melbourne has confirmed its status as a home for outstanding theatre, with producers Rodney Rigby and Junkyard Dog Productions today confirming that the city will host the exclusive Australian premiere of acclaimed Broadway musical COME FROM AWAY.

Set to inspire audiences at one of Australia’s pre-eminent playhouses, the Comedy Theatre, Opening on Saturday 20 July 2019, the production will benefit from a major refurbishment to the 90-year-old heritage listed venue including new chairs and improved patron amenities

COME FROM AWAY is a ground-breaking musical that tells the true story of the immediate aftermath of the terrorist attacks of September 11, 2001.  It depicts the extraordinary convergence on September 12, 2001, when 38 planes and 6,579 passengers were forced to land in Gander, Newfoundland, almost doubling the population of the remote Canadian town.

The Premier of Victoria, the Hon. Daniel Andrews, today confirmed with much excitement how COME FROM AWAY strengthens Melbourne’s position as a global leader in theatre.

“I am very excited to confirm that COME FROM AWAY is coming to Melbourne,” Premier Andrews said.

“Bringing this record-breaking production exclusively to Victoria is further proof that Melbourne really is the cultural capital of Australia and one of the world’s leading theatre cities.”

“From a packed theatre in New York to standing ovations here – I truly can’t wait to see the show playing in Melbourne.”

Sue Frost and Randy Adams said “Junkyard Dog Productions is thrilled to bring COME FROM AWAY to Melbourne next year, in partnership with Rodney Rigby and the team at Newtheatricals.  COME FROM AWAY’s universal themes of hope and humanity have captured the hearts of audiences on Broadway, across the USA and Canada and we are thrilled to now be able to share it with Australians”.

“Melbourne continues to lead the nation as its theatrical capital with the announcement of the refurbishment of the Comedy Theatre to host the Australia premiere of the Broadway musical COME FROM AWAY.  A new Broadway musical about people coming together and having compassion for people in need, regardless of religion, race, or sexual orientation” said Producer Rodney Rigby.

COME FROM AWAY tells the remarkable true story of thousands of stranded passengers and the small town in Newfoundland that welcomed them.  Cultures clashed and nerves ran high, but uneasiness turned into trust, music soared into the night, and gratitude grew into enduring friendships.

COME FROM AWAY began performances on Broadway 18 February 2017 and officially opened to critical acclaim on 12 March 2017 at the Gerald Schoenfeld Theatre, where it has since opening played to standing-room-only audiences, repeatedly smashing historic box offices records.  The New York Times theatre critic Ben Brantley wrote, “A gale of good will blows out of this smart, robust musical.  Even the most stalwart cynics may have trouble staying dry-eyed during this portrait of heroic hospitality under extraordinary pressure.”  Newsweek said “It does what all the best musicals do: takes you to a place you never want to leave.  A funny, charming and uplifting celebration.  One of the best ensemble pieces in years!”

The Tony Award-winning musical COME FROM AWAY launched a second company in Canada where it played a strictly limited four-week engagement from 4 January 2018 in Winnipeg and then moved to Toronto where it is currently playing at the Royal Alexandra Theatre.

A third company of COME FROM AWAY will launch a North American Tour across the United States and Canada at Seattle’s 5th Avenue Theatre in October 2018.

The Mark Gordon Company will produce and finance a feature film adaptation of COME FROM AWAY.  Two-time Tony Award and Grammy nominees; and Outer Critics Circle Award and Drama Desk Award winners Irene Sankoff and David Hein, who wrote the book, music and lyrics, will adapt the feature screenplay for the project and Tony Award winner Christopher Ashley will direct. MGC’s Mark Gordon will produce.

Jason Marriner, CEO of Marriner Group, said, “We couldn’t be happier that Australian audiences will not only get to experience this ground-breaking Broadway musical, but also be amongst the first to enjoy the freshly renovated Comedy Theatre.”

COME FROM AWAY is produced in Australia by Rodney Rigby and Junkyard Dog Productions.

For news and ticket sales updates waitlist now at COMEFROMAWAY.COM.AU