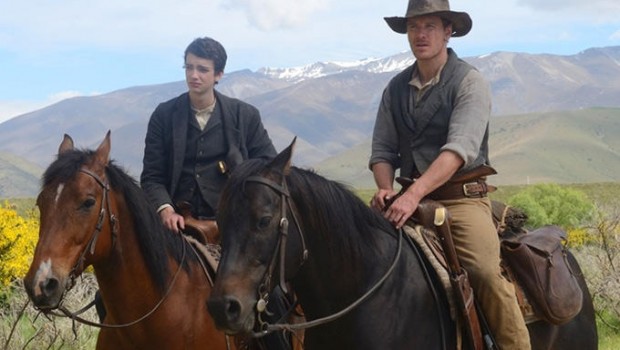 While stylistically unique in imagery and tone, the latter wavering between gritty and darkly comic, the narrative of John Maclean’s first film Slow West never entirely convinces. It is possibly due to the minor running time of barely eighty minutes long. Set in America in 1870, the film is about sixteen year old Scottish lad Jay Cavendish (Kodi Smit-McPhee), a well educated, multilingual and determined fellow who’s out of his depth in the violence of the West. While Indians are being slaughtered by Americans and their camps are being burnt to the ground, Jay searches for Rose (Caren Pistorious), the girl he loves. Rose and her father escaped Scotland after an accident involving Jay. After walking through the woods and being held at gunpoint, Jay is rescued by Silas (Michael Fassbender), an outlaw who shoots a soldier dead while still holding a cigar in the corner of his mouth. For a fee he escorts Jay across the countryside to find Rose and is surprised by the boy’s optimism. His voiceover states: “To him we were in a land of hope and good will. The way I saw it, kick over any rock and a desperado will knife you in the heart.” Their contrast in attitudes to the West reflects their life experience. Meanwhile, Silas’ former gang, led by Payne (Ben Mendelsohn), continues to stalk them.

After making a short film with Maclean, Michael Fassbender opted to star and produce this debut film to guarantee its financing and exposure. There are however noticeable problems with the context of Maclean’s script. An early twist in the piece is that Silas is using Jay to lead himself to Rose. There’s a bounty on the head of herself and her father that Jay doesn’t know about. The twist builds dramatic irony because we wonder if Jay will discover Silas’ intensions. But it’s contrived and implausible the West somehow knows about people all the way from Scotland, including having them on a wanted posted, and that Rose would be wanted dead or alive for something that wasn’t her fault. Similarly, how Silas came to discover Jay’s whereabouts is sketchy, hastily explained through the voiceover which says he’s been tracking him. The weak exposition and geography of the characters continues into the bloody finale. Rose is living with her father and an Indian in a cabin in an open field, which isn’t secluded for people in hiding. She is also more world-weary and skeptical of people than her father and a crack shot with a rifle. Even though this is a movie about adaptation, the story shapes Rose not through progression but as it pleases. Additionally, the brief flashbacks to Scotland show how Rose and Jay are from different classes of family, and how she only sees him as a brother, which is another good twist, but the brevity of these scenes suggests this was a longer film cut right down to size. 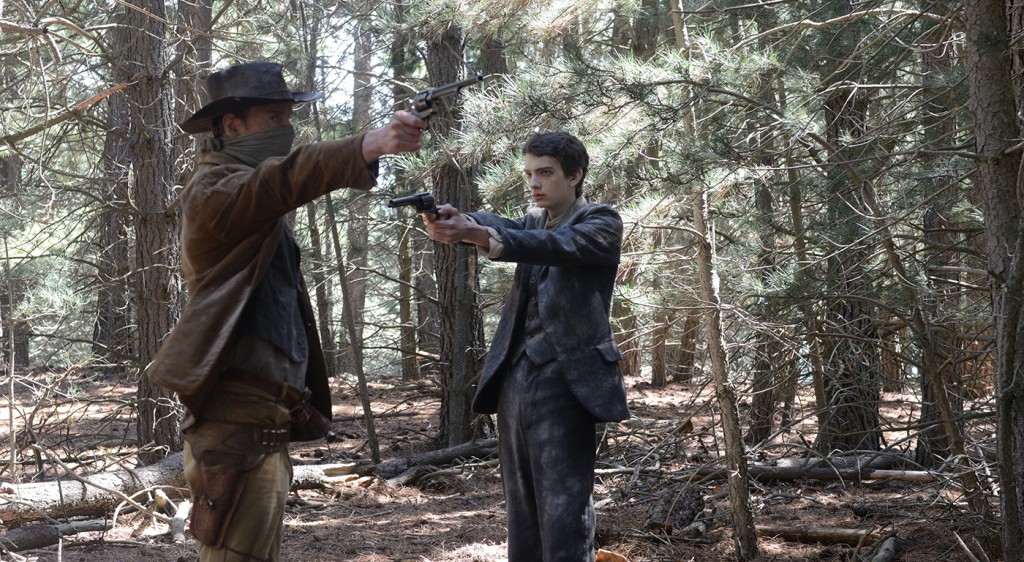 Some will argue Slow West isn’t a film to be judged on authenticity or realism. It was filmed in New Zealand, which proves an attractive substitute for a typical Western location. The woodlands here, photographed through wide and long shots, characterise the narrative as a fairytale where a young man finds himself in the physical danger and metaphor of the forest. The film is aiming to become a semi-comic, tragic love story and a Darwinian examination of those adapting to the West. Jay meets a writer in a travelling caravan who tells him it’s a new world for them and the Indians. Like the Indians who die, some will not survive the brutality of the West where money and personal ambition leads to uncontrollable violence. But adding surrealism is an obtuse stylistic goal, only for arthouse posturing. There are strange unexpected shots in the film like a low angle to the sky where Jay aims his gun and makes the stars appear and weird episodes like Jay’s encounter with the travelling writer. Also bizarre is a dream sequence with Rose and a baby, where I wasn’t entirely sure if the dream belonged to Jay or Silas or both men collectively. While you appreciate the originality, it feels showy or lacking in purpose and meaning. 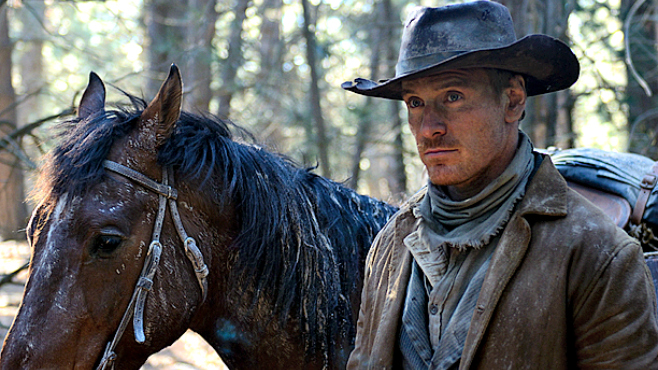 The two lead performances aren’t hugely stretched by the minimalist dialogue and characterisation but work best in close-up shots. Smit-McPhee is a good young actor and while it’s not a role that shows a huge spectrum of emotion, it’s in the tighter shots like when he is being interrogated by Payne that he shows nervous energy in the character. Michael Fassbender is a solid presence whose best technique here is acting without dialogue, using his eyes, but there aren’t that many close-ups in the film to give him the opportunity. His character changes, unlike Jay who doesn’t have an arc but persists with his goal. Even a desperate immigrant he kills in a strong early scene is superfluous to the emotion or the interior of his character. The climax of the film robs him of learning anything or reaching a point of understanding about the West. The ending is also implausible and convenient, adjoining two characters who barely know each other. Could it be another dream? Maybe it’s a case of the film being too brief because while it touches on immigrants, adaptation and change, it doesn’t always seem credible.