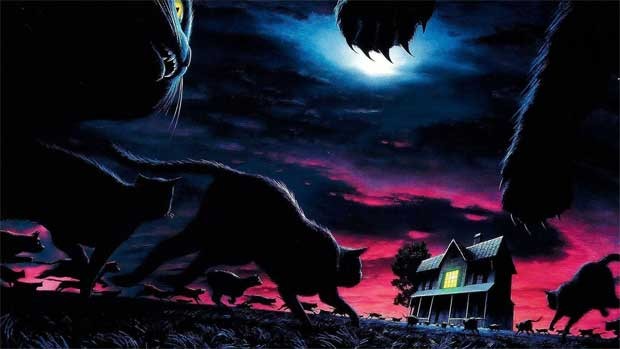 Summary: Sleepwalkers is well presented on Blu-ray but is laughable horror

Stephen King is a once in a lifetime writing phenomenon. Prolific since the late 1960s, he singlehandedly inspired the horror fiction boom that swept through the 1980s before it imploded under an avalanche of poorly written dross a decade later. His depiction of middle America under threat from rabid dogs, vampires, buried alien spacecraft, haunted hotels and monstrous clowns struck a chord with readers who regularly elevated his books to the top of the bestselling charts year after year after year.

It’s no surprise then that Hollywood came knocking. As early as Carrie, his breakout novel, Hollywood saw the potential to monetise his works. Brian de Palma’s genius in adapting Carrie is still memorable forty years later, it’s tale of a teenager’s coming of age soured by bullying and an insane mother still eminently watchable. Latter, Stanley Kubrick took The Shining and made it very much his own, inspiring an iconic performance from Jack Nicholson as well as a wonderful Halloween episode of The Simpsons some twenty-five years later.

And it’s not just King’s horror writing that Hollywood has plundered. Apt Pupil, starring Ian McKellan as a fugitive Nazi, is an unjustly neglected gem that brings the very real horrors of the Holocaust into modern day America. Of course, the behemoth King adaptation is The Shawshank Redemption, a staple of the Nine Network when the cricket is rained out, and a movie that is very much centred on the human relationship between Tim Robbins and Morgan Freeman.

Stephen King, as outlined in his landmark non-fiction examination of modern horror, Danse Macabre, was no stranger to film and television during his youth. The Twilight Zone and The Outer Limits were shows that inspired his early short fiction writing, as well as the Edgar Allen Poe movie adaptations in the 1960s. His other great love was the EC horror comics from that same period, a direct inspiration of King’s screenplay for 1982s anthology horror movie Creepshow, where he also made an appearance.

Of course, not every movie adaptation of King’s movies have struck cinematic gold. What works in the printed word doesn’t necessarily translate as well to the visual medium. Often times it is down to the material itself, such as with Maximum Overdrive, an awful adaptation of a one note short story. Pet Semetary was a half decent stab at adapting the brilliant, but relentlessly grim book of the same name, and only falls short because the director perhaps didn’t take the material as seriously as he could have.

And then you have a complete stinker like Sleepwalkers. Scripted by King and directed by Mick Garris, 1992s Sleepwalkers tells the tale of a Mary Brady (Alice Krige) and Charles Brady (Brad Krause), mother and son quasi vampire/werewolves, who travel from town to town in search of the valuable life essence of young virgins. When Charles finds pretty Tanya Robertson (Madchen Amick) it looks like another young woman is set to die.

That very brief précis of this terrible, terrible movie is all you really need to know. The wafer thin, poorly structured script barely sustains the running time of 89 minutes, and it painfully shows. The standout performance is from Alice Krige, who invests the script with an energy it doesn’t deserve. Brad Krause hard tries with some terrible material, and Madchen Amick looks pretty in a nothing role that only demands of her that she play the screaming victim. Other than that, the rest of the supporting cast match the overall mediocre tone of the movie.

There is a certain charm to the first twenty minutes of the movie. King’s depiction of small town America is characteristic of his writing and it shines to a small extent here. But after Charles loses control on a date with Tanya to (of all places) a graveyard, any semblance of character goes straight out the window. Krause chews the scenery in a scene that makes a nonsense of the idea that he and his mother are forced to skulk from town to town. Instead, he goes on a bloody rampage that can do nothing but draw attention to himself, which is the last thing he should be doing.

Other supporting characters similarly act out in bizarre ways that fatally undermine the movie. Horror movies require a delicate balancing act of luring in the viewer without fatally breaking the spell being woven about them. When you have actors like Ron Perlman (Hellboy) who appears towards the end of the movie and proceeds to play his role completely over the top, for instance, any chance the movie has of being taken seriously goes right out the window.

The nadir of the movie has to be the cats. As explained at the outset of the movie, the fatal weakness of the Sleepwalker is the cat. As the movie progresses, cats begin to gather around the house where Brad and his mother live. By the end of the movie, there are dozens of cats, in the garden, in the driveway, or prowling on the roof. As a threat to the Sleepwalkers, they are pretty pathetic. So when the climatic scenes are played out, we see cats leap (well, thrown from off camera) onto the Sleepwalkers, biting and clawing their way to victory. It’s simply laughable.

Horror movies in this period were going through a trough they only emerged from with the satire of the Scream franchise. King would shrug off the failure of this movie, and move into a new era of success as a novelist. He would write scripts again, notably for The X-Files and the tv series adaptation of his novel Under the Dome, but none, thankfully, would approach the depths explored with Sleepwalkers.

A word of warning – the back of the blu-ray promises a number of extras. However, on the disc, the only extra is the trailer. Which is perhaps a blessing as anything that prolongs your viewing of this disc must be harmful for your health. 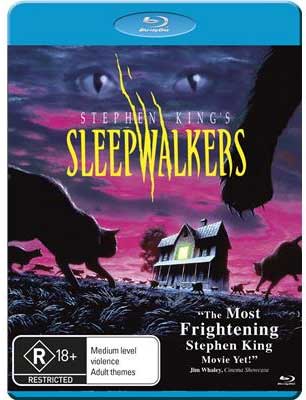