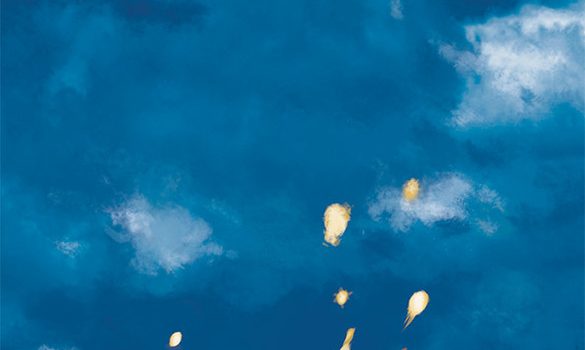 Summary: An explosive payoff as the series continues.

Here there be Dragonflies Part 5

Skyward takes place in a world where gravity suddenly became a fraction of where it is now.  Bugs are of enormous size and people can fly.  This series focuses on Willa Fowler, a young girl that delights in being able to fly.  Then she got caught up in her father’s plans to bring gravity back. 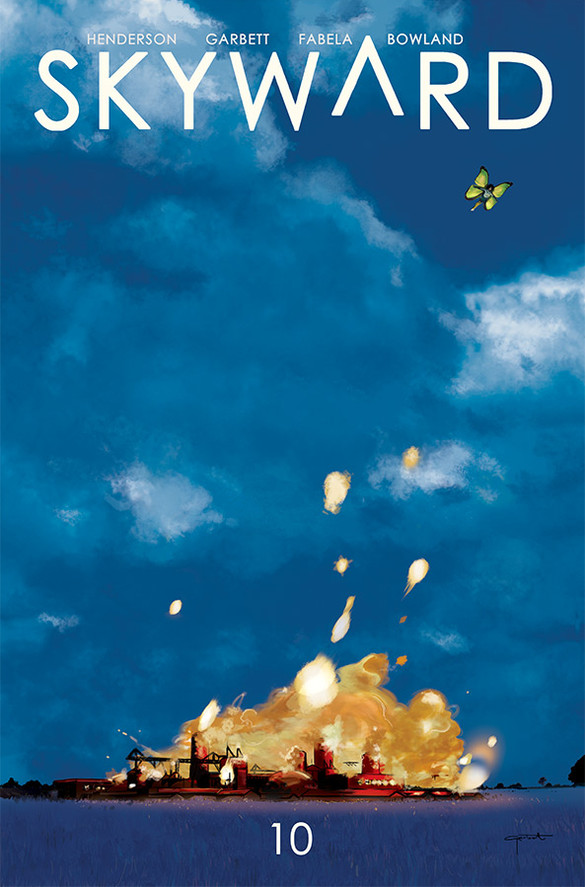 The cover of this issue features a farm burning in the foreground, balls of flame rising into the sky, yet surprisingly smokeless.  The daylight sky in the background is a brilliant blue, dotted with a few wispy clouds.  Willa is in the upper right, floating on the wind with butterfly wings strapped to her.  The colour is amazing in this cover.  It looks less like a standard cover and more like a painting.  The way the sky is drawn, the appearance of the burning city, and of course the flames themselves.  The cover also does a great job juxtaposing the peace of the sky, with Willa soaring peacefully among the clouds, and the chaos of the burning farm below.  All in all, it’s just a great work of art. 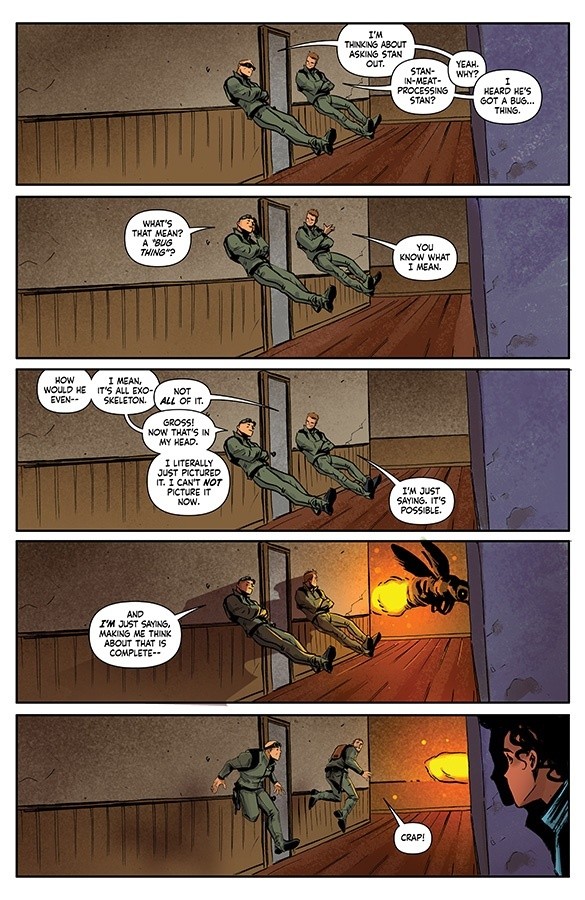 Lee Garbet and Antonio Fabela handle the art and colours respectively.  There are a lot of neat features in the art.  The image of seeing characters just floating in the air took a bit of getting used to, but is a perfect fit for the story.  As well, the images of giant insects that are used for a variety of purposes is also interesting.  The in-character reactions of these things normalize them pretty quickly, making you realize that these characters are used to them – this is a part of their everyday life.  The colour just brings the world to life.  There’s nothing that overtly stands out, yet nothing that takes away from the art either.  It’s a well coloured and well drawn book. 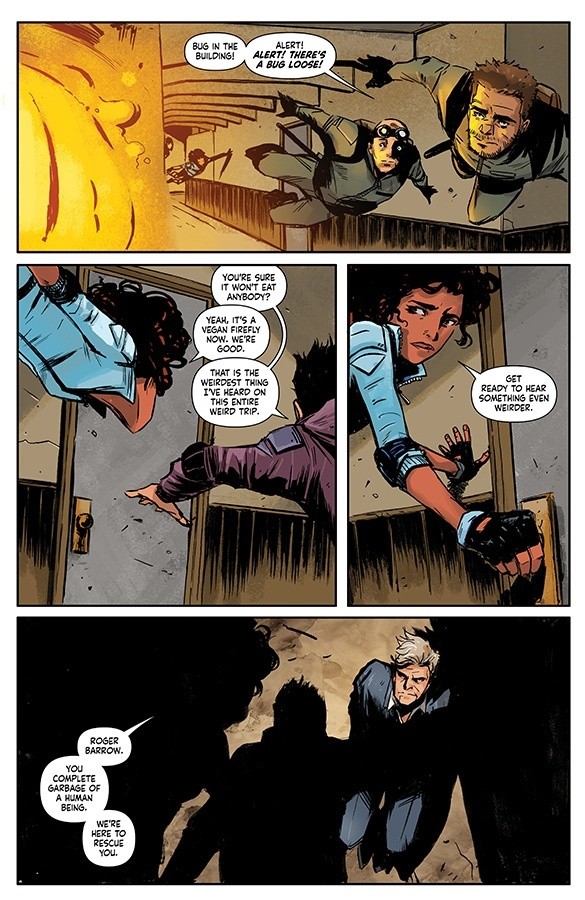 John Henderson has written a great development issue.  While there isn’t a lot of action in this particular issue, there is a lot of strong build for the series moving forward.  It’s also a relatively easy book to get into for new readers, as the characters and story are engaging, and through conversation give a rundown of what has happened previously and what is potentially on the way.  This issue advances the plot and grows the characters in preparation for the explosive battle on the horizon.

The issue begins on the farm, with two guards floating outside a door in a hallway.  Then a giant firefly tears down an adjoining hallway and they quickly move to pursue and ensure it can’t hurt anyone.  Willa then appears and uses the distraction to rescue Roger Barrow, who she feels is needed to get to Chicago before the angry army of farmers.  In Chicago the one solution to stop the oncoming war is waiting.  Willa’s father’s research that could undo the lessened gravity and return it to normal.  The issue follows as plans go awry, and leaves our heroes scrambling to get ahead of the army to stop the approaching conflict. 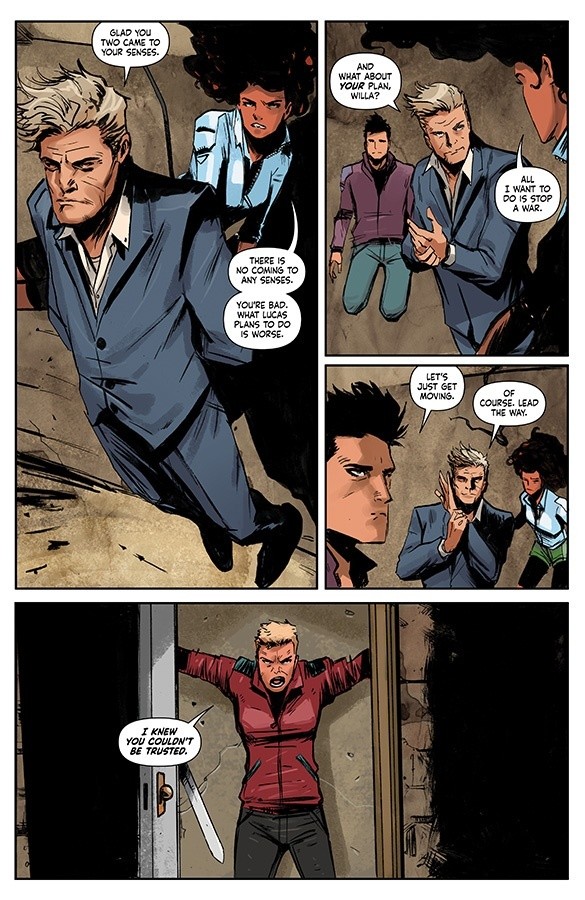 This is an enjoyable issue.  It’s very plot heavy, though at no point does the limited action feel forced or drawn out.  The book is well paced, and contains enough expository information to catch a beginning reader up on the plot.  Willa shines as the hero of the story, acting decisively and never backing down when faced with adversity.

The world of Skyward is attractive in and of itself.  The appearance of humans floating in mid-air and the giant bugs are also a treat.  It adds a uniqueness to the world and the story being told.  The art stands out more for the uniqueness of the world it describes rather than any specific stylistic touches.  That said, the book is great to look at.

Skyward #10 is an enjoyable read building to an explosive payoff as the series continues! 4 out of 5 stars.