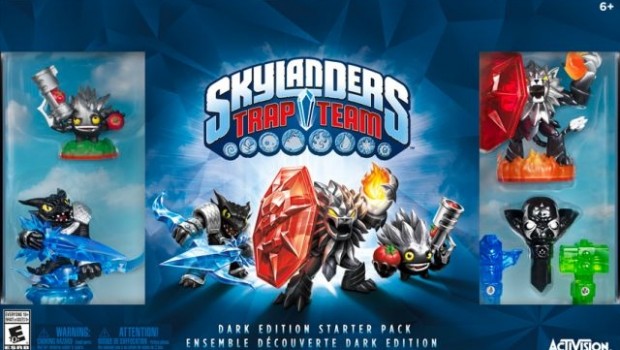 SYDNEY, NSW. – AUGUST 13, 2014 – Activision Publishing, Inc., a wholly owned subsidiary of Activision Blizzard, Inc. (NASDAQ: ATVI) announced today that it will bring the complete Skylanders Trap Team videogame to tabletsi at launch, marking the first time a full Skylanders® game will be available on iPad®, Kindle Fire and Android tablets day-and-date with the console version. The tablet version of the game delivers the same experience with console-quality graphics and comes with its own high performance controller, delivering yet another significant technological leap to the Skylanders franchise.

The Skylanders Trap Team Tablet Starter Pack will include a Bluetooth® Traptanium PortalTM; an embedded Bluetooth® controller to provide the best gameplay experience possible; a built-in tablet stand; two Skylanders characters; two Traps and a display tray that lets Portal Masters keep track of the Traps they’ve collected and which villains they have trapped.

“Skylanders has become an incredibly appealing brand and franchise for kids around the world. And the tablet has become an incredibly appealing gaming platform for kids around the world. But we haven’t been able to bring the full Skylanders experience to the tablet until now,” said Eric Hirshberg, CEO of Activision Publishing. “We always want to deliver breakthrough experiences, and we also always want to be wherever gamers want to play. This is a chance for us to bring the magic of Skylanders to a whole new platform and audience. Whether you want to sit on the couch and play with the wireless controller, or play on the go using just the tablet itself, this provides a great experience for gamers.”

Skylanders Trap Team brings a ground-breaking innovation to the Skylanders franchise by reversing the magic of its signature Toys-To-Life™ play pattern to let kids bring life to toys. Skylanders Trap Team allows Portal Masters to seek out the most wanted villains in all of Skylands, defeat them and pull them out of the game into their living rooms by capturing them in magical Traps. Fans can then play as both heroes and villains who join the forces of good in an all-new adventure. Now, for the first time in franchise history, fans can experience a full Skylanders game on the go, wherever and whenever they want.

The tablet version of Skylanders Trap Team upholds the same gameplay-driven adventure as the console version with console-quality graphics,ii complete with lush, expansive environments that push the technological boundaries of select tablet devices. Like the console version of the game, all toys will be cross-platform compatible, with all skills and upgrades intact.

The Skylanders Trap Team Starter Pack will be available on October 2nd in Australia and October 8th in New Zealand on the following platforms: a variety of iPad®, Kindle Fire and Android tablets; Xbox One and Xbox 360 games and entertainment systems from Microsoft; PlayStation®4 system; PlayStation®3 system; Nintendo’s Wii™ system and Nintendo’s Wii U™ system. A different, unique adventure also will be available on the Nintendo 3DS™ hand-held system.
About the Skylanders® Franchise