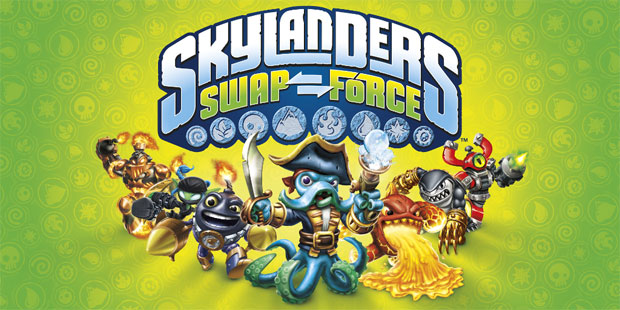 Sydney, Australia, Oct. 16, 2013 – Portal Masters can now wield the power of choice as they defend the Cloudbreak Islands and battle the evil Kaos (and his mum) when the magic of Skylanders SWAP Force™ hits store shelves nationwide today. Available now for Nintendo Wii™, Nintendo Wii U™, Nintendo 3DS™, the Xbox 360 games and entertainment system and PlayStation®3 computer entertainment system as well as day-and-date for PlayStation®4 and Xbox One, Skylanders SWAP Force introduces an all new innovative play pattern – swapability – that lets players freely interchange the top and bottom halves of 16 special characters by mixing and matching their powers and moves into more than 250 unique character combinations*, that are brought to life in the game.

The third installment in the popular franchise from Activision Publishing Inc., a wholly owned subsidiary of Activision Blizzard, Inc. (NASDAQ: ATVI), Skylanders SWAP Force is already positioned to be one of the must-have games this Christmas having been named a finalist once again for K-Zone’s annual Toy of the Year competition, following consecutive wins in 2011 and 2012.

“Skylanders is a brand built on one thing: magic. With each and every Skylanders title, we want to deliver new, delightful innovations to our young fans that continue to blur the lines between physical and digital play,” said Eric Hirshberg, CEO of Activision Publishing. “With Skylanders SWAP Force, we’ve taken this genre to a whole new level by giving players the greatest power of all: choice. In a franchise known for breakthrough innovation, I have no doubt that SWAP Force is our most innovative Skylanders game yet. And we’re thrilled to share it with fans of all ages all over the world today.”

Skylanders SWAP Force features a new next generation graphics engine** that brings the game’s detailed characters and rich environments to life like never before.   The game also features new abilities – such as flying, climbing, and teleporting – which can be used throughout Skylands.  Friends and family can join the fun with drop-in/drop-out cooperative play as well as experience action-packed gameplay in various Battle and Survival Modes that feature all new arenas.

Additionally, players can embark on an all new unique Skylanders SWAP Force adventure on the Nintendo 3DS that features game levels and story that are unique to this platform. The 3DS version also includes three new characters – Rattle Shake, Volcanic Eruptor, and Free Ranger – which are not found in any other Skylanders Starter Pack. All characters introduced in Skylanders SWAP Force will also be playable on Skylanders Lost IslandsTM and Skylanders BattlegroundsTM mobile games, both of which are available now on iOS, and on Android on November 1.