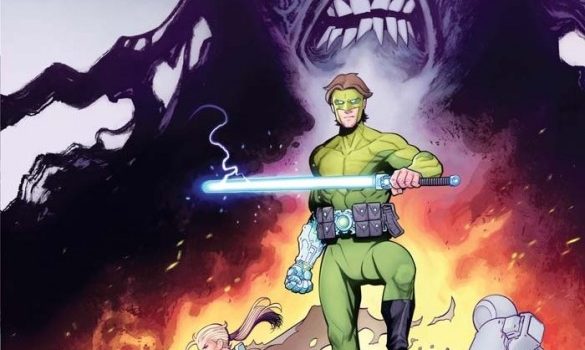 Summary: Great way to debut Brennan's heroic adventure into the magic land, and Machine Boy's quest to atone for his destructive secret.

The second chapter in Rick Grimes 2000 is created by Robert Kirkman, artist Ryan Ottley, and colorist Dave McCaig. It sees the protagonist, Rick, battle one of the alien overlords in their true monster form. At this moment, Rick realizes why the aliens are to be feared, but this does not stop him from going to toe with the alien monster. In the fight, Lori gets killed and eaten by the alien to ensure that she is not resurrected, and Rick’s body gets torso gets ripped in half. However, the action is interrupted by zombies, and an introduction of another Walking Dead’s iconic character, Andrea, kills the zombies and aliens and saves rick. The chapter concludes here, leaving readers with the impression that there will be more action and plot twists in the subsequent issues. The chapter excels with its artwork that does not shy away from showing gore, illustrated with the gruesome deaths of the alien, some zombies, Lori, and Rick’s almost death.

The second story, “Birthright: Ghost Right,” is written by Joshua Williamson and artist Andrei Bressan. It introduces the brother of one of the legends, Mikey Rhodes, who waged war against the God-King Lore. In this issue, Brennan is searching for purpose in the world, leading him to the only place his brother never seems to visit. While there, he encounters one of Mickey’s former foes, then turned friend, Death, who takes the name of Jackson. Jackson uses his powers to conjure up some monsters that see the two fight side by side and having fun defeating the newly created monsters. During the fight, the reader learns that Brennan has powers of his own, but the comic does not dwell deeper into how they work. Unlike the first story, the second tones down the gore seen in the first.

The third story, “Summer Daze,” comes from the minds of artist and writer Tri Vuong, cartoonist Irma Kniivila and letterer Aditya Bidikar. The story is set in a futuristic world that sees robots, humans, and various animals work together in their society. It centers on a lone robot boy who’s driven by the need to help others. At the end of the day, the robot takes inventory of all the people he has helped or things fixed. Despite his efforts, we soon learn that he hides a dark secret, where he was responsible for the destruction of his town. I can’t wait and see what becomes of our hero when his graphic novel debuts.

The fourth story, “Leaving,” is set in a town, Stillwater, where everything stopped aging completely, leaving a world with no physical damage, disease, or hunger. As a result, the town residents decided to hide their secret by disallowing anyone from ever leaving. The story follows a young boy’s life and his confrontation with his immortality. Even though he thinks that it is a curse, he still doesn’t have the courage to leave just yet.

Among the four, I really enjoyed reading “Leaving” and “Summer Daze.” “Leaving” excels where it explores humanity’s different interpretations of the concept of immortality, while the latter by adopting a cartoonish visual style that complements the robot futuristic setting the comic is based on.