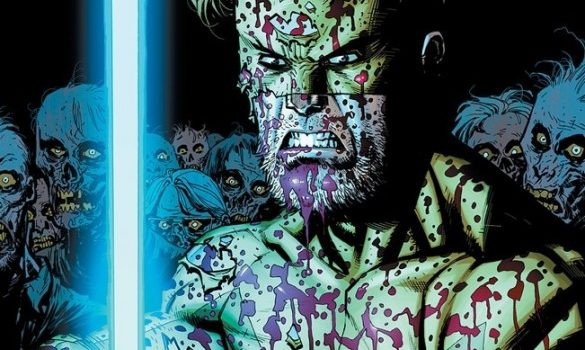 Summary: The different and varying writing and artwork styles between the four stories make it a worthy read, especially UltraMega and the ironic comedy seen in Manifest Destiny.

“Rick Grimes 2000: Chapter 1”, created and written by Robert Kirkman and drawn by Ryan Ottley, continues The Walking Dead narrative where Rick wakes up in a futuristic post-apocalyptic world. Despite being in the future, the reader soon learns that there is more to the zombie apocalypse caused by aliens intending to conquer the earth, as they round up the survivors (not zombies) and use them as slaves. The future is also different, where the survivors now have various superpowers, taking the form of bodily modifications. “Rick Grimes 2000” is similar to The Walking Dead with its various plot twist, leaving the reader with questions such as: Will he surrender? What is going to happen next, or rather, who is going to die? 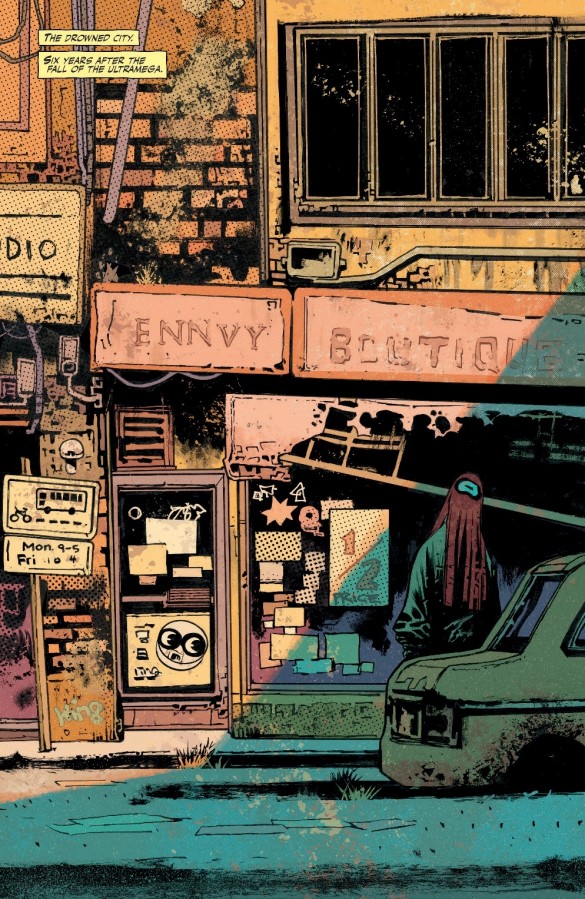 The second story, “The True Story of The UltraMega,” is created by James Harren and colorist Dave Stewart. The story takes a different and slower approach from the first one occurring as a conversation between three people (also in a post-apocalyptic world). Among them is an adult who witnessed the fall of the UltraMega, individuals imbued with incredible powers. I was more drawn to the adult’s recollection of the story, especially the part where he haunted his humanity and inability to help himself while relying on the heroes to be saved. He also highlights the need for humanity to rise and be heroes themselves since the UltraMega fell. I was also drawn to the visually spectacular fight between the Kaiju and the UltraMega, where it complements the adult’s story of their end. The coloring is consistent all through using different colors, including yellow, when illustrating the adult’s perspective in the fight, together with various shades of purple and blue (depicting the Kaiju and UltraMega man) contrasted with the city’s green background.

“Manifest Destiny: Fezron Fezroff,” written by Chris Dingess, drawn by Matthew Roberts, and lettered by Pat Brosseau, tells the story of a hero out to find the missing Royal Eggs. The story has a Looney Tunes vibe, especially how the birds are drawn and the story’s comedic nature. The story is ironic where the most incompetent bird, Dawhogg, takes up the task of retrieving the eggs. In his adventure, he encounters the cheeky mouse, who drugs him; a raccoon which he murders and wears its skin, and the gruesome killing of the thief by our hero. The writers continue the comedic irony where despite succeeding in returning the eggs, the “hero” has managed to crush all the eggs due to the fight with the thief. 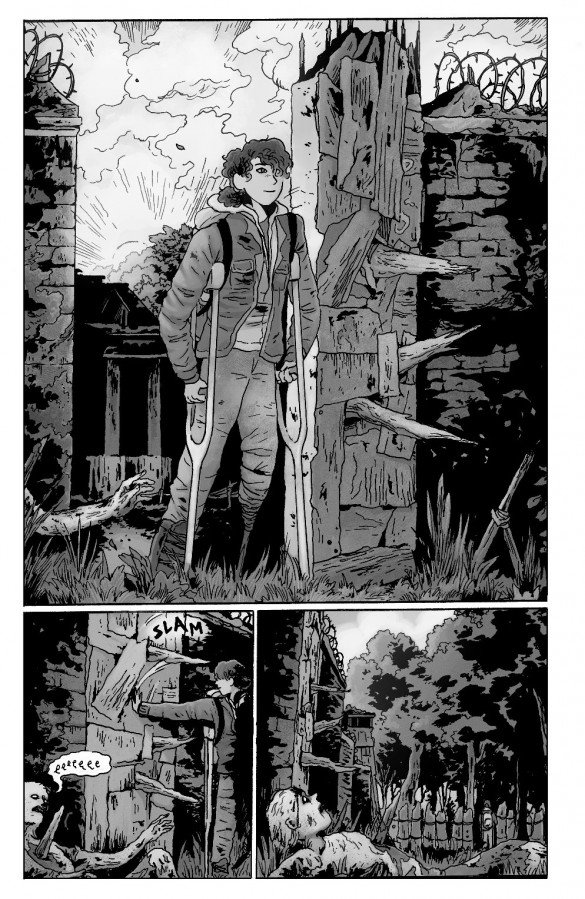 “Clementine Lives” continues Clementine’s story from TellTale’s game The Walking Dead as she grew as a child born in the zombie apocalypse. The comic sees her introduction into the comic genre as she is leaving AJ. Despite being on crutches, she is formidable, where she kills a few zombies without any fear. The creator has opted to use black and white to depict the story, which furthers the post-apocalyptic vibe seen in The Walking Dead’s games and series. Clementine’s story is expected to continue in summer 2022, and I can’t wait to see how her character develops in consequent comics.

SkyBound X #1 anthology features some of the best characters and adaptations from the Walking Dead series. The best aspect of the first issue is the use of different stories that vary in their visual styles, plots, and perceptions of the post-apocalyptic genre.