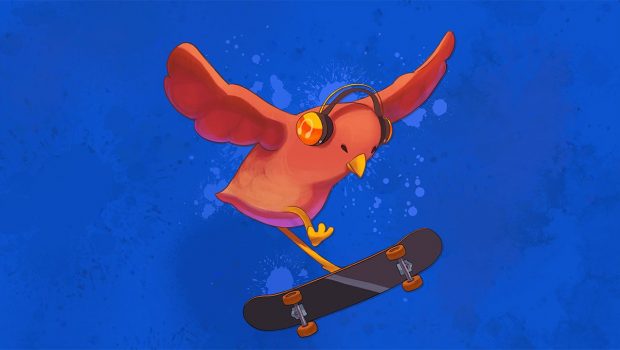 Summary: SkateBIRD is an adorable, flawed riff on the skateboarding genre

Half game, half meme, SkateBIRD’s merits equal its sheer stupidity, but while it shows off endless character through its proverbial plumage, it’s marred by a multitude of problems that hamper this otherwise flighty skate sim.

Beneath its absurd skin, SkateBIRD is a Bonafede tiny–Tony Hawk Pro Skater dupe, with five levels full of challenges, secrets, and plenty of grinds to pull off. It’s more akin to the latter than you might think, with similar (although not as polished), controls as its bigger, more legitimate counterpart. Your bird pushes themselves forward with a click of the A button, with the rest of the right Joy Con buttons reserved for ollies, grinds and grabbing air. 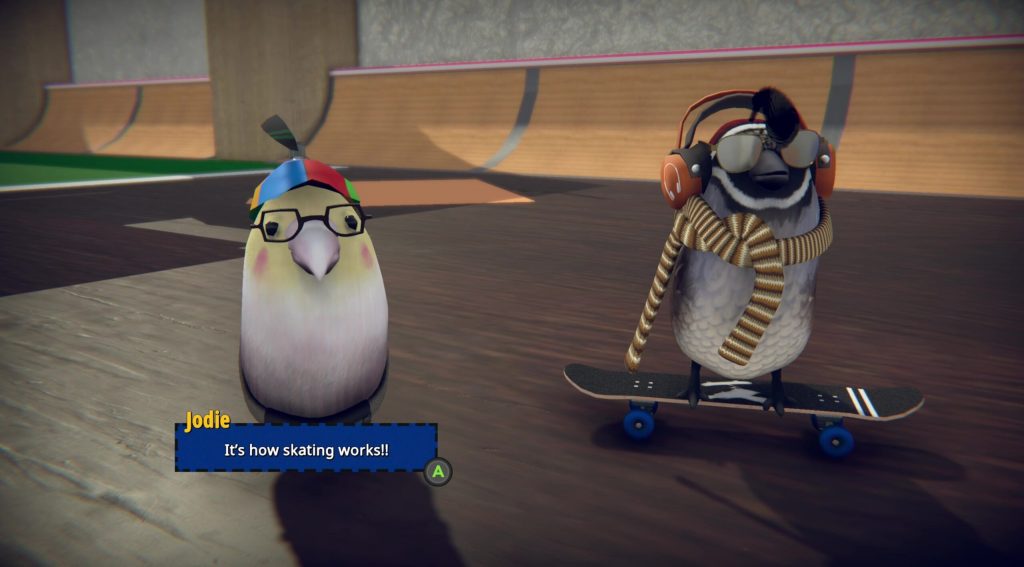 Like Pro Skater and Skate, practice makes perfect; the more you play, the more attuned you get to the controls, the more satisfying tricks and combos are to pull off. Unlike its contemporaries, however, SkateBIRDs titular heroes can use the perks of being a bird to aid them on the skateboarding circuit. Having wings and hollow bones means you can flap to gain a little height, but you still need to build your Fancy Meter to gain speed and, in turn, pull off impressive tricks.

Putting points into the Fancy Meter is easy, but keeping it up is difficult, as SkateBIRD can be maddeningly inconsistent. It’s a combination of issues; occasionally unresponsive controls, propelled by a janky camera that makes the whole thing frustrating. The latter is, surprisingly, more of a problem than any controller irks, as having the screen swing wildly as it follows your movements is distracting and often leads to unfair mistakes. 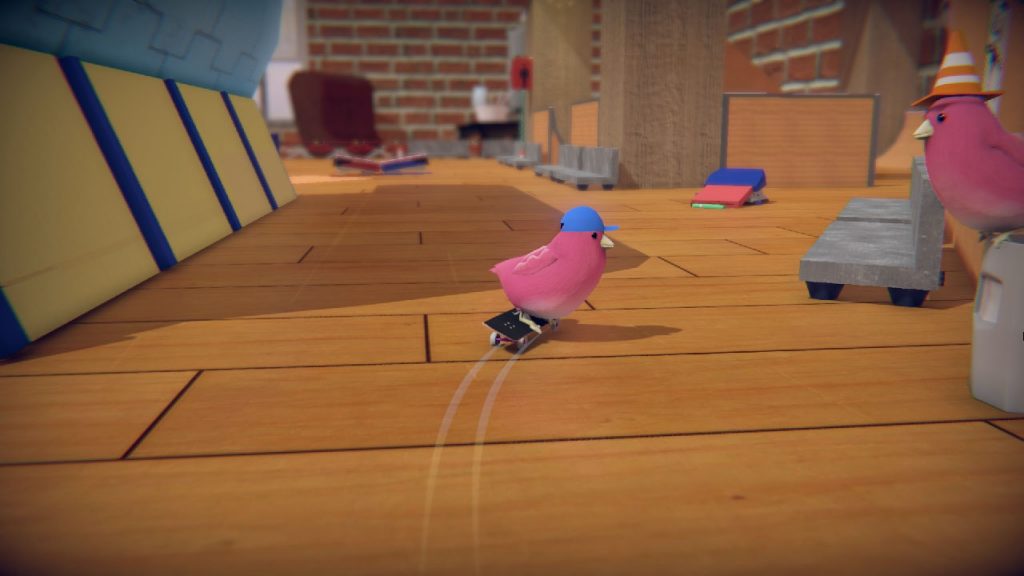 Luckily, there’s plenty of options to make the game easier, like the ability to remove balancing challenges completely, and the option to make your bird less likely to fall off his board, and it’s a good thing; watching my owl with an eye patch roll his little rotund body across the Micro Machine-esc living room was hilarious for a while, but it quickly became tedious. Unfortunately, adding these modifications does feel like it removes some of the challenges associated with the genre by doing so, so getting a balance between the two can be frustrating.

While there’s only five maps, there’s a decent amount of variety in challenges and map design, even if some areas are better than others. Most challenges involve the usual stuff;  ‘fetch these items’, ‘build up enough combo points’, and, while it can be a little tiresome late-game, I can’t say I ever got bored of playing skateBIRD. I did however find accessing challenges frustrating, as they’re dished out by NPCs who, in theory, are easy to spot, but they have a tendency to move without warning or any noticeable pattern. I often found myself getting into a rhythm, nailing challenge after challenge, only to then have to hunt down the next mission because my bird taskmaster has, quite literally, flown the nest. 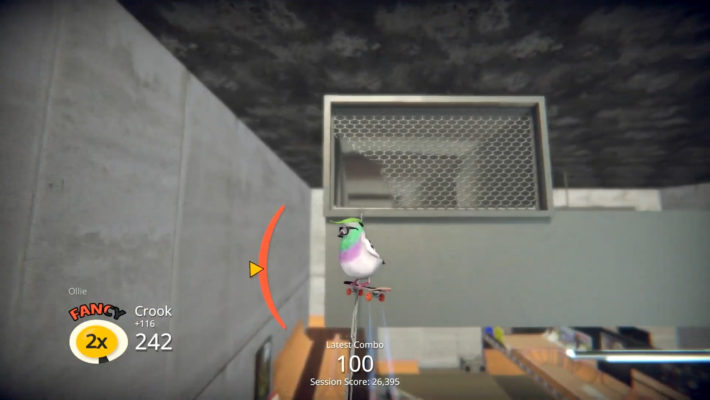 It’s hard to stay mad at a game called SkateBIRD, with its charming, self-aware cast of characters and stupid, stupid collection of birds. There’s a very loose story keeping the whole thing together, but it’s mostly puns, arbitrary nonsense birdspeak (tenfold, if you increase the amount they go full bird-mode in the settings), but honestly, I’m okay with it. You know what you’re getting yourself in for, if you pick up a game called SkateBIRD, so it doesn’t really need deeper connective tissue holding it together.

That being said, and I guess it’s pretty obvious, but SkateBIRD is unfortunately a relatively ugly game, especially from a distance, with a weird, hazy filter on the background of each map that can be distracting. The birds look fine, though, as do the boards, but it’s a shame they have to flip tricks across textureless flooring and lifeless, muddy backdrops. Oh, and in case you were wondering, there’s a great soundtrack, which, while not full of popular pop-punk bops akin to that found in the Tony Hawk series, there’s a seriously brilliant selection of original tunes that complement the game’s whimsical, silly nature.

SkateBIRD is ultimately, incredibly charming, but incredibly flawed. It’s fun, when it doesn’t punish you for its own shortcomings, and the blurry backdrops are straight bargain bin-PS1 fodder, but I still can’t help but get drawn back into the odd, goofy world of these skating, winged weirdos.