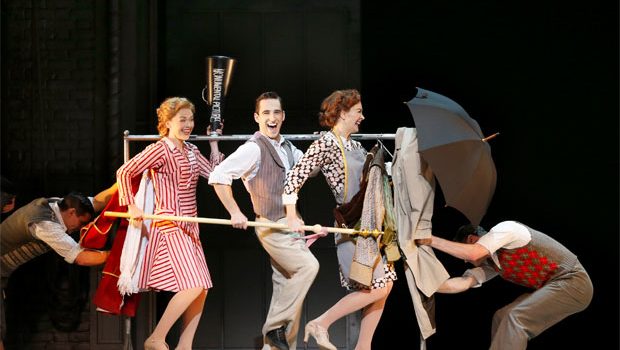 The splash-hit West End stage production SINGIN’ IN THE RAIN is currently playing at Melbourne’s Her Majesty’s Theatre with only 10 days to go before transferring to the Sydney Lyric on July 7th.

Unfortunately, leading man Adam Garcia (playing the role of Don Lockwood) suffered an injury whilst performing on stage last Sunday which has been identified as a tear in his calf muscle. As a result, Mr Garcia will not be able to perform for potentially up to six weeks.  Mr Garcia has been exciting audiences in Melbourne with his performances but sadly, will now be unable to complete the season at Her Majesty’s Theatre. His injury also rules him out of the opening weeks of the Sydney season.

Stepping into the role of Don Lockwood for the duration of Mr Garcia’s absence will be talented actor Grant Almirall. Mr Almirall has starred in many international productions around the world, and has performed the lead role of Don Lockwood in Singin’ in the Rain over the past 18 months on its international tour to South Africa, New Zealand and Hong Kong, to great popular and critical acclaim.  He has been part of the Australian company as the stand-by Don Lockwood. New Zealand critics praised Mr Almirall’s combination of ‘balletic elegance…with gleeful exuberance’, his ‘sweet tenor voice carrying the delicate emotions of You Were Meant For Me’ and his ‘charming and joyful rendition’ of Singin’ in the Rain.

Rob Mallett, will also perform the role of Don Lockwood in some performances.  He is one of Australia’s emerging musical theatre stars.  Both of these gentlemen will bring all the charm, charisma and energy to the role, thrilling audiences until Adam Garcia is able to return to the stage.

★★★★★ “Even the rain can’t stop this bountiful tap-dancing beauty from glowing brightly in the streets. This latest production is a brilliant and vibrant explosion of bliss, laughter and formidable tap skills” Time Out

★★★★½ “Superb adaptation of arguably the most iconic movie musical of all time. Every second is packed with bright, buoyant, whip-smart energy…the principal cast are solid gold, a trio who are almost flawless” Limelight

Produced in Australia by Lunchbox Theatrical Productions, Michael Cassel Group, David Atkins Enterprises and Dainty Group, the popular musical is thrilling audiences as they experience high-octane choreography, sumptuous sets and costumes and the exhilarating spectacle of rain live on stage!

With the help of 12,000 litres of recycled water, the audience can enjoy one of the most famous dance scenes live on stage, with some leaving the theatre a little wetter than when they arrived!

SINGIN’ IN THE RAIN playing in Melbourne until July 2, opens at Sydney Lyric on July 7 before seasons in Brisbane, Adelaide and Perth.