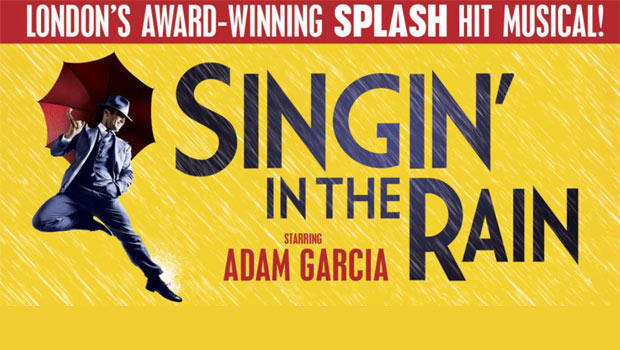 The splash-hit West End stage production SINGIN’ IN THE RAIN will open at Melbourne’s Her Majesty’s Theatre in May 2016 starring an all Australian cast including star of stage and screen Adam Garcia. Tickets will go on sale this coming Friday 8 May.

Making a splash from the moment it premiered, this sensational production of SINGIN’ IN THE RAIN extended its original run at the Chichester Festival Theatre in the UK due to unprecedented public demand, before transferring to the famous Palace Theatre in London in 2012. Now, after a sell-out West End season, unparalleled praise from critics and audiences alike, four Olivier Award nominations, a major UK tour, New Zealand season and forthcoming Asian Tour, SINGIN’ IN THE RAIN is set to delight Australian audiences in 2016 with seasons also confirmed in Sydney, Brisbane, Adelaide and Perth.

Adam Garcia will star in the lead role of Don Lockwood in this Australian production. Adam most recently graced Australian TV screens as a judge on popular program Dancing with the Stars and in the UK as judge on Got to Dance. His incredible dance ability was first recognised when he was cast alongside David Atkins in his original production of Hot Shoe Shuffle in Australia and the UK. Adam was also a founding member of the hugely successful tap group Tap Dogs with Dein Perry.

In addition to tapping his way around the world Adam also starred in the Australian film Bootmen based on the story of the Tap Dogs. Since then the multi-talented performer has gone on to achieve international success with roles in West End stage productions including Saturday Night Fever, Wicked and Kiss Me Kate winning him critical acclaim and also two Olivier Award nominations. Adam has also starred in many Hollywood films including Coyote Ugly, Riding in Cars with Boys, Confessions Of A Teenage Drama Queen and Love’s Brother.

“I can’t quite believe I get to play a role in a musical that inspired me to become a performer.’ Adam said. “I also can’t believe that I’m coming back to my home country to perform in a musical for the first time in 20 years. It really is a dream.”

Further casting will be announced at a later date.

This spectacular production is based on the iconic 1952 MGM movie of the same name starring Gene Kelly and Debbie Reynolds. It is packed full of the charm, romance, comedy and Tinseltown glamour of the much-loved movie and features all the songs from the glorious MGM score including ‘Good Morning’, ‘Make ‘em Laugh’, ‘Moses Supposes’ and the classic ‘Singin’ in the Rain’.

The movie’s iconic choreography is flawlessly recreated, and with the help of 12,000 litres of recycled water, the audience can enjoy one of the most famous dance routines live on stage, with some leaving the theatre a little wetter than when they arrived!

To achieve the famous ‘Singin’ in the Rain’ scene, the production uses over 800 metres of flexible pipe work, a 9000kg water tank and a water system that creates a downpour from above as well as flooding from below the stage, in total ‘raining’ over 12,000 litres of recycled water per performance.

MELBOURNE TICKETS ON SALE FRIDAY 8 MAY 2015