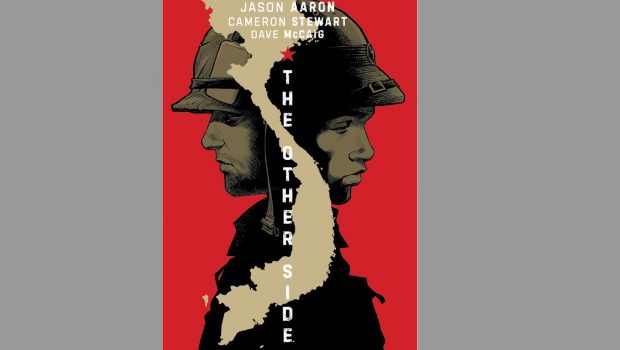 The Other Side Comic Book Review

Summary: Far from a glorification of war, this book stands as an insight into the similarities on both sides of the battle lines.

Many comics deal with heroism, super heroes, good versus evil, but occasionally one comes along the is grounded in truth and is perhaps more visceral and to the bone than some would like… but in so being they elevate the humble comic book/graphic novel to something with a great deal of meaning and importance. The Other Side is one such comic. Tackling the Vietnam war from both sides, a recruit for the U.S. and a recruit for the N.V.A. 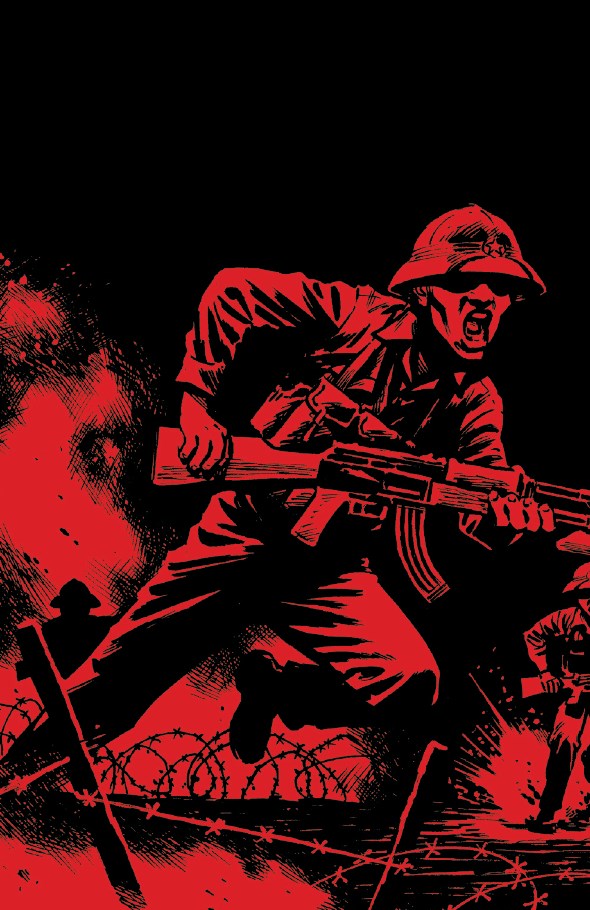 Comics have a unique ability to tell the story through the characters own mind, their internal monologue is able to seamlessly take us along and inform us of everything that is going on. In The Other Side that internal monologue is arguably as important if not more so than any actual dialogue with the other characters. Given the inspiration and lineage of this fine work it’s not surprising to see scenes that will be familiar to anyone who has seen Full Metal Jacket or even similar films… these are the important scenes that show just how dehumanizing the military can be and how close it can push someone to insanity. Later of course we see how war itself can also push someone further (or perhaps well beyond) insanity and how the horrors aren’t just one moment in time but a moment that echoes throughout the life of those who have lived the waking nightmare. In tackling the events from both sides of the battle we are shown just how similar the fighters are and to some extent how ludicrous the whole thing is. Expendable people sent to be cannon fodder so “important people” far away can say they are doing a good job protecting their people. 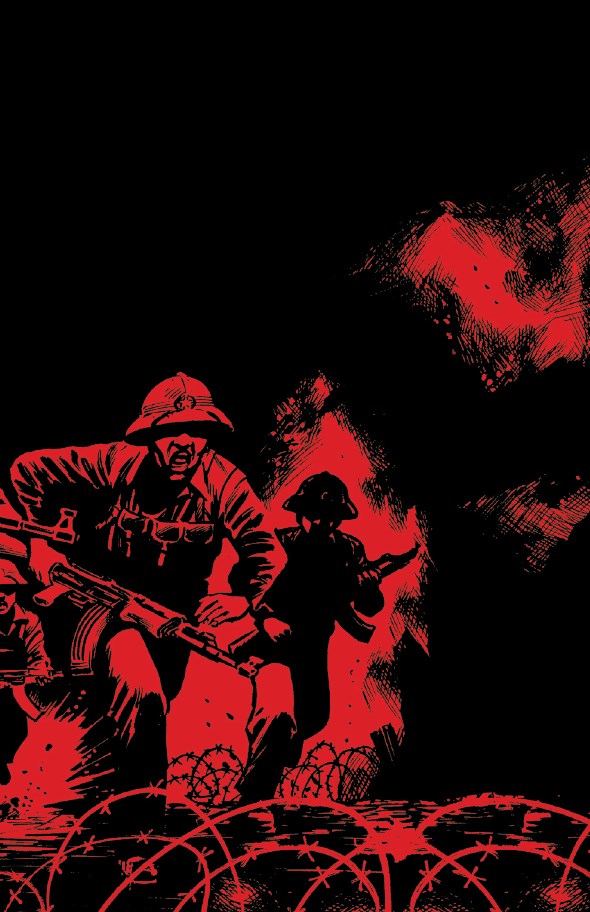 As much as the dialogues both internal and external drill home the horrors of war, Cameron’s explicit images do just as much justice to conveying the terror that awaited those sent to fight. We see not only the death and destruction in the landscape and the people who have already died for their cause, but we see the war within the mind of the soldier… the battle to maintain sanity or at least to survive despite it all. As with many of the great comic artists I find the real power comes from the facial expressions… when subtle emotions can be conveyed and to do that requires a great skill with the pen, pencil, tablet. Cameron has conveyed these characters with a real sense of visible fear and uncertainty, you almost want to reach out and help them but not only can you not because it’s only a drawing (and not an Ah Ha music video) but because you’ve seen what else is on those pages and you don’t want to step into that world. That sense of danger, tension and despair that follows the characters through each panel is a great window into the horrors of war and is hopefully enough to take the shine of any former or subsequent glorification of war. 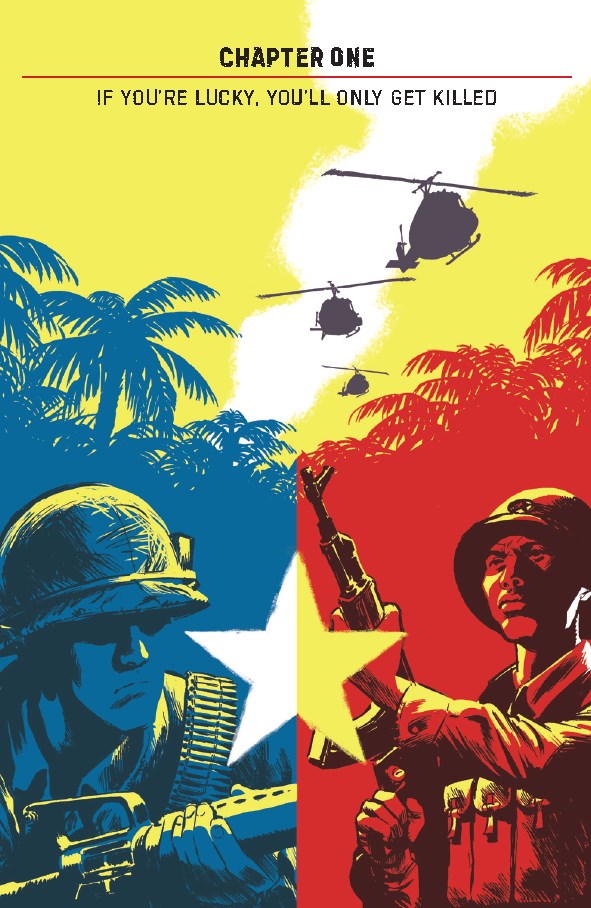 Having Dale Dye write the forward is almost as telling as the story itself. A man who has been there and done that and has a pretty unique perspective on it all, understanding that war is both a horror and unfortunately given our still arguably tribal ways, somewhat a certainty. It would be lovely to think that this book could help steer people away from war mongering… but I fear it will only reaffirm that belief in the readers who pick it up and those in power will continue to use people as mere pawns… lives throw to the wolves for the sake of nations claiming superiority over each other rather than working together for the betterment of us all. 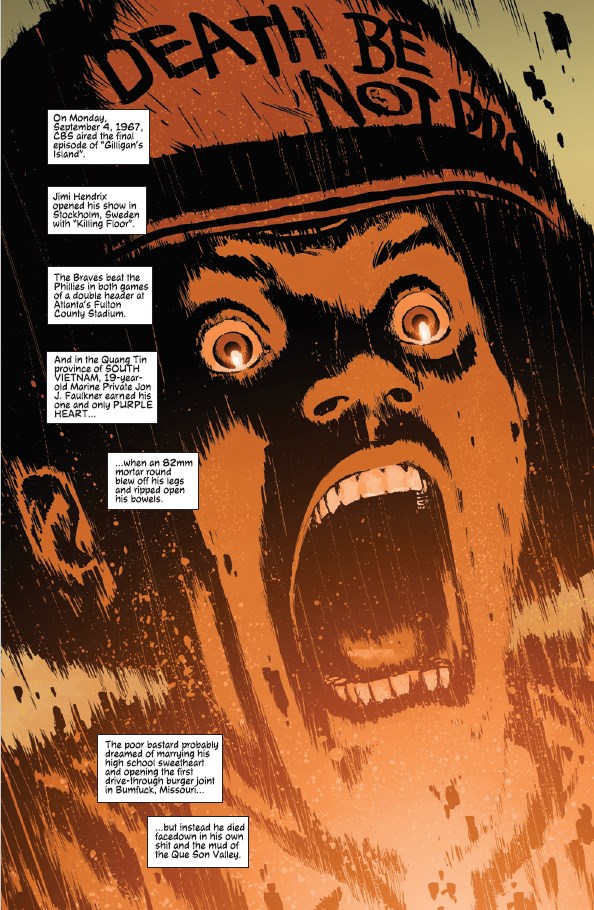