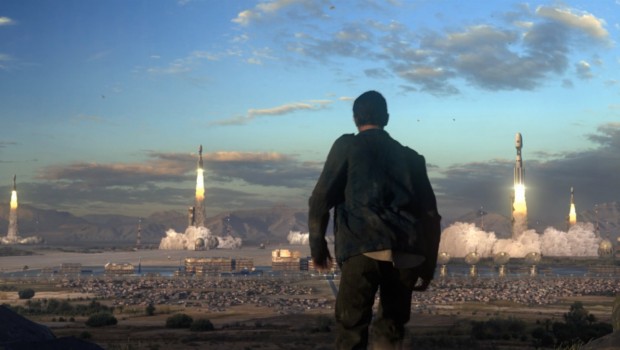 Summary: Aims for the stars and reaches them

It would be easy to call Civilization: Beyond Earth a simple science fiction re-skin of Civilization V. What mechanics aren’t identical appear to be a straight swap—gold becomes energy, happiness becomes health, barbarians become aliens. But it would be disingenuous to make such a claim. Beyond Earth is more than just Civilization in space. It’s about us—humanity—and what the future might hold.

The opening cinematic is wonderfully poignant. A lone jeep drives through a desolate tent city toward towering spaceships. Crowds clamour for the opportunity to flee the presumably dying Earth and take to the stars. A man and his daughter are scanned; only she is accepted. People of various races and religions board, and then the ships launch. The last we see of Earth is the father scrambling up a hill to watch his daughter fly away. His face shows no sadness. Only hope. 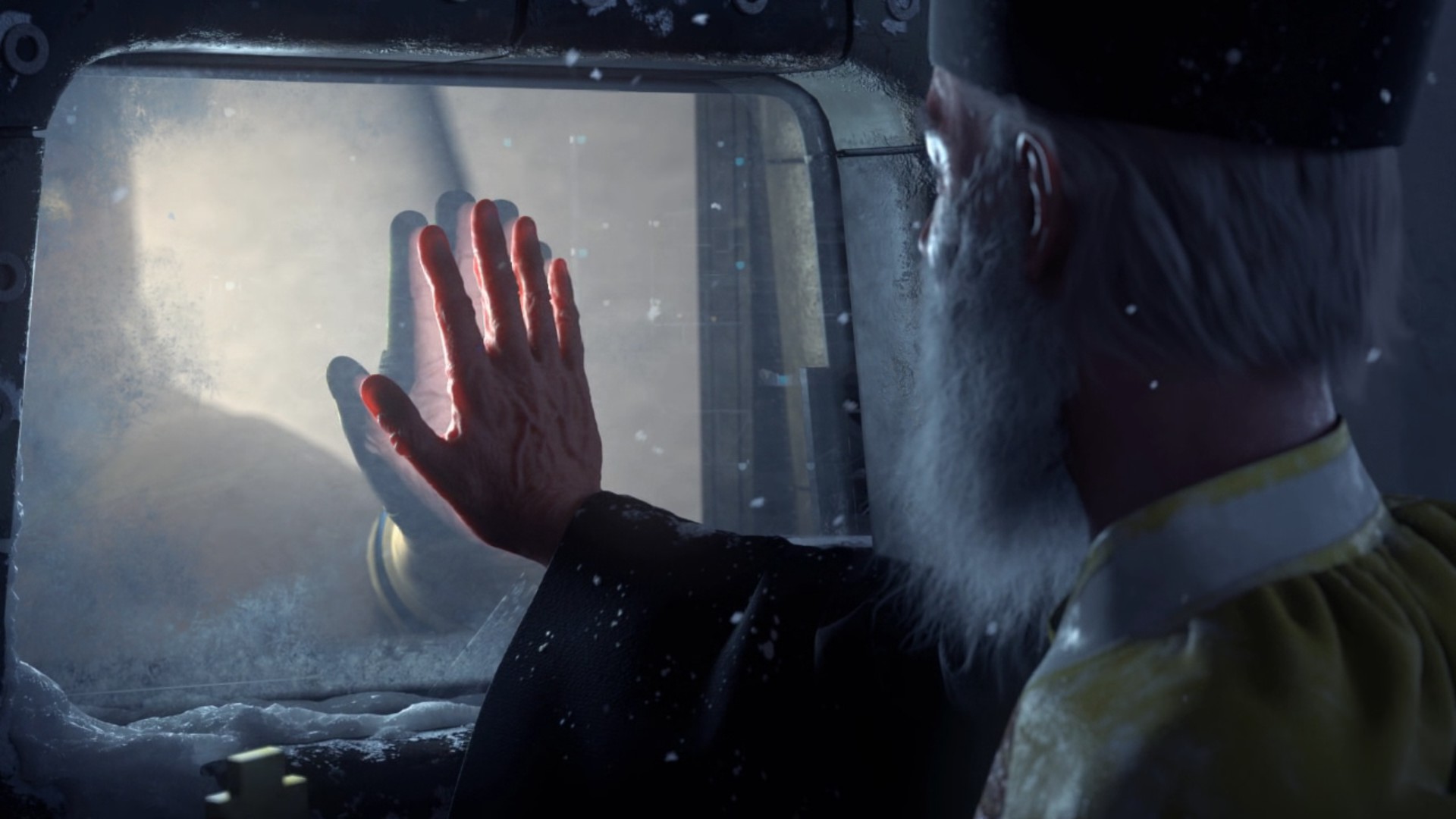 Civilization V was a race. Each civilisation bumbled through awkwardly revisionist history with a strangely staggered technology tree until somebody won. Because progression was mostly linear, it was easy to tell which nations were a threat and which nations were closest to victory. Civilization: Beyond Earth is a scavenger hunt and each colony is looking for something different. The technology tree has been replaced with a technology web, expanding outwards with increasingly complex concepts. The tree analogy remains: the web is comprised of branches, which are broad or core scientific ideas, and leaves, which are more specific offshoots of the branch. Deciding the next scientific pursuit is situational; sometimes a unit from a distant branch is needed and sometimes and building from an overlooked leaf is required. Beyond Earth will make you frequently adjust your approach.

Part of the reason for this is the new affinity system. Colonies develop along three tracks: Harmony, where humans splice their own DNA with that of the alien population in order to survive; Purity, where humans try to re-create Earth as a second chance at avoiding past mistakes; and Supremacy, where humans use cybernetics to enhance themselves. These are not simple choices—points in each affinity are awarded as the result of different research paths and quest choices. Each of these also has its own victory. Making a beeline for the necessary technology to enact this victory is almost essential on harder difficulties—I had victory snatched from me multiple times because I tarried on non-optimal technology just a little longer than I should have. 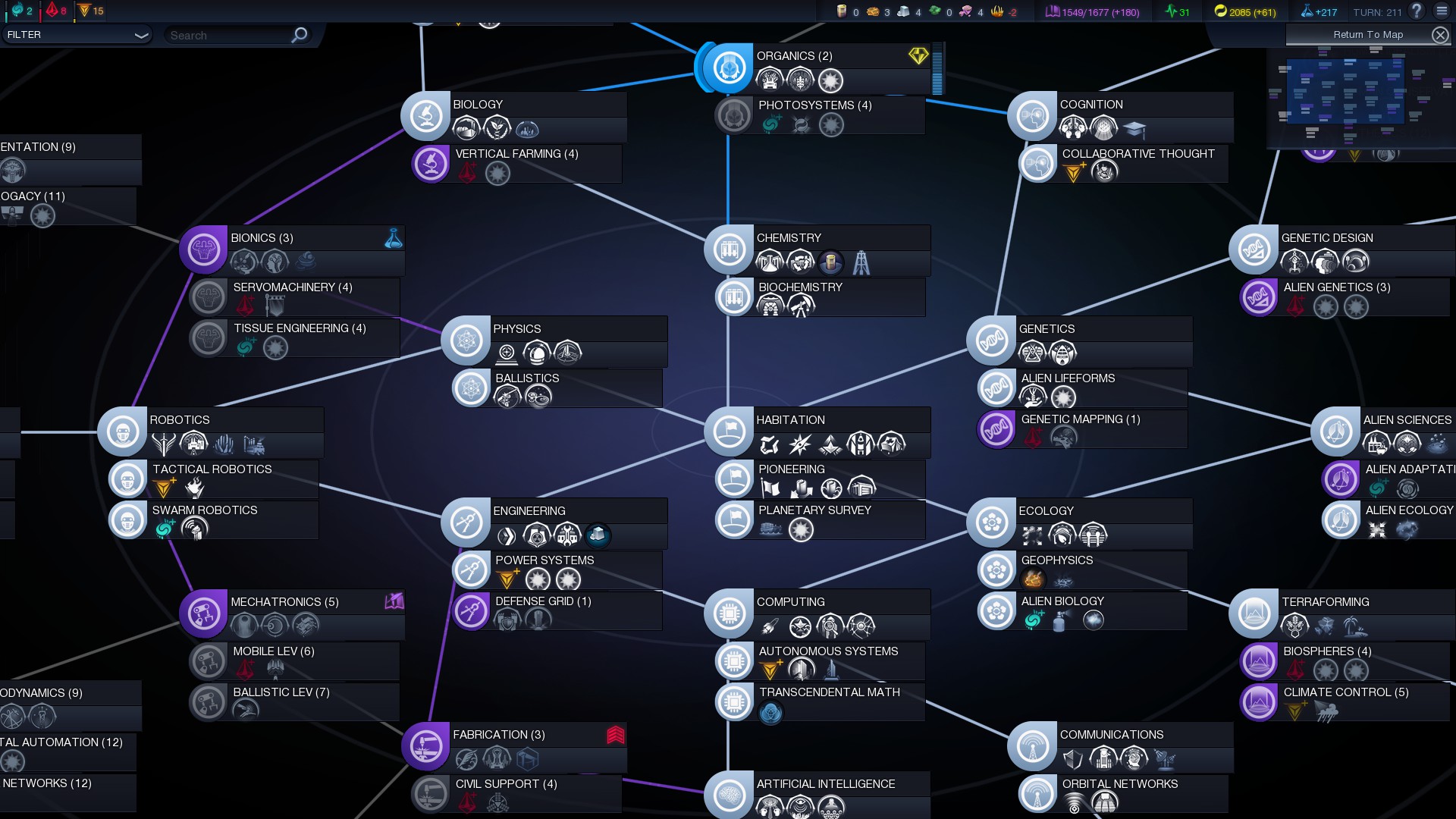 But perhaps the most interesting aspect of affinities is how they continue the thematic questions. What defines ‘humanity’? How can we, as a species, avoid making ‘The Great Mistake’ a second time? Each of the colonies will approach life on this new planet differently, and their affinity affects their leader’s appearance. Affinity also affects the way other colonies interact and view each other. Purists, Supremacists, or even just colonies killing too many aliens will attract the ire of Harmonists. Even though humanity has apparently outgrown discrimination based on race and religion, it still can’t help but seek division.

And nothing makes that clearer than the victories. Or, more accurately, what happens if the player doesn’t win. Cities lie ruined, devastated by whoever met their victory condition. What was supposed to be the salvation of all humanity ended up serving only a single group’s interests. Even the ‘One More Turn’ option is greyed out; defeat is absolute. 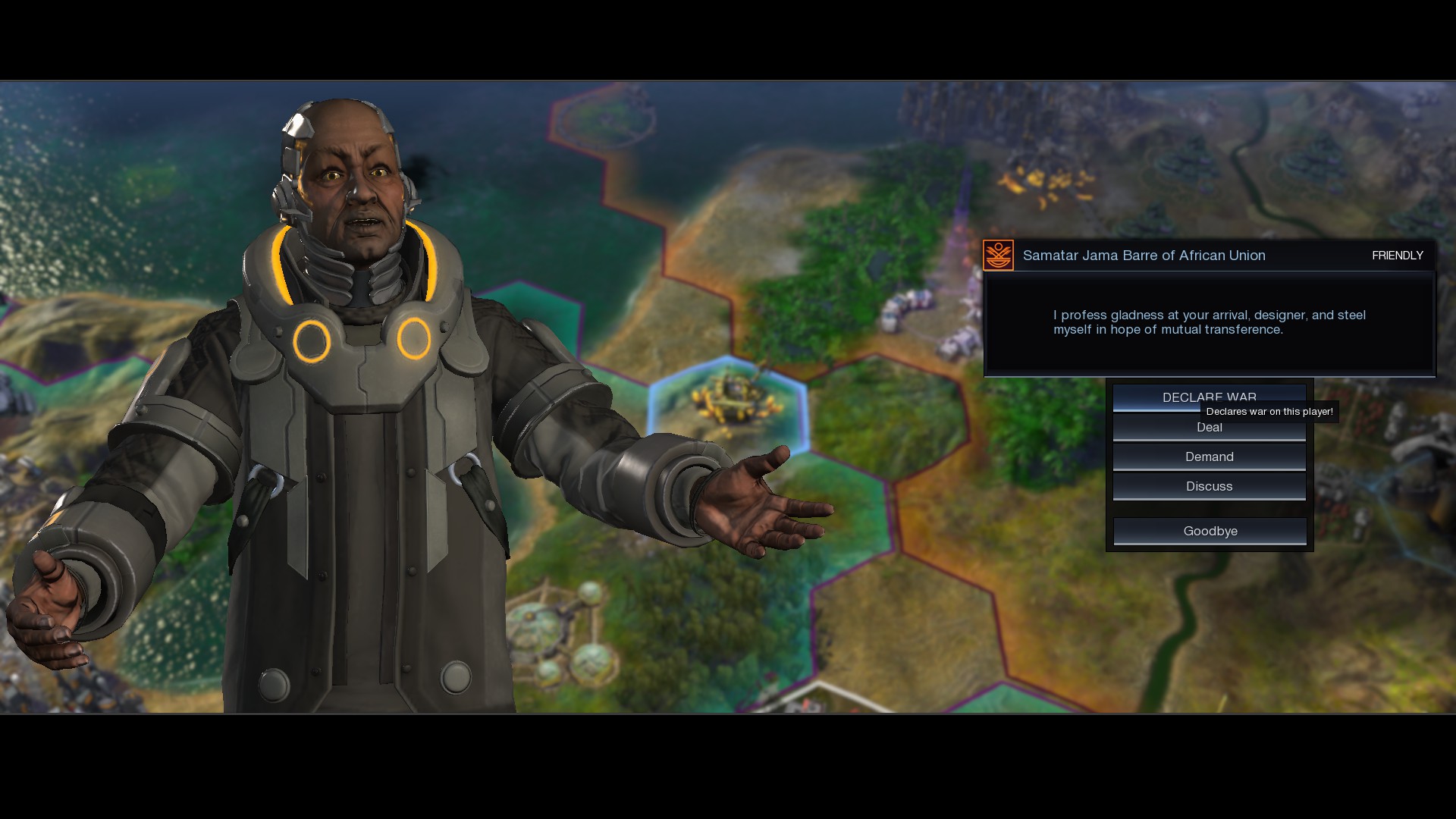 Beyond Earth succeeds at keeping its gameplay and context consistent. The Great Mistake, the catalyst for humanity’s extra-terrestrial journey, is implied to be some kind of environmental disaster. As such, even the Purity affinity is concerned with keeping natural resources sustainable so as not to repeat the errors of the past. Familiar Civilization resources exist but come at a detriment to colony health. The same applies to traditional manufactories; though the production bonus is large, the environmental and health cost might not be worth it.

These environmental concerns feed into quests. With city states being replaced by the far-less-involved stations, quests come primarily from colony concerns. After building a petrochemical plant, I had to choose whether to give petroleum access to citizens (for a culture bonus) or industry (for a production bonus). Humanity knows overuse of resources forced them to this hostile planet; conservation is the only way to proceed. Every building has one of these choices attached, meaning colonies can develop differently every game. 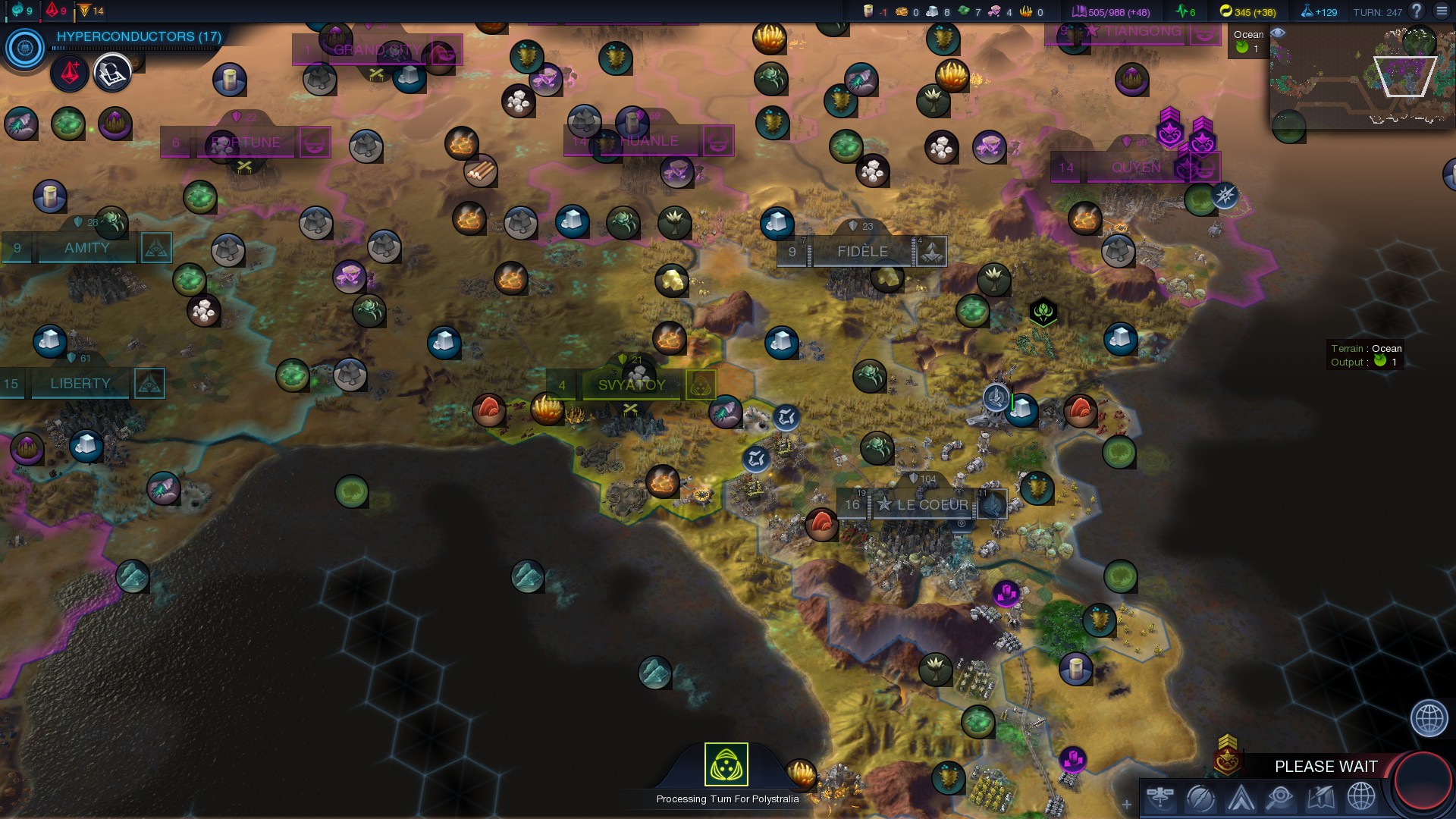 Beyond Earth still has some rough patches. On a few occasions, leaders proposed a trade and then rejected it, complaining that my offer was not good enough. And while variable affinities means that opposing leaders behave differently each game, having only eight factions to choose from feels a little underpopulated. Civilization V, for contrast, had 43 civilisations to choose from by the last expansion. But with nearly every Earth continent represented in the current roster, it’s hard to imagine many more additions—which means 12-player maps will invariably have repeated factions. Thankfully, Civilization games have a healthy modding community.

The aliens are also somewhat disappointing. Immediately after planetfall, the new world and its inhabitants are a threat: aliens will swarm and murder units, assuming the miasma doesn’t poison them to death first. But as colonies develop, they research new ways to handle the planet’s dangers—immunity to miasma, stronger troops to destroy aliens, and so on. This makes sense and is wonderful… except that aliens end up becoming redundant or negligible by the later stages. It would be nice to see aliens become pro-active in the face of extinction, and ‘remember’ which colonies threaten their existence. Harmony’s Transcendence victory even requires the colony to tap into a planetary telepathic link; surely this link could  justify aliens going on the offensive to protect themselves. 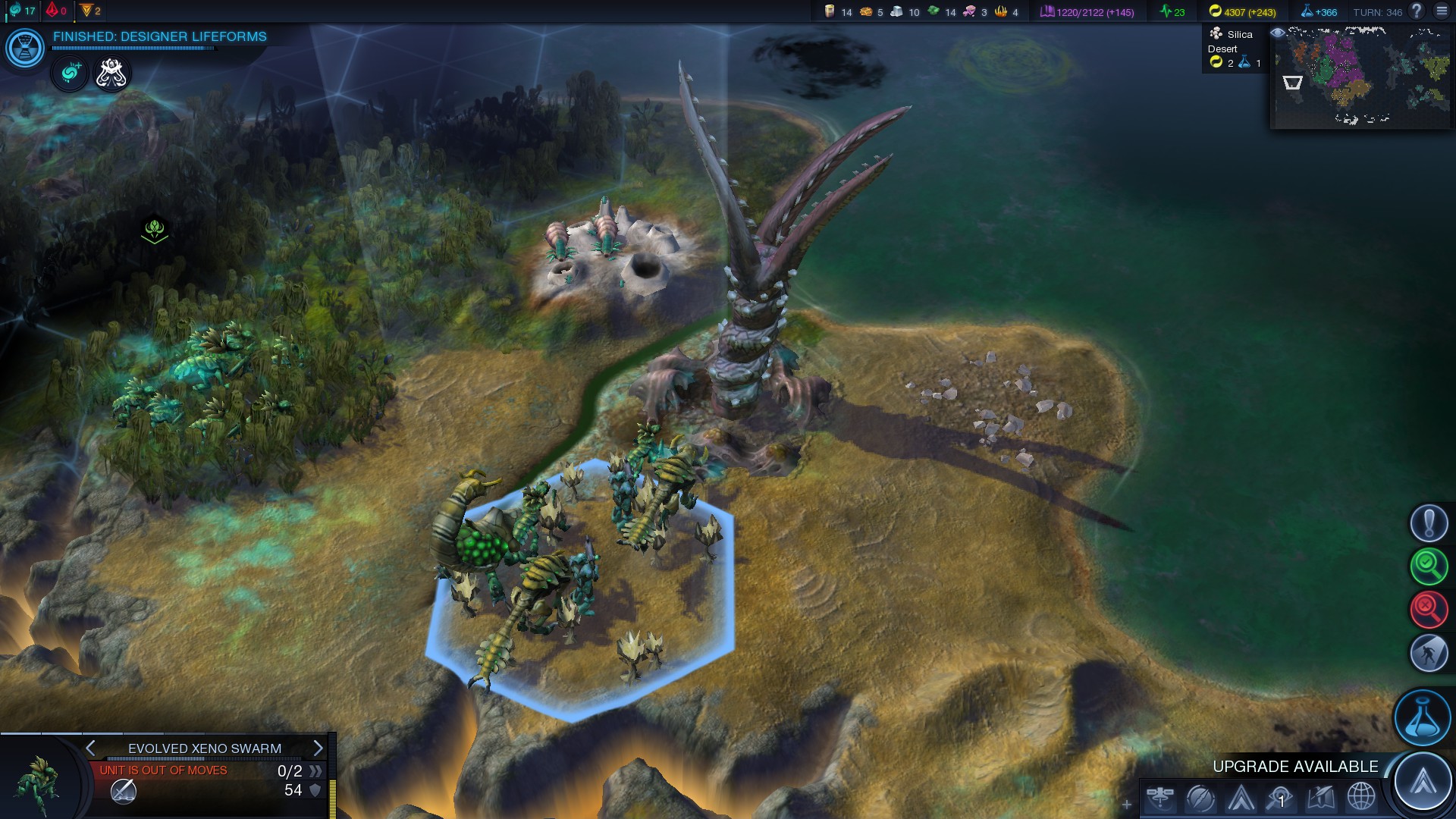 But in the end, it’s not about the aliens. It’s about humanity. It’s about the choices we make, choices that define who we are and what our new world will become. And these important introspective questions and lessons are wrapped up in one (inter)stellar strategy game.