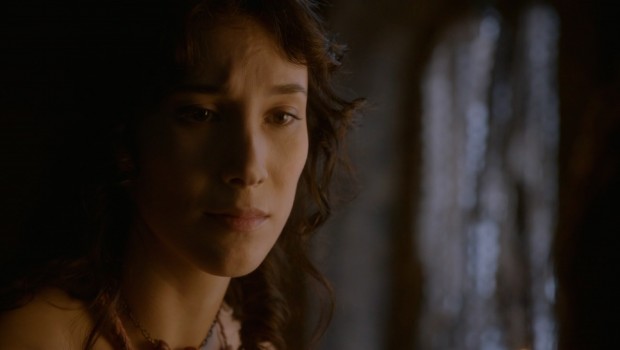 Where was Shae at the end of season three?

I have to think back now, where was she? [laughs] Oh yeah! Tyrion wanted to ship her away. But he was not that courageous by himself, to tell her, so he sent Lord Varys to her and he said, ‘Here are diamonds. You can have them if you just leave.’ That was the end.

Where do we find her in season four?

What I can say is she has to fight for her position and for her love.

Do you think she loves Tyrion?

Yes. The beginning, for her, was, ‘What can I get for this? You have me, so what will I get from you?’ It was a job, but she really fell in love with him, because at the end of the war in the second season, he didn’t have anything, and she said, ‘No, I’m staying here with you. If you don’t come with me to the Pentos, and leave King’s Landing, I will stay with you.’

There are two sorts of actors. One sort are really egocentric and vain – it’s like they don’t react or listen to you, they’re just acting for themselves. Peter is one of the other sort of actors, who really act with you. He listens to you, and really reacts to how you act. I’m grateful that I have most of my scenes with him.

Do you get on well with him offset?

Peter is really nice. I love his humour. He’s constantly focused on his lines, and he never stays around – he’s not in the way of the team. He’s somewhere sitting on his chair, and of course he’s chatting with you, or sometimes not. He’s not funny like he jokes all the time and needs attention. He’s intelligent, like really intelligent. I love to talk with him. I wish I could understand more English. When you start to talk with each other, the American guys are really fast, and you’re like, ‘What was that?’ [laughs]

You’ve worked with some other big names on the show, like Charles Dance. Is there a good spirit of camaraderie amongst the cast?

Yeah, there is. It’s a great group of people. We also had some scenes with the whole group. For example in the third season, with the wedding of Tyrion and Sansa, I met Charles Dance, and the other actors. I like Charles; he’s a gentleman and a wonderful actor. He’s such a presence on screen. Wonderful.

Have you seen the Red Wedding reaction videos?

Yeah! (Laughs). I think it’s so funny, but I was shocked too. I was like, ‘No, it’s a dream!’ Like in Dallas, when Bobby came back, and it was ridiculous, it was just a dream. I was shocked, even though I knew the storyline. Even though I read the script, I was really shocked. That’s the thing on this show: no one is safe.

Do you think season four has big moments to rival the Red Wedding episode?

From the beginning, I had the feeling that the show is growing and growing, getting more bloody, more fights and more love, from season to season. I think it will keep going that way. And yes, there are some amazing things happening in season four. You have to watch! Don’t look away because it will shock you and you won’t believe it! [laughs]

Did you know anything about Game of Thrones before you were cast?

Nothing at all. I was one of the first. My audition was in June 2010, and they started to shoot the first season, I think, in July or August that year. So of course no one knew about the Game of Thrones series, because it was all new. With the books, they said to me it was a best seller in the States. I said, ‘I don’t know about it. I don’t read that kind of fantasy book, so maybe it’s my fault,’ but I asked in Germany before the show, but people didn’t know about the book. I knew nothing! It was like, ‘Let’s see what will come, what will happen to this series.’

Have you read the books since?

No, because I didn’t want to get influenced by the books. They told me maybe they would change some things, and then said they wanted to make the part a bit bigger, and they did, so I just wanted to create my own Shae.

What do you think of Shae?

I really love her. She’s loyal and strong and funny, and she’s really intelligent. She’s not afraid to say to your face what she thinks about you. Maybe you can call it naïve, but I think she’s just like, ‘Look, I’ve seen a lot in my life, so don’t lie to me, don’t play with me, I’m here and I’m honest.’ She’s not even interested in power, or all those bloody diamonds – she doesn’t need that.

How do you feel about the other female roles in the series?

It’s not like all the men are here, and all the girls and women are here. Even Cersei, she’s a strong character. The women are more intelligent – they work behind your back, they are not really official. They manipulate. Shae is saying to Tyrion, ‘Hey, you don’t have to be afraid of all of them, you are strong.’ It’s really well written. There are so many series or movies where the women are the cherry on top of the ice cream, and here you have the feeling that Dan and David love women, and George R.R. Martin too. I’m so grateful for that.

Have you met George?

Yes, I met George last year at the premiere in Los Angeles. I said, ‘Thank you,’ because Dan and David asked him if it’s okay if they have a Shae with an accent, and he watched the audition tape and said, ‘Okay.’ He was really well informed, because he said to me, ‘I know you’re fighting against honour killing for the women’s rights group Terre des Femmes,’ and I was very impressed that he knew. I said, ‘Please George, if you ever have it in your mind to kill Shae, don’t do it.’ He said, ‘I can’t promise that.’ David said, ‘Sibel, don’t worry, if you ever should die, we will write you in as a zombie.’ I said, ‘Yeah, thank you.’ (Laughs).

Would you like to know what happens in the end?

Who is your favourite character?

Tyrion. Tyrion is really intelligent and he is my favourite. And even though I hate Cersei, the character, of course, like the fans, I love to hate her. She’s also really manipulative, so I love to watch Lena (Headey) acting. And of course my little girl, Sansa, even though she is taller than me, Sophie [Turner], is great. And Michelle [Fairley], who played Catelyn who died at the Red Wedding, is also a really good actress.

Where do you film your strand?

In Ireland and in Dubrovnik. In summer time it’s full of tourists, but it’s one of the most beautiful cities I have ever seen. It’s so clean and beautiful. I have been many places, but Dubrovnik is really special.

Are the sets very impressive?

The first season, there were some toilets outside, and a small hall. I mean, it was big, but if you compare it to now – because of course the more the show gets successful, the more they grow – now we have two halls where we can shoot, and we now have bathrooms inside, not outside, so it’s getting better! (Laughs). Of course now the people know the show. If we have new characters in the show, or new team, they’re like, (gasps) ‘I’m in Game of Thrones!’ We couldn’t say that in the first season because we were the beginners, the starters. Now they’re like, ‘Tyrion! Lord Varys!’

Have you had much feedback from the fans?

I’m so afraid (laughs). I said to Dan and David, ‘Please don’t let me hurt Tyrion, because the fans could kill me.’ They love Tyrion. It’s like, ‘Who is doing good to him, and who is not?’ I think, ‘Oh my god, I can’t be bad to him because the fans will hate me!’ But in the HBO shows, and especially in this show, there are real women, not plastic surgery women – I don’t have anything against them, don’t get me wrong – but it’s like, ‘Okay, it’s a normal woman.’ That’s also the reason why I think women love the show. The women are not like little princesses. They are vulnerable, they are strong, they are hoping, they are happy, they are crying. There are some special fans. In Istanbul, I was at Taksim Place, and it was full of people, and one girl just ran up behind me and said, ‘Shae!’ It was so scary, and amazing at the same time. I blushed, I was like, ‘Okay, oh my god,’ it’s a really strange thing when people recognise you because of the show. That was last year.

Do people recognise you often?

Yeah, but even in Germany they’re like, ‘Are you the daughter of my neighbour? Because your face is familiar.’ It’s like, ‘I don’t want to tell you now. We don’t know each other.’

How would you describe Shae to somebody who has never seen the show?

Okay I have to call Shae a prostitute, of course, but she’s a really vulnerable and strong woman. She’s not afraid of anything, so she’s really honest and loyal – those two points are really important to me for Shae. She would never speak behind your back. If she’s got something to say she would say it to you. If she doesn’t like someone, she would never try to be friends. I love her.

How does it feel being part of such a popular show?

To get dressed, and the hair, and to become Shae is very special (laughs). I realised just after the second season, because I hadn’t seen the show the first two years, and I was like, ‘I’m in a show where the fans are going crazy!’

Did you binge on the seasons when you did watch it?

Absolutely. I was like, ‘Okay, I have to watch that now, because of the press.’ And the first season was over, and I was like, ‘The second season – where is it?!’ It was like a drug! (laughs) And now I’m waiting! I’m like, ‘Where is my fourth season?’