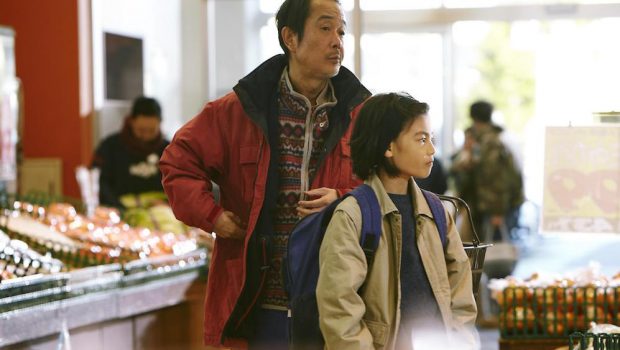 Shoplifters is a deeply humane Japanese film that trusts its audience to untangle its complex, interweaving relationships and the powerful dilemmas that follow. It has resonated with people across the world. In Japan, it was a box office hit, and in China too it made a sizeable return for an arthouse film. Its popularity was perhaps spurred by winning the Palme d’Or award at the Cannes Film Festival.

Its success is understandable while watching its convoluted but excellent backstory unfold. While set in contemporary Tokyo, its themes of poverty, survival and family are universally applicable. The major thematic question it seeks to address is ‘what is a family?’ The ambiguous resolution brilliantly deconstructs Hollywood clichés, such as blood being the defining trait for family bonds. Instead, family is redefined, reshaped and recognised through actions, intentions and flawed ethics.

The film’s director, Hirokazu Kore‑eda, was born in Tokyo and said he looked at the thematic question of family for ten years before developing the project. He has answered it with insight and humanity, which are both complemented by a social-realist shooting style that has drawn comparisons to the working-class films of British filmmaker Ken Loach.

It is important not to spoil the plot details of the family dynamics in Shoplifters. In simple terms, it is about an impoverished Japanese family living in one household that is so small they are almost forced to sleep on top of each other. 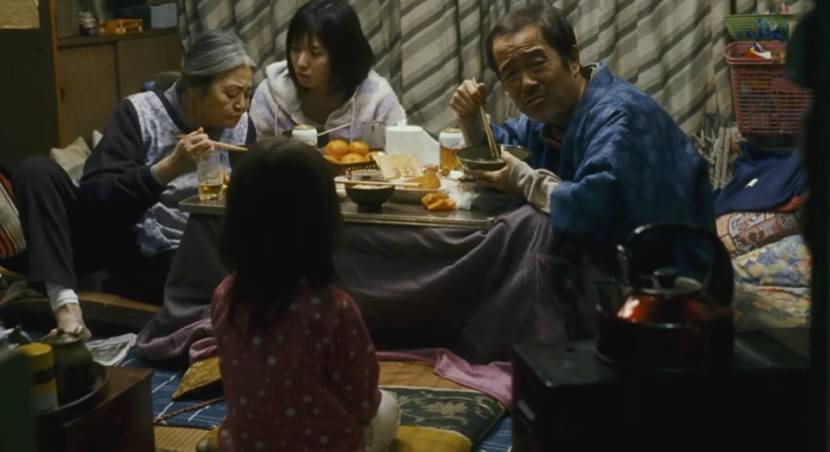 During the opening scene, a father named Osamu (Lily Franky) and his son, Shota (Kairi Jō), work together to steal groceries from a store. The theft seems justified by the impoverished nature of the family and their circumstances.

Osamu’s wife, Nobuyo Shibata (Sakura Ando), works at a laundry and pockets small items from people’s clothes to survive. Meanwhile, Aki (Mayu Matsuoka) is a sex worker who shares an unconventionally intimate relationship with a client.

The other person living in the household is the family’s grandmother, Hatsue Shibata (the late Kirin Kiki). She provides for the household through her pension.

Aside from a shortage of money, the most pressing issue for the family is the arrival of a tiny, young girl named Yuri (Miyu Sasaki). She has been left unsupervised so they take her home with them one evening for safety. However, they notice scarring on her arms and realise that she has come from an abusive place. 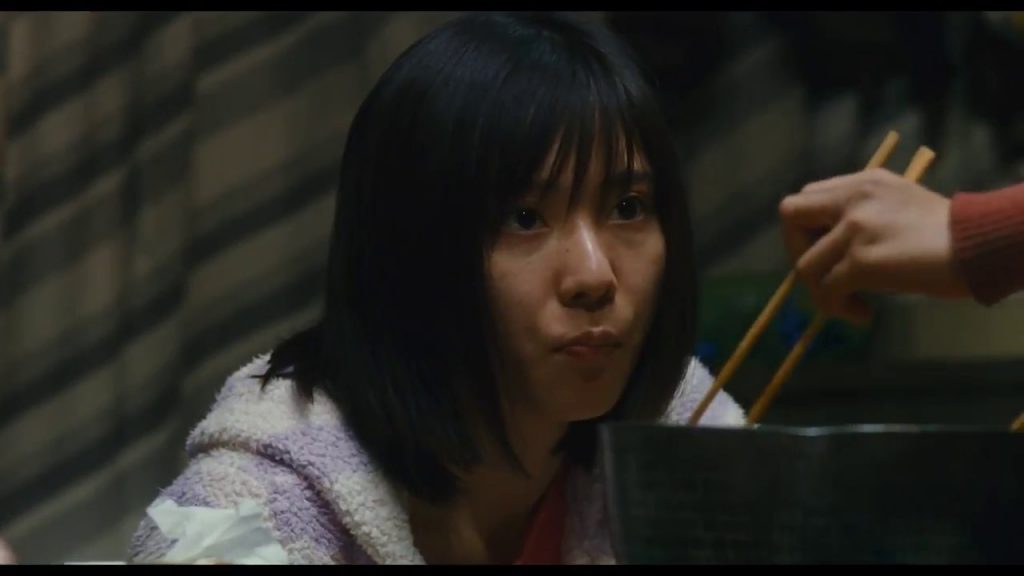 Yuri’s trauma determines their decision to keep her as their own. The family humorously dismisses claims of kidnapping by arguing there is no ransom money involved. Their financial woes are further compounded after Osamu breaks his leg while working on a construction site and fails to receive worker’s compensation.

The film brilliantly balances its authenticity with some of the most dramatically poignant scenes of any film this year. There are many standout moments, including Nobuyo telling Yuri that people who love her don’t hit her, a breathless scene where a bag of oranges spills onto the road, a trip to the beach where Hatsue looks at the family from a point-of-view shot and acknowledges her mortality, and Osamu hurriedly redressing before the children enter the house. It mounts an incredible combination of high drama and quiet character-building scenes that makes us care and understand each family member.

The deftness of Hirokazu Kore‑eda’s direction is evident in the way his style remains diligently sparse and unobtrusive. He allows us to observe the compact spatiality of the household from an intimate level that never pulls back entirely or becomes too obscure. Instead, we are challenged to judge the impoverished lifestyle and theft for ourselves.

The gentle shooting style amplifies the humanity, particularly in a scene where the unclothed bodies of Osamu and Nobuyo are openly filmed in naturalistic lighting. The unapologetic vision of their skin as they lie on the floor serves to quietly paint both characters as merely vulnerable people of flesh and blood.

Kore‑eda’s humanist shooting style allows us to adopt our own perception of the family and their choices, only for secrets and insights to challenge our understanding of who they are. It is crucial to the moral ambiguity that the story retains sympathy for them though.

For example, there is an unbroken medium close-up shot of Nobuyo at the end of the film where she tears up. In this moment, we fully understand her emotions and still feel for her as a person and for her choices. The empathy evokes a moving sense of injustice and tragedy. 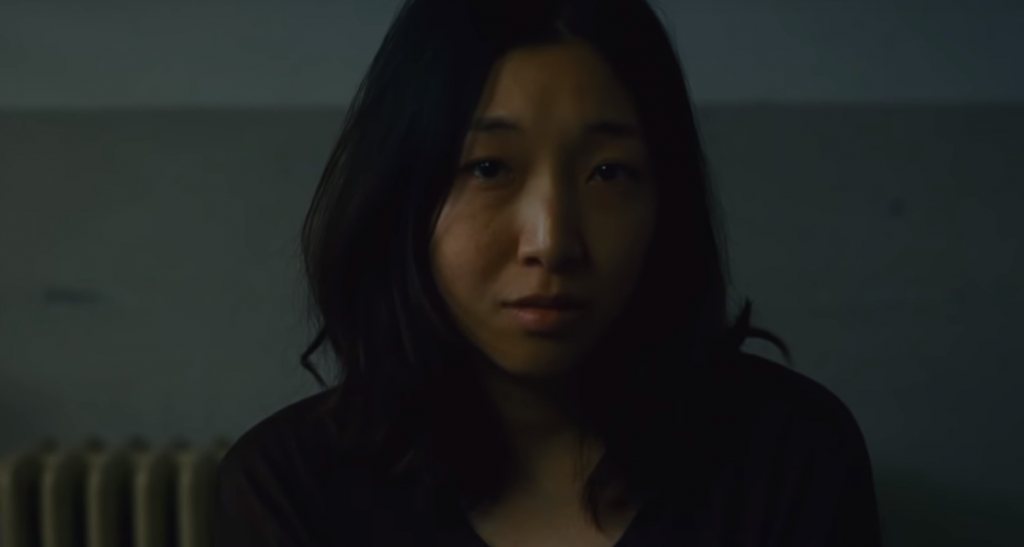 A major staple of the tragedy is the complexity of the moral dilemmas. Shoplifters effortlessly raises difficult questions about how people live their lives. Is a family purely connected by blood or by actions? Is it right to take a child away from an abusive home?

At one point, Nobuyo argues that ‘giving birth does not make you a mother’, which stresses her loving instincts to help Yuri. Is it wrong for the family to steal to survive? Are some of the family’s most significant actions only determined by money? 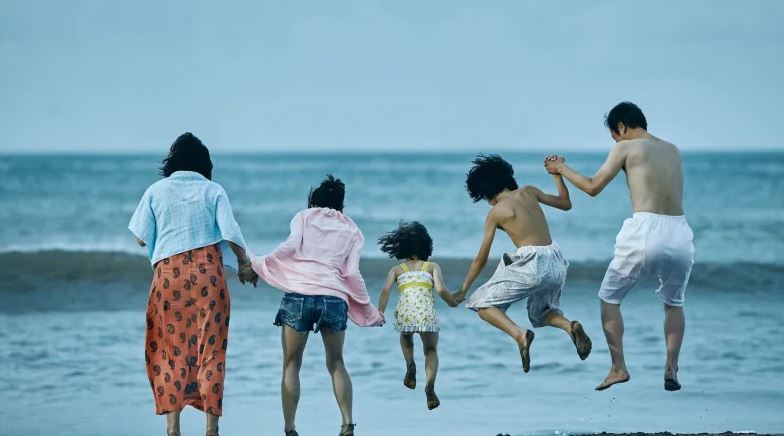 Untangling the web of the backstory is difficult but deeply affecting. This is evident in a devastating final quarter that hits hard and in unexpected ways. The revelations unveil a second thematic line, which is to explore how ordinary people are imprisoned by circumstances that force them into (objectively) immoral actions. The inevitability of the choices makes the dilemmas more troubling because there are few alternatives.

Despite their dubious decisions, we care about the family when they face unfair consequences and are judged by an intolerant modern society that fails to understand them. The power of the conflict and the drama is evident in the film’s touching final shot. It will not be spoilt except to say it is one of the saddest and most bitterly ironic last images in recent memory. It marks a strong end to an already poignant story that is memorably etched in humanity.

Summary: A deeply humane Japanese film that trusts its audience to untangle its complex, interweaving relationships and the powerful dilemmas that follow.