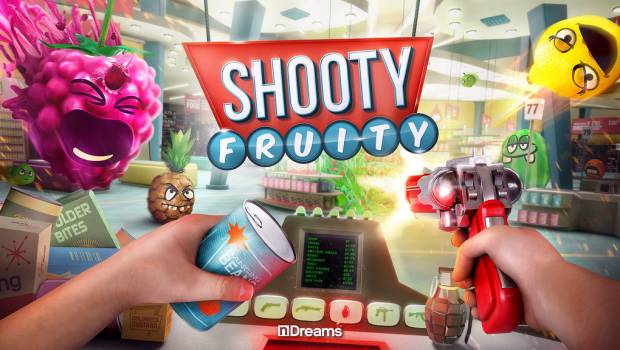 Summary: A charming concept marred by a lack of replayability, Shooty Fruity is definitely worth a look for discerning VR shooter enthusiasts but it may be worth waiting for a sale, particularly with so many lengthier titles making their way to the format.

The premise of Shooty Fruity sounds like the crack addled ramblings of that weird guy wearing a cape by the 7-11 that you cross the road to avoid every morning and, by all rights, shouldn’t come together as effortlessly as it does.

The breakdown goes a little something like this – You’re a supermarket cashier who must maintain the mundane duties of your menial labour position during the midst of a full scale attack upon humanity by ravenous, mutated fruit intent on taking up their new place atop the food chain. 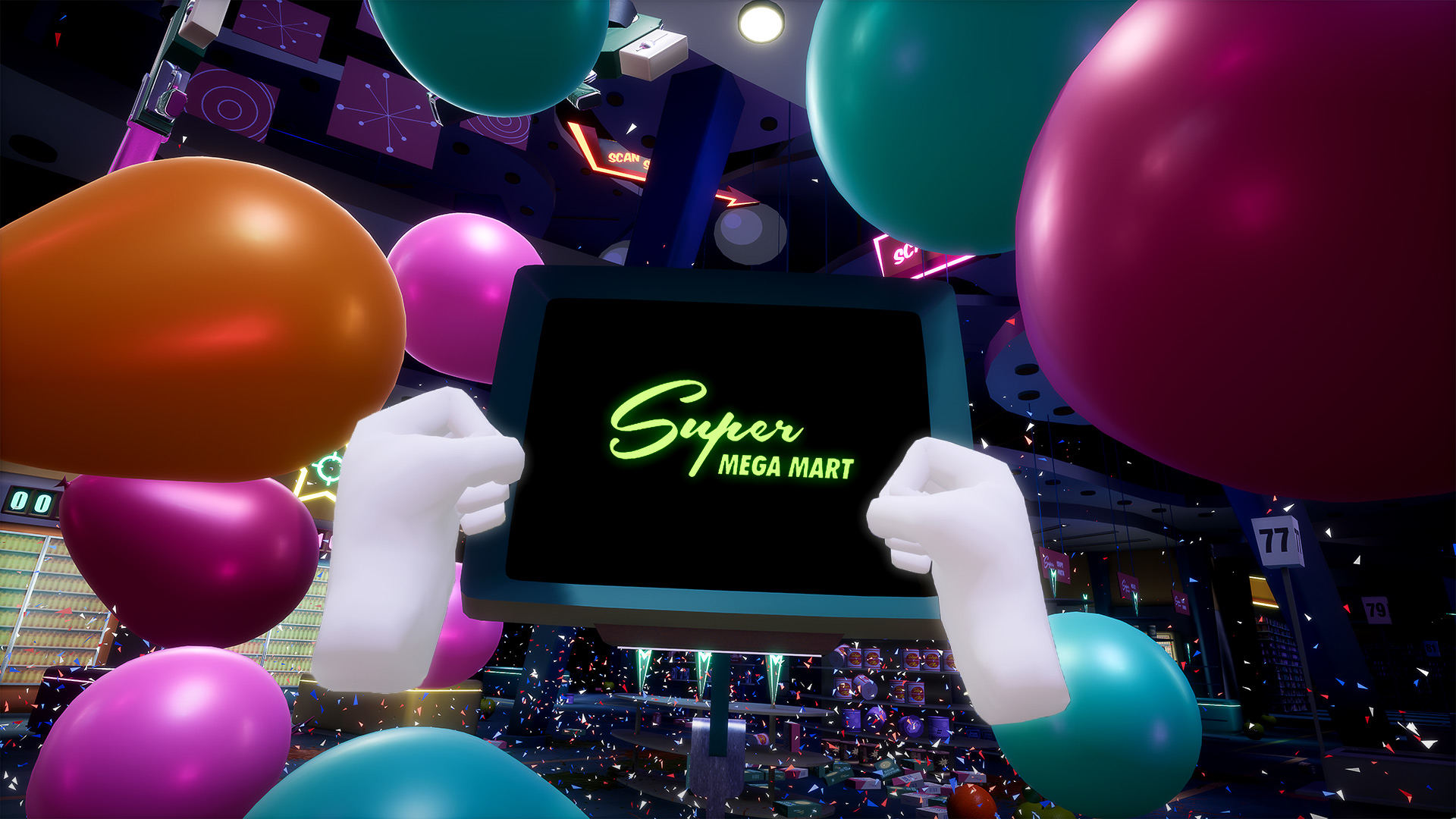 This means staving off the horde of attacking fructose filled foes whilst also scanning items and ensuring they’re place upon the correct conveyer belts, dishing up food for customers and bagging up purchases; although each of these tasks are fairly simplistic to perform, when you add in a veritable fruit salad of enemies into the mix then things get frantic fairly quickly. 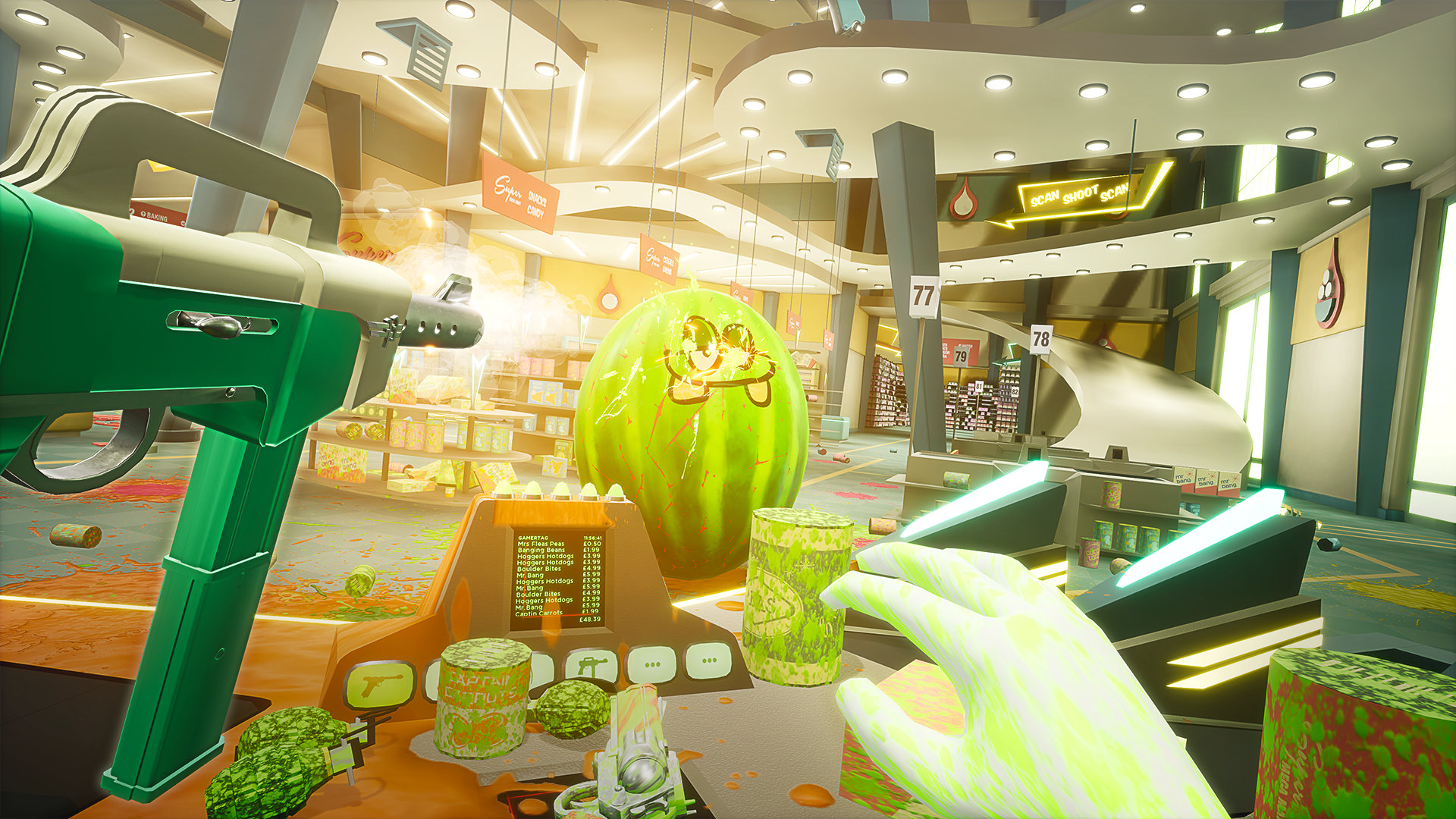 Completing these tasks successfully will add new weapons to the overhead rack from which you can access your arsenal during the heat of battle and you can even eventually earn permanent additions to your loadout, which help mitigate working through the earlier stages on subsequent playthroughs.

It’s a simple progression system, to be sure, but it’s one that keeps you motivated throughout and it’s fun experimenting with each new toy in order to discover which enemies they’re most effective against. 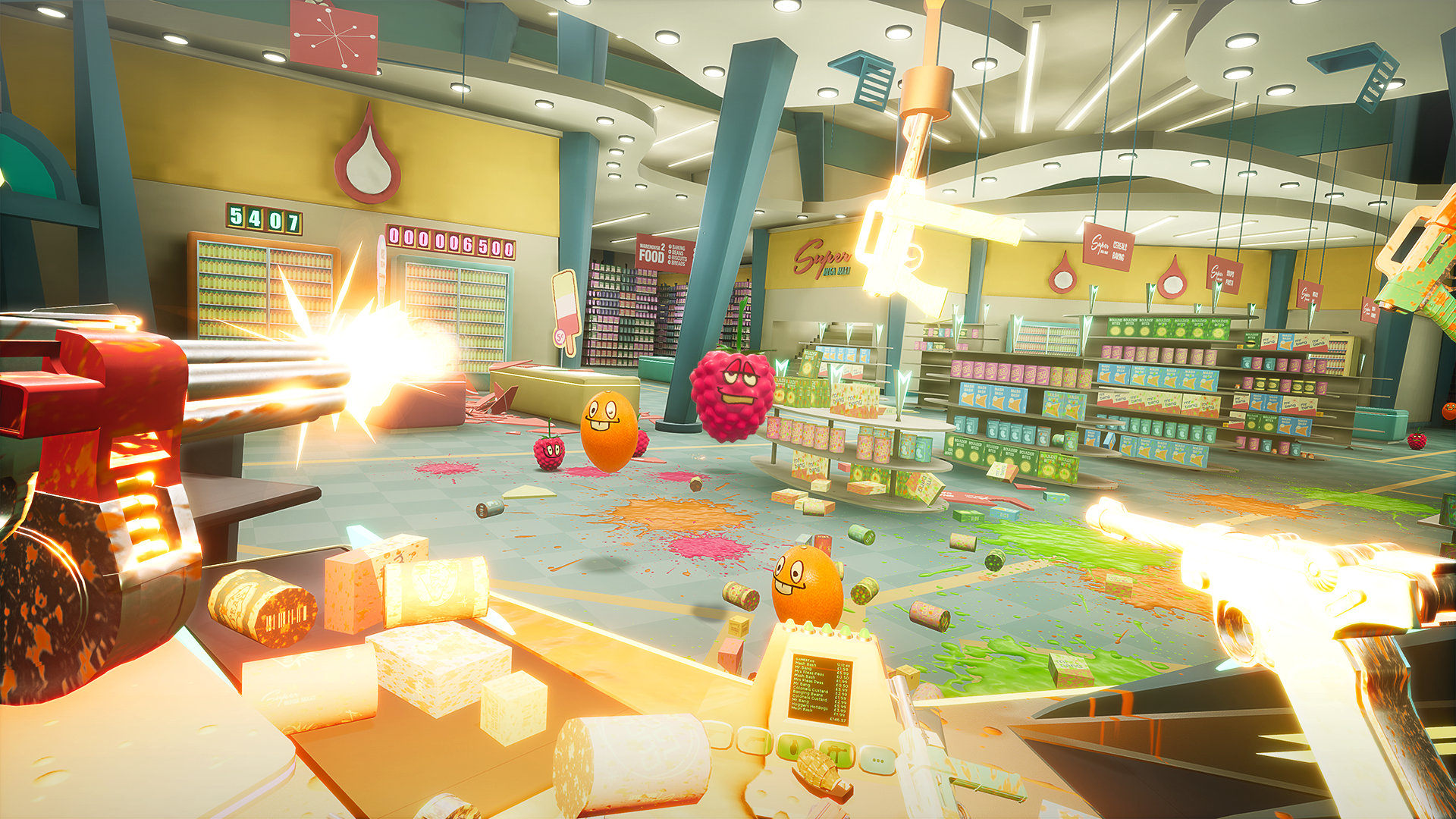 The enemy variety is fairly decent and, as mentioned above, you’ll have to switch up your loadout fairly frequently in order to exploit their different weaknesses. You’re eased into things with apples and cherries but soon you’ll be taking on spinning bananas, strawberries that fire seeds at you, blueberries that can move quickly and deal immense damage and much more.

Things can get overwhelming pretty quickly, particularly as you swap weapons whilst performing the task currently at hand, but managing the onslaught of fruity foes as the menial tasks become more and more complicated is a satisfying sensation when you finally pull it off. 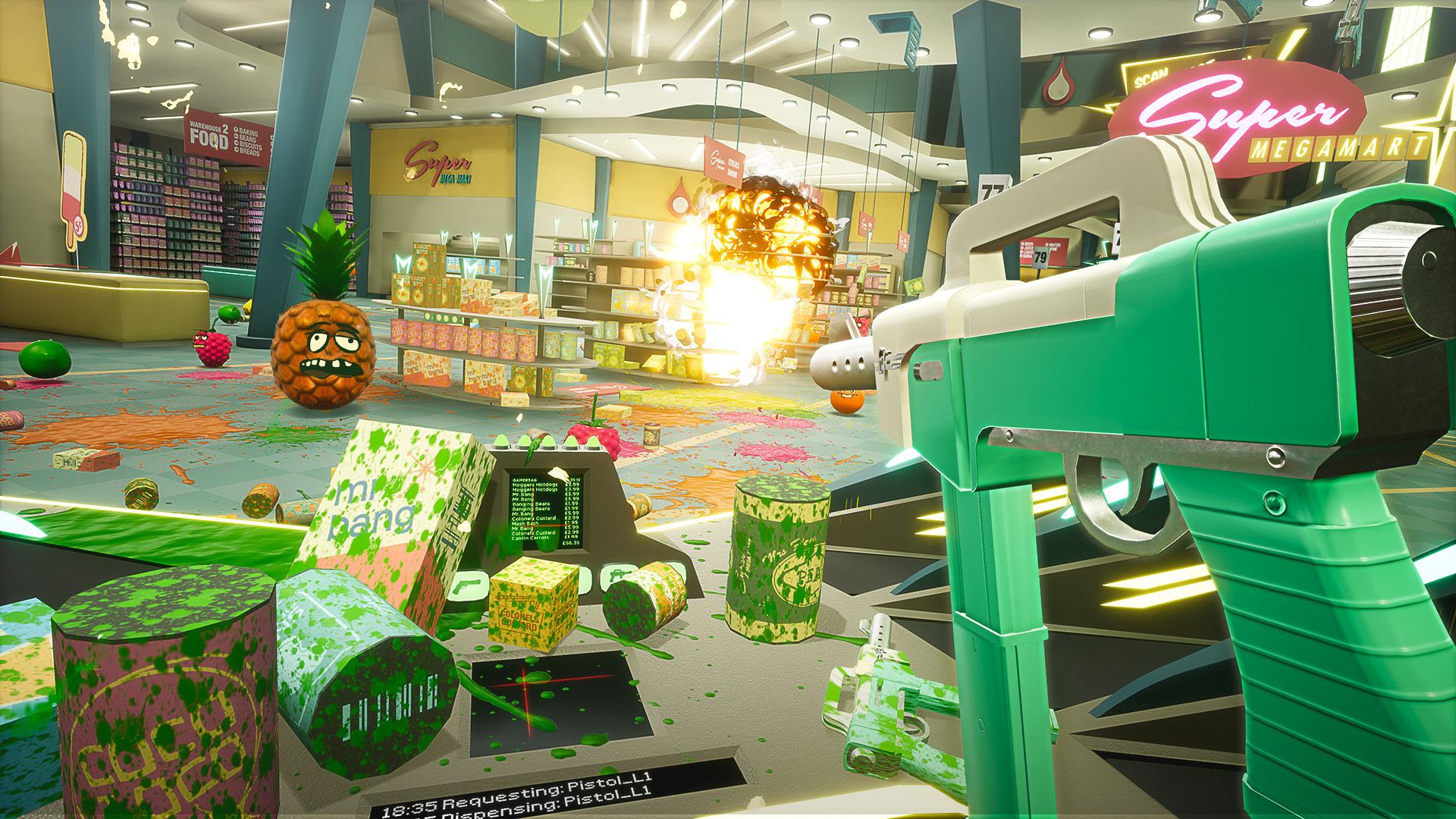 In terms of accuracy, although Shooty Fruity didn’t feel as tight as, say, Rush of Blood, I felt that a majority of my shots landed where I intended and the responsiveness was fairly solid throughout.

There were a few moments where the camera would, for lack of a better word, spazz out, but this comes with the territory with PSVR and its lack of 360 degree tracking and was more often than not due to me shifting position, which happened surprisingly often considering that Shooty Fruity is a fairly stationary experience. 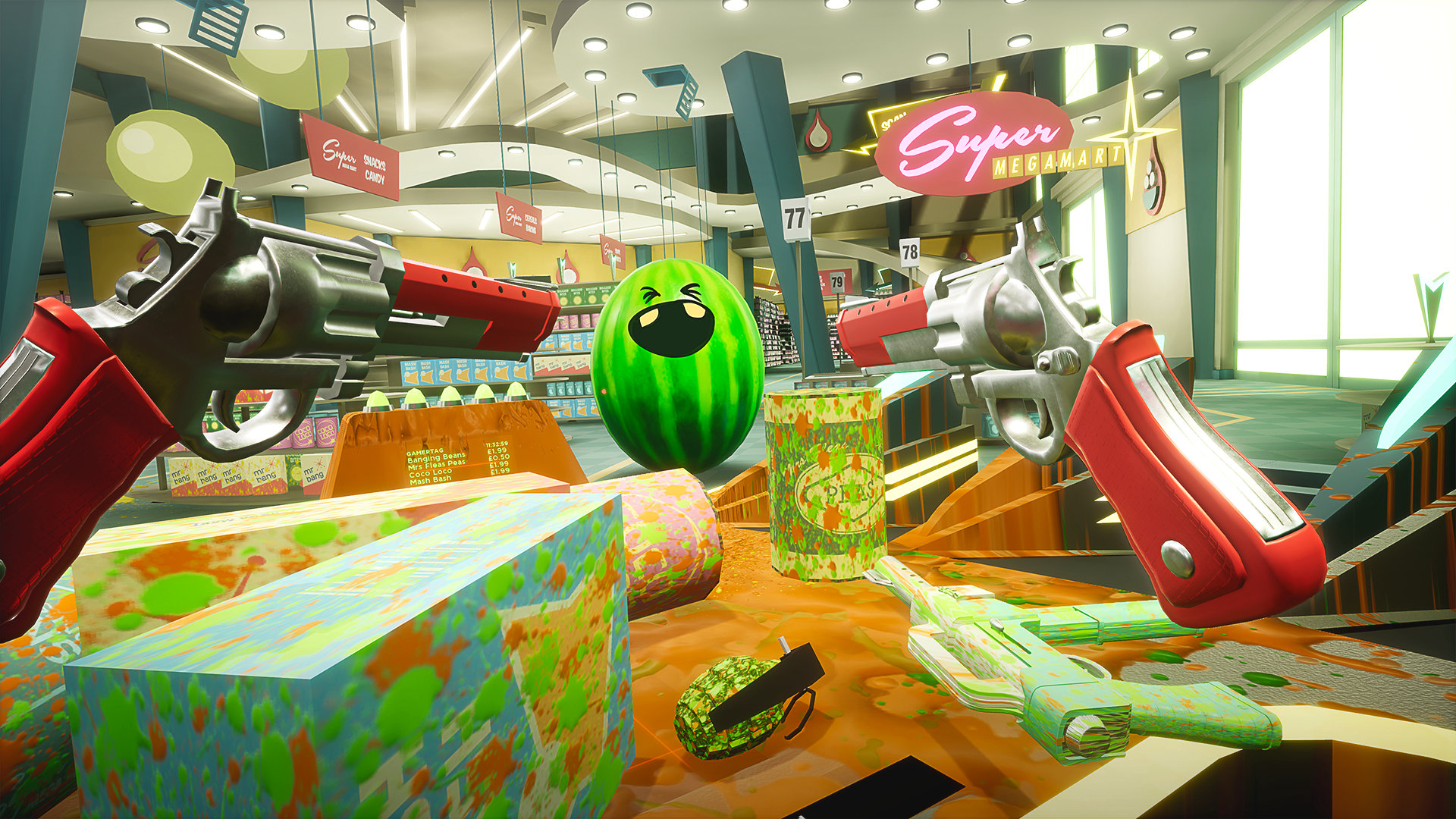 As you’d expect with a VR title, the graphics aren’t as detailed as traditional flatscreen games but the bright and colourful imagery more than holds up in much the same way that Job Simulator or Accounting Plus does. This stylised art direction works pretty well considering the ridiculous concept of the game and I don’t think my enjoyment would have been impacted for better or worse depending on whether or not I could make out the texture of orange peel.

The audio, whilst nothing special, is solid enough and helps sell the insanity that unfolds in front of you whilst also providing subtle audio cues to help determine which enemies are attacking. 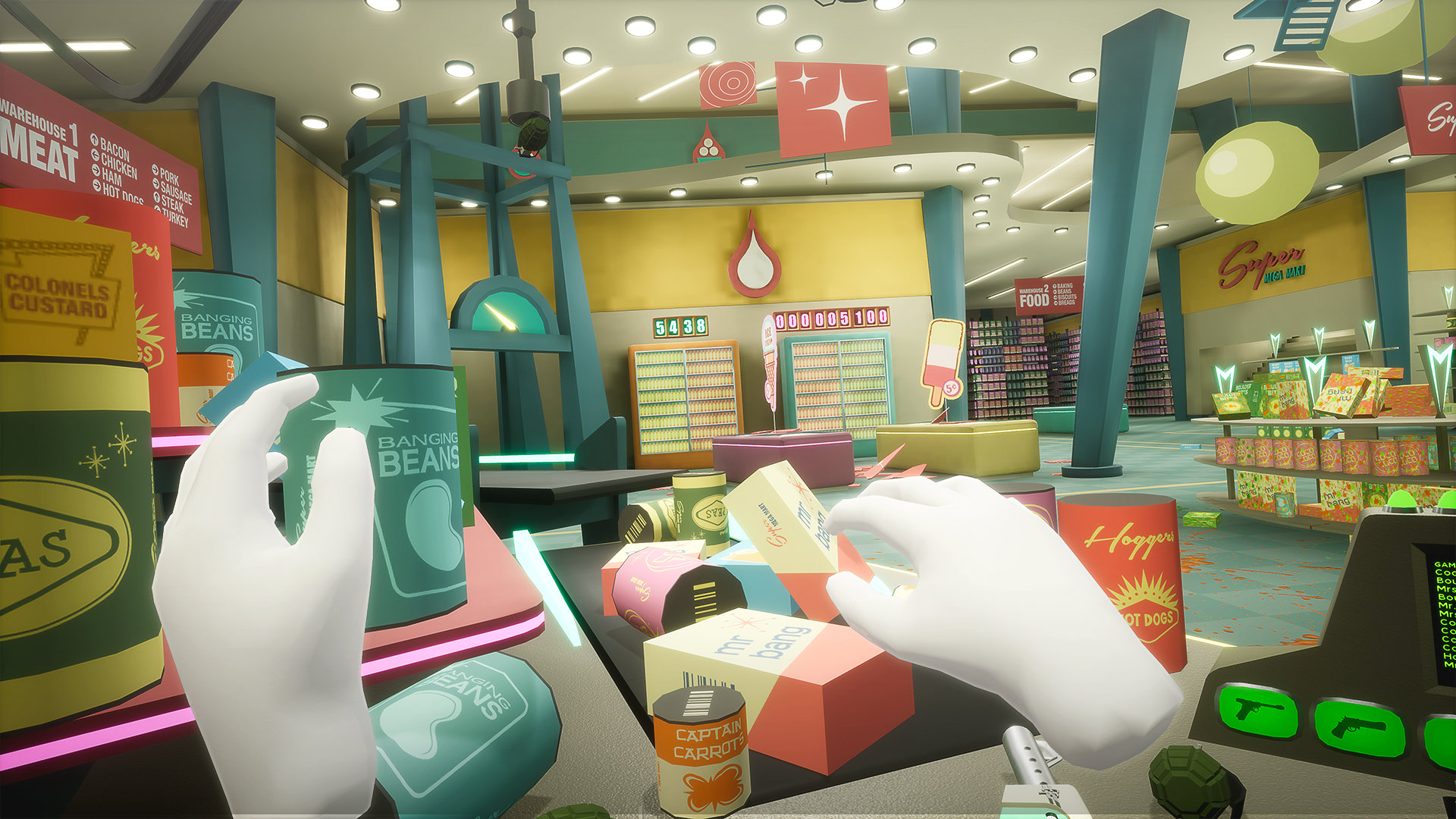 Shooty Fruity is a goofy little title that marries the mundane task formula of games like Job Simulator with an absurd shooting gallery. Don’t be fooled by the cutesy aesthetic, however, as the gunplay can get pretty intense at times and contending with your duties adds an extra dimension of difficulty.

To be honest, without the supermarket cashier gimmick Shooty Fruity would be nothing more than a slightly above average wave shooter, especially as it doesn’t really expand upon the mechanics of that genre in any real way, but the disparate pairing of shooting enemies whilst maintaining the operation of a supermarket works surprisingly well and elevates the game above less inspired contemporaries. 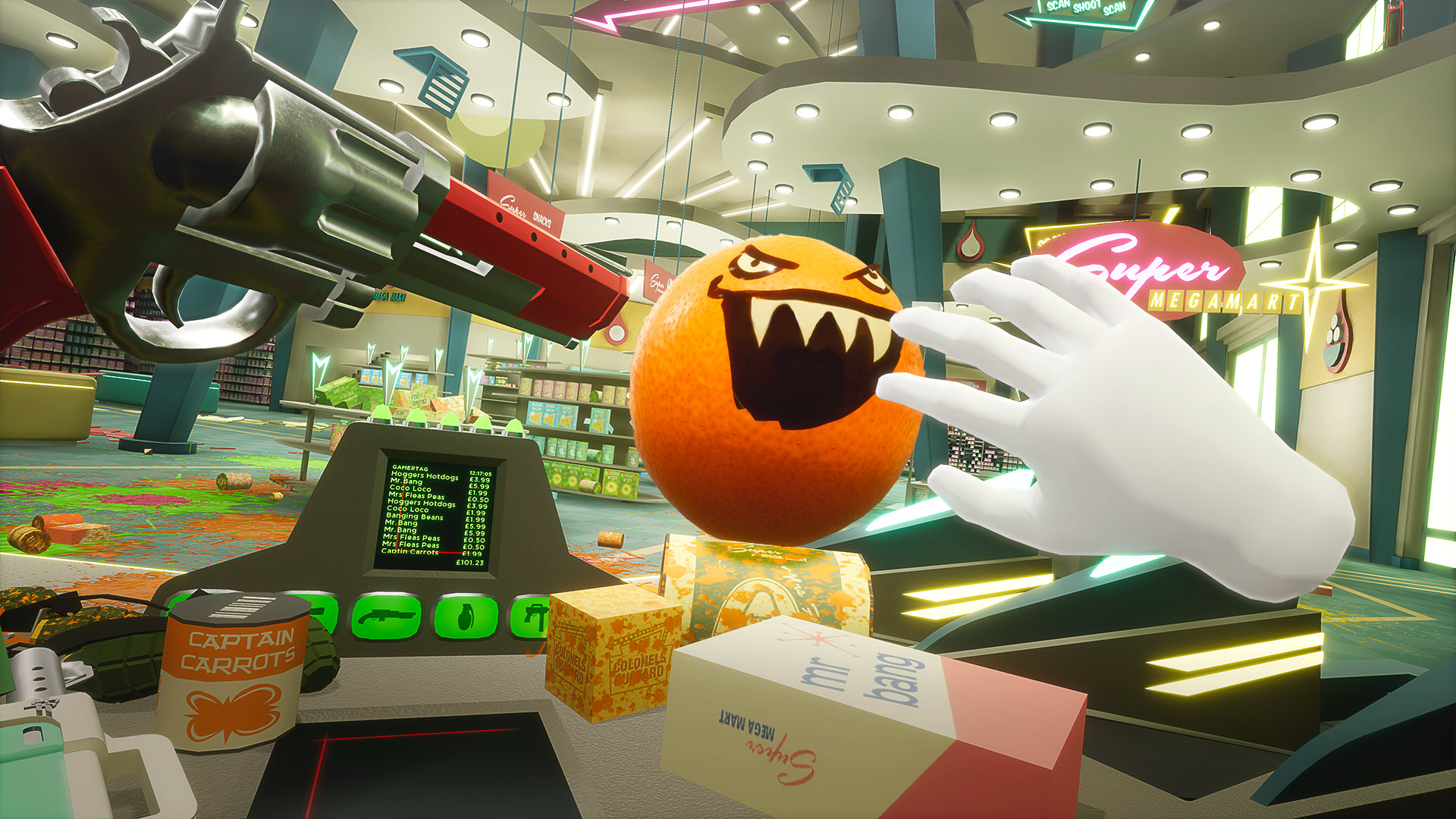 It’s not all sunshine and gumdrops, however, as the marathon challenges introduced later in the game tended to drag things out a little too much for my liking without adding any real incentive to keep playing; your first few times  will be a blast but once you smash the fructose forces to pulp there’s little reason to come back to the game, a problem that admittedly affects quite a few PSVR titles.

A charming concept marred by a lack of replayability, Shooty Fruity is definitely worth a look for discerning VR shooter enthusiasts but it may be worth waiting for a sale, particularly with so many lengthier titles making their way to the format. 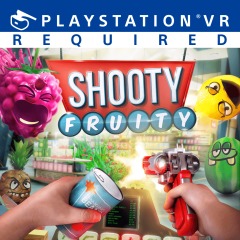