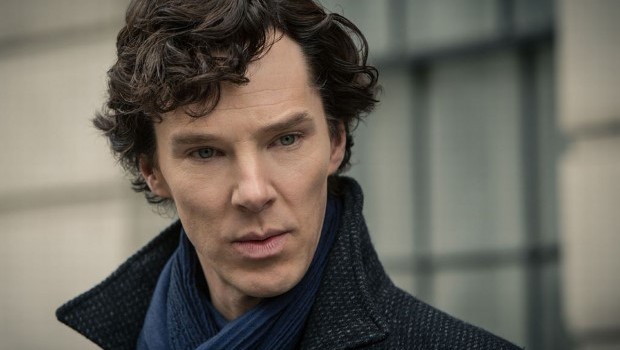 Summary: Sherlock the Complete 1st to 3rd Series is a perfect release on Blu-ray!

Sherlock Holmes has been one of the most durable, and adaptive, literary franchise in western literature.  Long after Poe’s detective August Dupin was consigned to the dustbin of history, Arthur Conan Doyle’s creation has endured.  Again and again, Holmes has proven his worth to a new generation of viewers and readers.  While the stories themselves were occasionally a humdrum examination of petty, domestic mysteries, Doyle’s creation himself always gripped the imagination.  A man who fashioned himself into an instrument purpose-built to solve mysteries, who didn’t suffer fools gladly and had a drug addiction that Doyle’s stand in Watson abhorred, Sherlock Holmes has become something of an exemplar of the single-minded pursuit.

Apart from the timeless allure of Victorian Britain, Doyle’s creations have enough spark, warmth and a sense of justice that they appeal more than a century later.  And the viewers keep watching.  The 1940s saw Basil Rathbone assume the role in films.  Jump to the 1960s and you could’ve seen Peter  Cushing or Douglas Winter (who makes an appearance in A Scandal in Belgravia) as Holmes.  Fast forward to the 1980s and Jeremy Brett is the definitive version of the Great Detective.  In short, modern audiences in successive eras prove that they will watch the exploits of Sherlock Holmes.  And now, in the 21st century, at a time of great international and economic uncertainty, the time seemed right to bring Holmes back.  And part of its dominance in the mind and marketplace today was in updating it to the modern era.

Genre maven Mark Gatiss and contemporary dramatist Stephen Moffat may appear to be an odd fit, but together they melded a new popular version of Sherlock Holmes that has resonated.  Casting Benedict Cumberbatch, who graduated from Shakespeare to television, and Martin Freeman, only recently an escapee from the shadow of The Office, was a masterstroke.  Both play brilliantly against type and both complement each other not only in their character portrayals, but also their physical performance. 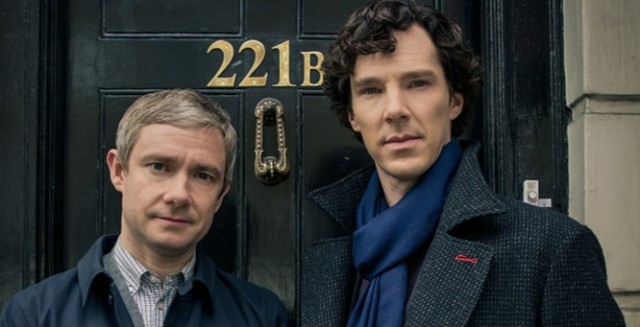 Cumberbatch’s Holmes is a physically imposing, ego driven, cerebral dynamo.  Like the classical Holmes, he has fashioned himself into an instrument of deduction, spurning all extraneous interests that us mere mortals take for granted.  His dubious view of modern life with all its petty distractions are telling and humorous.  This disdain for the ‘normal’ activities and minds around him is charming at first, but later morphs dangerously into a morbid interest in the sociopathic, especially by writer Stephen Moffat.

Freeman presents the everyman to Holmes’ genius.  A war veteran (the Watson of Doyle’s day was a survivor of the wars of empire in Afghanistan – it’s depressing to note that there was absolutely no need to update that for this modern retelling) in search of direction in life, he stumbles across Holmes, and as mismatched a pairing as you’d at first glance believe appears.

Brought together for the home audience in this well packaged three series blu-ray box set, Sherlock Series 1-3 is a sure fire winner.

Unlike the Granada productions in the 1980s featuring the immortal Jeremy Brett, Gatiss and Moffat haven’t attempted a straight adaptation in the Victorian milieu.  As mentioned earlier, they have radically updated the setting (modern da London) and embraced the technology of today, much as Doyle did in the 1890s.  Holmes is a willing participant in the online world, keeping in contact with sources via his mobile phone, and constantly researching the internet.  Watson, instead of publishing his stories in the Strand Magazine (a useful fiction back in the 1890s) instead maintains a blog about his and Holmes’ exploits. 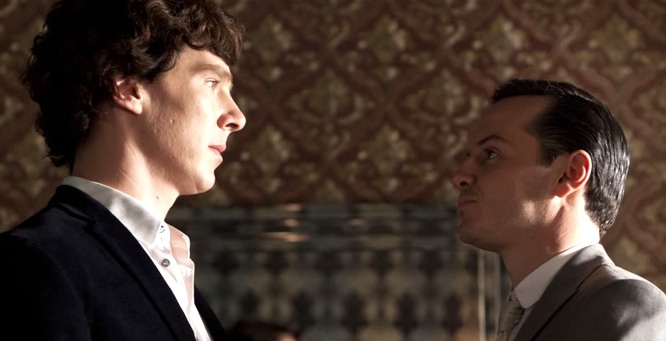 In bringing the series up to date, Gatiss and Moffat have created a mashup of elements of the original short stories, bulking them out with fresh narratives and twists and turns.  The first story, A Study in Pink, cleverly embraces the name of the first Holmes story, A Study  in Scarlet, and completely abandons the Mormon bashing that featured  heavily in that first tale.  There is misdirection, too, in the true identity of Mycroft, and the Moffat audaciously introduces Moriarty at the beginning of the series, setting the scene for the last episode of this first, brief run.

Writer Stephen Thompson rises above his mediocre scripting for Doctor Who and provides us with The Blind Banker, opening up the world Holmes operates in an episode the links nicely to the last in the first series.  We see more of the trademark visual flare the series has adopted.  If ever the storytelling flags, the audience can always appreciate the dynamic camera and design work by the production team.

The all too brief first series culminates in The Great Game, the episode where the series really took off in the audiences mind.  The introduction of Moriarty, the charismatically evil and psychotic criminal mastermind, elevates this story to an entirely new level.  Moriarty is Holmes’ dark mirror, a genius who has turned his gifts to manipulation and mayhem, a man who plays the longest of long games.  Even more interestingly, he enables Moffat to display his flair for audience manipulation and trademark sleight of hand plotting.  Whichever way you see it, this final episode leaves the audience begging for more.

A Scandal in Belgravia

The most famous story in the Holmes canon is the Hound of the Baskervilles.  This modern updating, The Hounds of Baskerville, is written by co-producer Mark Gatiss.  Let down a little at the end by some dodgy CGI realising the hound, this story is a typically solid entry by Gatiss, whose writing rarely sings, but is solidly dependable all the way through.

The Reichenbach Fall is the moment where Sherlock fandom took off in a big way.  The mysteries seeded through series finally germinate in this propulsive episode where Sherlock and Moriarty tangle for seemingly the last time.  Fans captivated by Moffat’s writing frequently find they’ve signed a deal with devil – he will entertain you in the most sadistic of ways, delay the payoff again and again and again until your nerves are like piano wires, then pull the rug right out from underneath you.  The long delay between the screening of this episode and the broadcast of the next left Sherlock fandom on tenterhooks, spending inordinate amounts of time coming up with increasingly fanciful explanations for how Sherlock must’ve survived his Reichenbach fall.

A minisode linking to the first episode of series three.  There are references to Holmes still being alive, adventuring across Europe, the Middle East and Asia.  A nice teaser for the fans, setting up the return of the series.

The first sign that perhaps Moffat’s writing had veered from being merely clever to perhaps outright cruel is shown here in the first episode of series three, The Empty Hearse.  After leaving fans to froth at how Holmes could possibly have survived his ‘suicide’, Moffat leaves them scratching their heads over the explanations offered.  The most alarming thing about the episode is the descent of Holmes into true psychopathy, seemingly unable to understand why Watson might be still steeped in grief over the death of his friend, and enraged at the trick played on him.

More clever clever writing from Moffat in The Sign of Three.  He uses a flashback structure to flesh out the wedding of Mary Morstan (Amanda Abbington) and John Watson (it’s a little known ‘fact’ that most serious scholars of the Holmes’ canon believe Watson may’ve married up to seven times in the stories!)  This time the payoff really works, leaving the audience a little dazed but more than satisfied.

His Last Vow is where the third series goes off the road completely, ending upside down with smoke billowing from the cabin, and the people trapped inside frantically banging at the windows desperate to escape.  Moffat has long seemed to take great delight in writing himself and his characters into a corner, only to escape in a cloud of smoke and devilish laughter.  This time, however, Moffat goes too far, taking the character of Holmes as far as it can go, and then breaking it.  He then proceeds to pull the rug from beneath the audience – instead of outwitting the villain, Moffat has Holmes ventilate the villains wits, literally.  It’s an appalling lapse of judgement, and an abandonment of a character who is driven, but certainly not psychotic.  A disturbing end to the series, and no amount of shenanigans relating to Moriarty at the end can remove the rather sour taste in the mouth this episode leaves.

We go behind the scenes to if the first two series to speak with Moffat, Gatiss, Cumberbatch and Freeman, talking about how they approached this modern day adaptation.  We see footage of the depiction of Holmes in film and television, and astonishingly, an interview filmed with Conan Doyle in 1927 talking about his creation and how he came to be.

Along with a look behind the scenes of this latest adaptation, we go back in time, using archival footage from film and television to show how past generations of film makers brought the characters to life.

Cumberbatch and Freeman expand on their understanding of the psychology of their characters, something that in years gone by would never have been a feature of the characters.  In today’s television, where the drama comes as much, if not more, from the interaction and depiction of characters, as opposed to the action/plot, it is interesting to see how the actors approach their roles.

In essence, this featurette is more than a simple look behind the curtain, but also a serious examination of the approach of the four principals – Moffat and Gatiss, Cumberbatch and Freeman.

Pilot – A Study in Pink

Originally commissioned by the BBC as a 60 minute episode, reportedly for 800,000 pounds.  The BBC then requested a complete rewrite, extending it into a 90 minute film.  The pilot is substantially different to the broadcast version, in tone, look and character.  A fascinating glimpse into an alternative version of the landmark first episode.

A set of documentaries that looks back over the key features of each of the three series, with interviews with the main participants and behind the scenes footage of the production of the episodes.  While a somewhat same same after a while, they all offer an insight into the creative process.

A scene from the series three finale, His Last Vow, shows Sherlock in hospital after being shot, with blackmailer Charles Augusts Mulverton taunting him.

A collection of interviews with cast and crew, from Cumberbatch, Freeman, Moffat, co-producer (and wife) Sue Vertue.  A number of these interviews are in anticipation of the premiere of the series in 2010, featuring cast and crew appearing on a number of BBC interview programmes, such as BBC Breakfast, The Andrew Marr Show, BBC Newsnight.  Much of this concentrates on re-introducing the character, and his updated setting, to a new television audience.  It’s always interesting to see such interviews, as they are usually relegated to the archives and very rarely appear in such features.  The final interview features Moffat and Vertue after the screening of the final episode of series one, appearing together on BBC Breakfast. 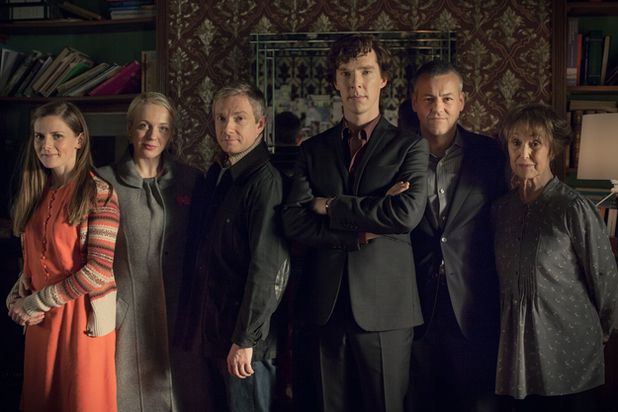 Overall:  5/5 the strength of the adaptations lies in the strength of the original material.  Only cack-handed fools could botch up a modern retelling of the Holmes canon, and neither Gatiss or Moffat fail the challenge.  Embracing the modern world, these nine films are masterclasses in direction, underpinned by strong storytelling and two compelling and loveable characters.  While Cumberbatch’s and Freeman’s careers deny us more episodes more frequently, we are given finely drawn, richly told filmic versions of these timeless stories.

Audio:  5/5 – the sounds of modern day London are brought to vivid life in this well balanced sound mix.

Visuals:  5/5 the direction and visual impact of the series can’t be denied.  Displayed here in all their glory on blu-ray, they are a feast for the eyes.