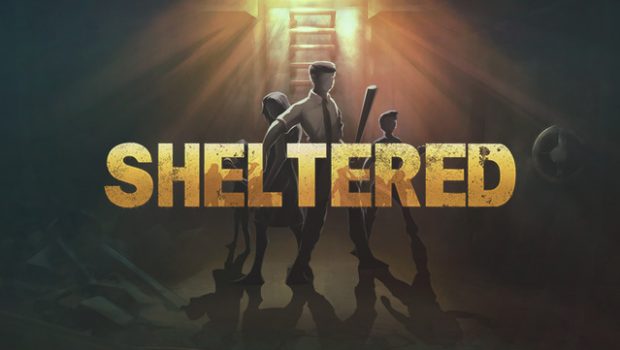 Summary: Resource management in a post-apocalyptic world where every choice you make will determine the fate of your family.

Originally released in 2016 following a successful Kickstarter campaign, ‘Sheltered’, a post-apocalyptic survival game published by Team17, has now made its way onto the Nintendo Switch. In ‘Sheltered’, players control a family that survives a nuclear war by taking refuge in an underground shelter, and your role is to manage resources and scour the fallout-ridden surface for food and fuel to ensure their safety and survival. 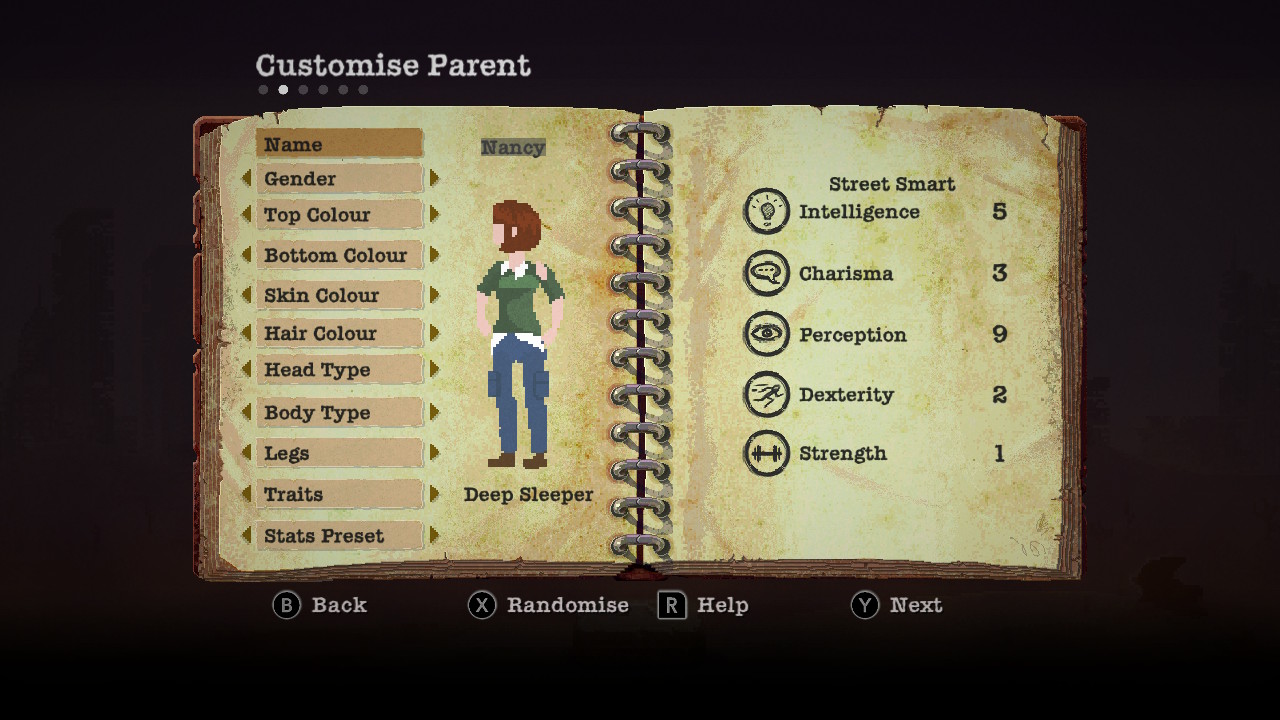 After customizing your ‘nuclear’ family, the game revolves around balancing the use and distribution of life essentials such as food, water and medicine, while maintaining the basic functions that the shelter requires; the power generator and air and water filters, to keep your family alive. As you send brave family members out to scour the wasteland for valuable scrap and materials, you will steal goods from other survivors, and trade goods with passing merchants, to craft items and expand and develop your shelter to keep your family safe, sane, and most importantly alive.

With a multitude of ways for your family members to die, from the expected (starvation or sickness) to the unexpected (insanity or bear attack), ‘Sheltered’ is designed using a random world generator which makes every game unique and ensures each game presents its own set of challenges. And this game can get quite challenging, especially on hardcore mode, providing a real sense of accomplishment for the detail orientated player who can ultimately triumph. 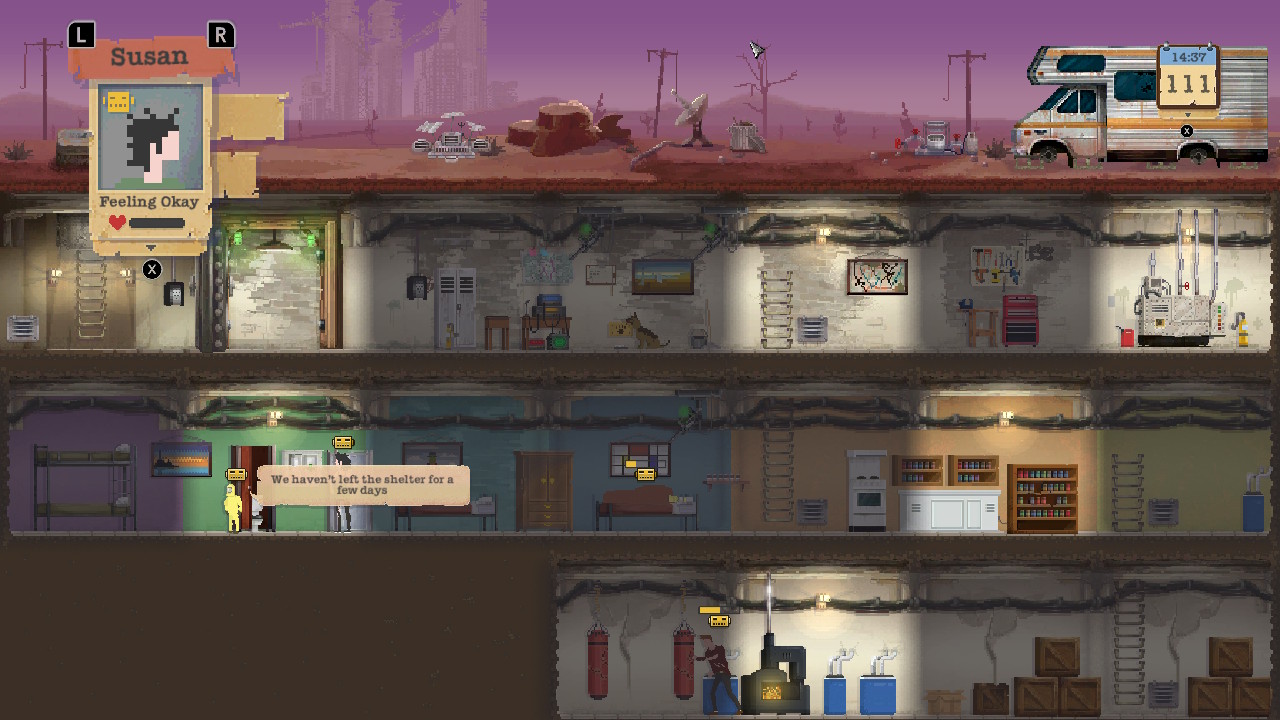 The gameplay is a series of micro-managing tasks which you delegate to your family members. And the slow, grinding resource driven nature of the game is uniquely suited to the mobility of the Nintendo Switch, as you can get some resources gathered while going to work, on a plane flight, or just while you are waiting for a friend. While the Nintendo Switch screen is clear and detailed enough to play the game seamlessly either in the dock on the television, or while on the move around town, the 2D pixel art style used in Sheltered can make things a little hard to pick out.

With a traditional a cut-away view of the bunker, the brown and gray wasteland tones do merge in to one another at times resulting in an unforeseen death, or failure to see the available resource. The audio is all but nonexistent with your characters remaining mute, which makes really connecting with them difficult. However, while this complaint of fair, I appreciate the art style as it keeps the focus on the gameplay, which is truly about managing resources and people in an environment in which there is a scarceness to both. 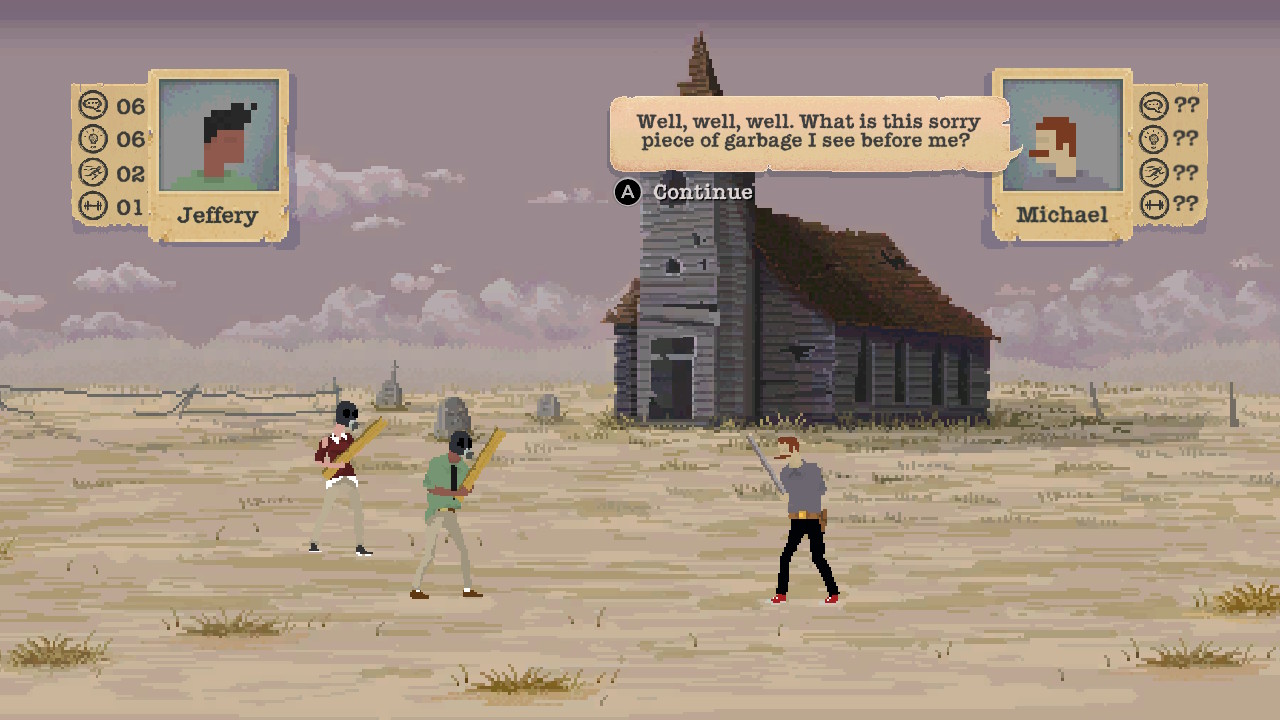 The game is not big on instructions, and with only a very basic tutorial to get you started, you will need to head to the internet forums for an understanding of the layered nuances of the game, as well as an understanding of which things are helpful to build, and which resources which are most valuable. As time and resources are so precious is it usually a simple mistake which will result in an ill-timed death, which sends me scurrying back to the internet to realize what I will do differently next time. Interestingly, often there is not a right or wrong choice, instead often the game requires a decision, with each choice requires a sacrifice of its own. Those decisions form the crux of the loop of the game; gather, fix, build, repair. And, while there is a turn-based combat system, it is rudimentary at best, it is more a fundamental nuisance than a thrill and is certainly not a highlight of the game.

Despite average graphics and audio, ‘Sheltered’ really drew me in and I couldn’t put it down. The gameplay is perfectly balanced, to the point where I couldn’t stop playing as I scrounged for one more wire to add that light bulb, and one more rope to build the snare trap. While I never became particularly attached to my family (as they are relatively bland and faceless), I certainly felt the drama and reality of the scarcity of food and water and the weight of my decisions. Sheltered is a fun and challenging game, especially if you’re willing to put a lot of time into the game crafting the best shelter possible. And because of its randomness world generation, there is plenty of replay-ability with a chance to do it always do it better next time.