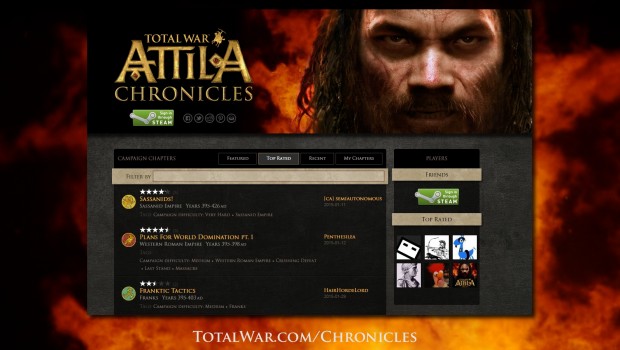 Share the story of your campaign with Total War Chronicles, a brand new feature launching alongside Total War: ATTILA

With the click of a button in-game, players will be able to upload a detailed log of all the key events that have occurred within their campaign to date. Total War Chronicles will automatically receive, process and display this data so players can then log in to TotalWar.com and look back over the trials and triumphs of their game. The app includes a range of interactive features designed to help players explore each of their ‘Chapters’; they will also be able to name, tag and lay out the cornerstones of their strategy by adding commentary throughout their campaign timelines.

Whether celebrating a mighty victory or seeking out tips on playing as a particular faction, Total War Chronicles will act as a hub where Chapters can be shared, rated and, if suitably impressive, be officially featured by the community team.

The app takes its inspiration from a save game analysis tool used in the CA development team, and the Total War community’s enthusiasm for posting campaign AARs (or After-Action Reports) on forums. It will be live to coincide with the release of Total War: ATTILA, and will be further refined based on player feedback.

Total War Chronicles will be freely available on TotalWar.com from February 17th. Watch the following video for further information: http://youtu.be/DmrkHmXs7_8. The app will eventually go live at www.totalwar.com/chronicles.