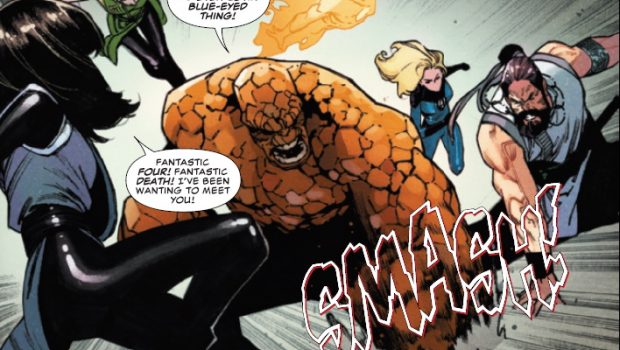 Summary: Shang-Chi and the Fantastic Four have a mild disagreement wouldn't sell as well as having an "epic battle" but it is what it is.

Shang-Chi keeps having dreams of one of his relations in the castle of his youth in the Negative Zone. Getting there is another matter as the only way to do so is to break into the Fantastic Four’s lab and they are not too keen on anyone doing that. Shang-Chi and his team manage to get in and into the Negative Zone only to find that it is not who he is expecting and also they have a fight when they get back to earth.

This is billed as a big fight between the forces of Shang-Chi and the Fantastic Four but in the end it comes down to a mild disagreement. As usual they are selling the sizzle rather than the steak and the main fight was never going to be as big as you would have expected it to be.

The movie is now out so this story seems like it will be continuing on in the background along its own path and I am not sure how much of it will cross over into the movie having not seen it as yet.

The Fantastic Four have been in a lot of comics at this point but have not had much luck the adaptations of their movies. Some things just cannot be translated to screen that well it seems.

If you have been enjoying this series or are a new fan from the movie I would check this one out everyone else maybe wait and see if this one is released in a collection with all the story.