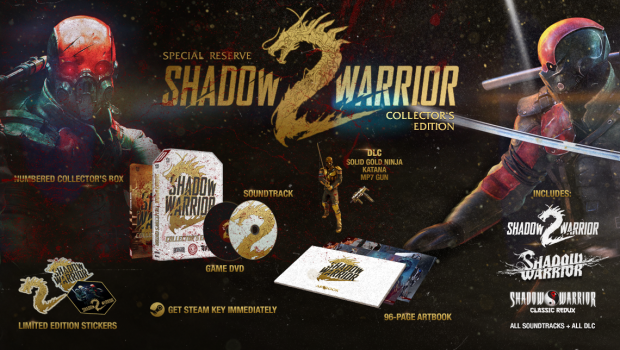 The ultra premium Shadow Warrior 2 set includes the special editions of all three games in the series (the original Shadow Warrior Classic Redux, the Flying Wild Hog 2013 remake Shadow Warrior, and the 2016 Game of the Decade, Shadow Warrior 2), soundtracks, custom stickers, and a brilliant 96-page artbook. The Shadow Warrior 2 Special Reserve Collector’s Edition is limited to 5,000 numbered boxes and each one is adorned with its own unique, randomly generated blood splatter because of course it is, c’mon.

Shadow Warrior 2 is the stunning evolution of Flying Wild Hog’s offbeat first-person shooter following the further misadventures of former corporate shogun Lo Wang. Now surviving as a reclusive mercenary on the edge of a corrupted world, the formidable warrior must again wield a devastating combination of guns, blades, magic and wit to strike down the demonic legions overwhelming the world he inadvertently corrupted.

Remarkably bigger in every way than its predecessor, Shadow Warrior 2 has been designed as an open, vertically scalable world to explore. Each new unique environment is jaw-droppingly gorgeous and hosts a procedurally generated loot system so no two playthroughs will ever be the same. The game features up to four-player co-op because hacking someone to death in the face is more fun with friends.