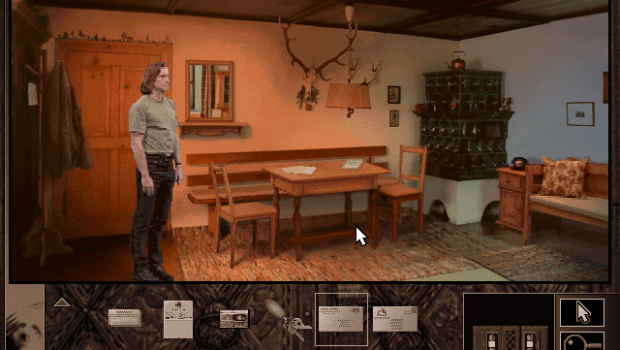 LANCASTER, Pa. – October 8, 2013 – In 1993, a rash of ritual voodoo murders took place in the swamps and back alleys of New Orleans. With local police baffled, only one man was equipped to solve the case: Gabriel Knight, owner of a French Quarter bookstore, struggling novelist, and an unwitting descendent in a long line of shadow-hunting Schattenjägers. Armed with little more than a sacred dagger and talisman, his N’awlins drawl, and his own irresistible brand of charm, Gabriel Knight quickly became a gaming sensation when Sierra On-Line released his first adventure, Gabriel Knight: Sins of the Fathers®, in December 1993.

Twenty years later, the charismatic Schattenjäger is making a welcome comeback thanks to the work of Gabriel Knight® creator Jane Jensen’s indie development studio, Pinkerton Road LLC, which licensed the Gabriel Knight IP from Activision Publishing, Inc.. The Gabriel Knight: Sins of the Fathers 20th anniversary edition is planned for a mid-2014 release as a digital download for PC, Mac®, iPad®, and Android™. The game is being reconstructed from scratch with all new retina display quality visuals and voice recording, in a development process overseen by Jensen.

“I’m thrilled to be back at work on Gabriel Knight and to bring this classic game to a new generation of players,” says Jensen. “It’s a designer’s dream to be able to enhance the game and bring in more New Orleans flavor than technical limitations allowed us to in 1993. It’s going to look and feel like a brand new title. But never fear, 100% of the original Gabriel Knight: Sins of the Fathers is here. I hope both existing fans and new players will love it.”

The revamped Gabriel Knight: Sins of the Fathers will feature the same mature storyline and puzzle solving as the 1993 version, with research assistant Grace Nakimura, the inept Detective Mosely, and the local color of New Orleans supporting Gabriel’s paranormal investigation. Stunning high-res (2048×1536) 3D graphics will replace the original 640×480 resolution pixel art, presenting the authentic New Orleans environments with more detail than ever before. The remake will also have a remastered soundtrack by Robert Holmes, the game’s original composer, and will include special edition content.

Pinkerton Road has been working on the Gabriel Knight: Sins of the Fathers 20th anniversary edition under the working title “Mystery Game X” for about a year. The studio also has a brand new adventure game, Moebius, slated for release in 2013.